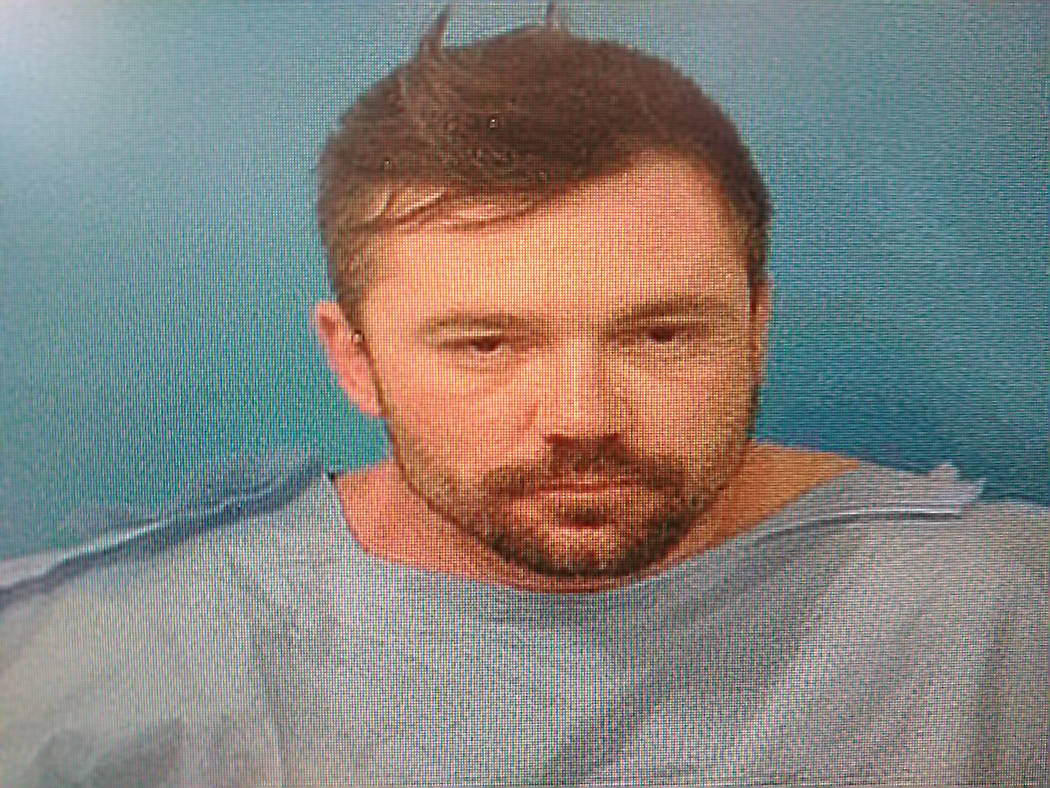 Special to the Pahrump Valley Times As determined as he was, local resident Steig DeSantis could not escape custody of Nye County Sheriff's deputies as he now faces several charges following his early January arrest. DeSantis was ultimately charged with two counts of escape by felony prisoner, probation violation and possession of a Schedule I drug.

A local man attempted to escape from custody, not once, but twice earlier this month, Nye County authorities report.

The events began on Wednesday, Jan. 3, following what appeared to be a routine traffic stop at the intersection of Basin Avenue and Linda Street just after 9:30 p.m.

According to a Nye County Sheriff’s Office news release, the man, identified as Steig DeSantis, was driving a white Chevrolet SUV, sans license plate lights when he was pulled over by a deputy who noted DeSantis did not have any identification at the time.

The deputy also noted that DeSantis was acting fidgety, while his hands were uncontrollably shaking.

At that point, DeSantis was asked to exit the vehicle, while the deputy conducted a warrants and records check though Nye County dispatch.

The deputy’s report went on to state that DeSantis continued to act fidgety and began to get aggravated, as the deputy informed him that he was under arrest on a parole and probation warrant.

“DeSantis got more aggravated and stated he doesn’t have a warrant, and that he was done with parole and probation,” the deputy stated. “I told him to stand in front of my patrol car and not to move. I conducted a quick pat down of his clothing and located a small pocket knife in his right pocket. I then pulled the passenger out of the vehicle. The passenger did not have any identification on him. As I began to retrieve my pen and paper to identify the passenger, DeSantis started to run. I immediately informed dispatch.”

The deputy, who was accompanied by a Sheriff’s Office Explorer ride-along, commanded DeSantis to stop running.

“I gave multiple commands for DeSantis to stop running, but he ignored my commands and (continued) to run,” the deputy’s report stated. “I then yelled four times that I was going to taser him if he didn’t stop running. He was continuing to put distance between him and I, while ignoring all of my commands.”

Moments later, the deputy decided to use his taser on DeSantis.

“Due to DeSantis being a known violent offender, and I had not yet identified the passenger of the vehicle who was alone with my Explorer ride-along, I deployed my department issued taser on DeSantis to get him back into custody, due to the Explorer I had riding along with me was by himself, and unarmed with an unknown male riding around with a violent parole and probation offender. I had to get DeSantis back into custody as quickly and as safely as I possibly could, as well as get back to my Explorer rider to make sure my rider was not harmed.”

After deploying the taser on DeSantis’ back and left arm, the deputy immediately requested medics to the scene.

“I asked DeSantis why he ran,” the deputy noted. “He stated because he didn’t have a warrant and wasn’t going back to jail for nothing.”

During a search of DeSantis, the report indicated that the deputy located a sunglass case, allegedly wrapped in DeSantis’ clothing.

“Inside the case, I located two small baggies containing a crystallized white substance,” the deputy’s report stated. “I asked DeSantis what it was. He replied ‘dope.’ I then asked what kind of dope it was, and he stated that it was crystal meth. I conducted a field test on the white crystallized substance which tested positive for methamphetamine. Both bags containing methamphetamine weighed 3.05 grams. DeSantis was arrested on escape by felony prisoner charges and subsequently transported to the Nye County Detention Center.”

Roughly four hours after his arrest, DeSantis was transported from the detention center to Desert View Hospital after complaining of severe stomach pain.

As a result, another deputy was assigned hospital watch duty at approximately 1:30 a.m., on Jan. 4, to keep an eye on DeSantis, who allegedly made another unsuccessful escape attempt.

The report stated that DeSantis was going to have a bowel movement and ask to use the restroom.

The deputy then transported him to the restroom.

“When DeSantis was finished, he indicated that something fell out of his boxers into the toilet,” the deputy’s report stated. “DeSantis indicated that it was narcotics. When I looked away from DeSantis and into the toilet, he began to run in a sprint towards the ambulance entrance of the hospital. I yelled at the DeSantis to stop and he refused and continued to run.”

The deputy, according to the report, managed to catch DeSantis as he was running to the hospital’s first set of exit doors.

“I grabbed him from the rear and ordered him to the ground,” the deputy noted. “He did not comply with my orders and was forcefully taken back into custody.

“Desert View Hospital then completed their evaluation of DeSantis and he was released. DeSantis was then transported back to the detention center where he was booked accordingly.”

DeSantis was charged with two counts of escape by felony prisoner, probation violation and possession of a Schedule I drug.