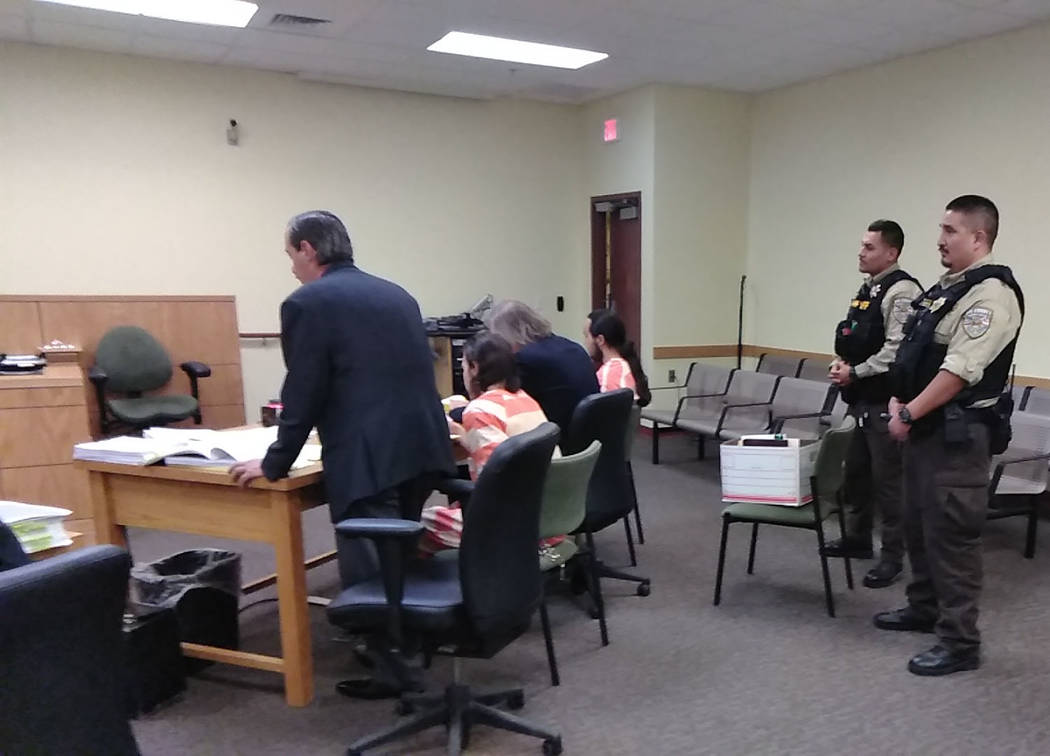 After listening to more than a half dozen witnesses testify, Pahrump Justice of the Peace Kent Jasperson decided there was enough sufficient evidence to bound two teenage murder suspects up to district court.

Michael Wilson and Dakota Saldivar, both 17, are facing charges of murder, conspiracy to commit murder and domestic battery with a deadly weapon.

Local authorities said the teens stabbed and beat their mother, Dawn Liebig, 46, to death because they did not like her parenting style.

The stabbing and bludgeoning attack lasted for roughly a half-hour while Liebig fought for her life, the teens told investigators.

Both were arrested in the early morning hours of Aug. 1.

A tall order for defense

During the two-and-a-half-day preliminary hearing that concluded Sept. 6, Defense attorneys Carl Joerger, representing Wilson and Harry Gensler, representing Saldivar, had a challenging task ahead of them trying to convince Jasperson of their clients’ innocence, despite the fact that the brothers actually confessed to their roles in the murder while speaking to a Nye County Sheriff’s detective prior to their arrest.

Both Joerger and Gensler cited the corpus delicti rule, which they argued, prohibits the admission of an extra-judicial confession into evidence in a criminal case unless the prosecution introduces evidence independent of the confession, that a crime described in the confession actually occurred.

“Proving a crime is otherwise known as corpus delicti,” Joerger argued. “If a death is thought to be caused by criminal means where a person is charged with a crime by causing that death, before he can be held for trial, two things must be proved by sufficient legal evidence before a grand jury, if an indictment was sought, or before a magistrate such as you. Number one, they must prove the fact that a crime was committed and number two, probable cause must be established that the person committed it.”

Additionally, Joerger and Gensler actually questioned whether the body, located in a shallow grave near Liebig’s Wedgewood home was even that of Liebig.

“The detective signed a search warrant to have the body taken from Pahrump to the Las Vegas coroner’s office to get DNA evidence,” Joerger told Jasperson. “We have no DNA evidence to show that this is who this person is reported to be, after their statements. We don’t have the coroner here to say the cause of death. What she did before anybody possibly stabbed her, we don’t know. There is no cause of death.”

Gensler, meanwhile, expanded on Joerger’s theory regarding their clients’ confessions and the identity of the body located in the grave, where the teens led the detectives.

“To reiterate with what Mr. Joerger said, you have a body, but through the co-defendants’ statements, we don’t know who the body is. You don’t know the cause of death,” Gensler said. “We are talking theory that because these guys said it, then that means they stabbed their mother to death. You could come up with the theory as well that this was a dead body and they stabbed the body after the body was dead.”

The defense counsel’s arguments, as compelling as they were, were not enough to convince Jasperson of the teens’ innocence.

“I disagree with you,” Jasperson told the defense. “I think that the state has met its burden of proof in regard to corpus delicti. I think there was conclusive independent evidence, outside of the confessions, to believe that there was a death that was caused by the defendants. Whatever they have on videotape, in addition to that, once the deputies began to interact with them and they admitted to killing her, I believe there was even testimony on one of the video cameras. When they began to stab her, the first thing she said was no, no, stop. So we know she was alive when they started to stab her. I don’t think it was a question that they were mutilating a dead body. You do not have to prove a specific cause of death.”