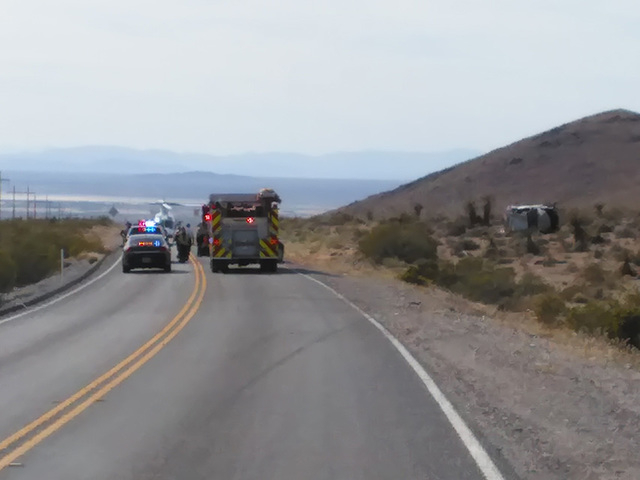 A Pahrump woman was flown to UMC Trauma in Las Vegas with life-threatening injuries after losing control and rolling her vehicle roughly 25 yards into the desert just before 4 p.m. on Wednesday.

Nevada Highway Patrol Trooper Daniel Pineau said the woman was traveling northbound along the highway near the town of Crystal when she left the roadway.

“She overturned several times and was ejected from the vehicle,” he said. “The female suffered major injuries. This is still under investigation, but it appears that she may have been driving above the posted speed limit. She appeared to be in her 40’s.”

A landing zone was established on the highway for Mercy Air crews, who arrived on scene shortly after the crash.

Traffic was halted in both directions for roughly 45 minutes as emergency crews tended to the woman who was described as breathing, but unconscious.

It is unknown whether alcohol or drugs contributed to the rollover, Pineau said.