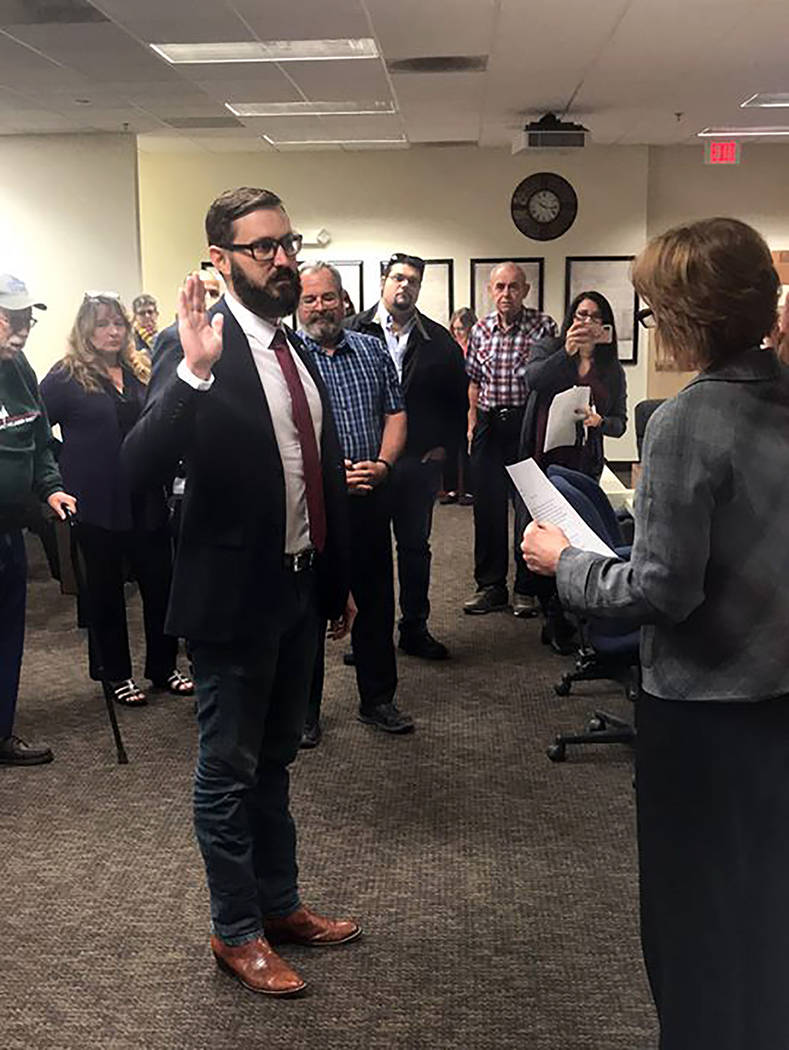 Special to the Pahrump Valley Times Greg Hafen II is pictured taking his oath of office in front of Nye County Clerk Sandra Merlino and officials from Nye, Clark and Lincoln counties. He was sworn in at the request of Nye County Commission Chairman John Koenig and will likely be sworn in again once he goes to Carson City. Photo courtesy of Nye County. 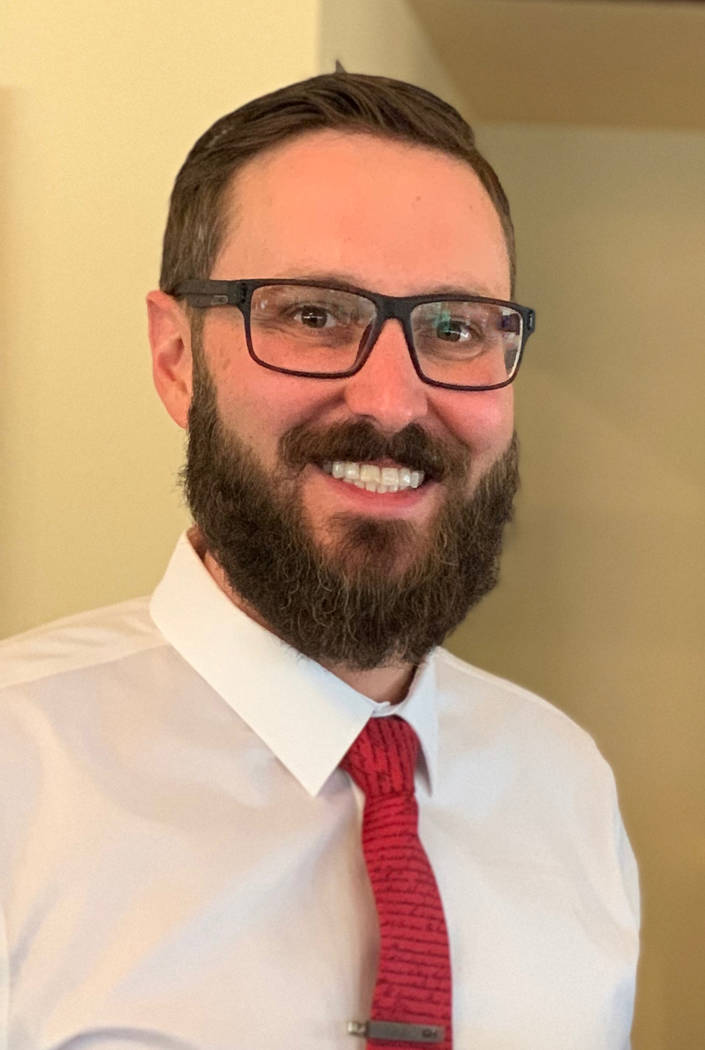 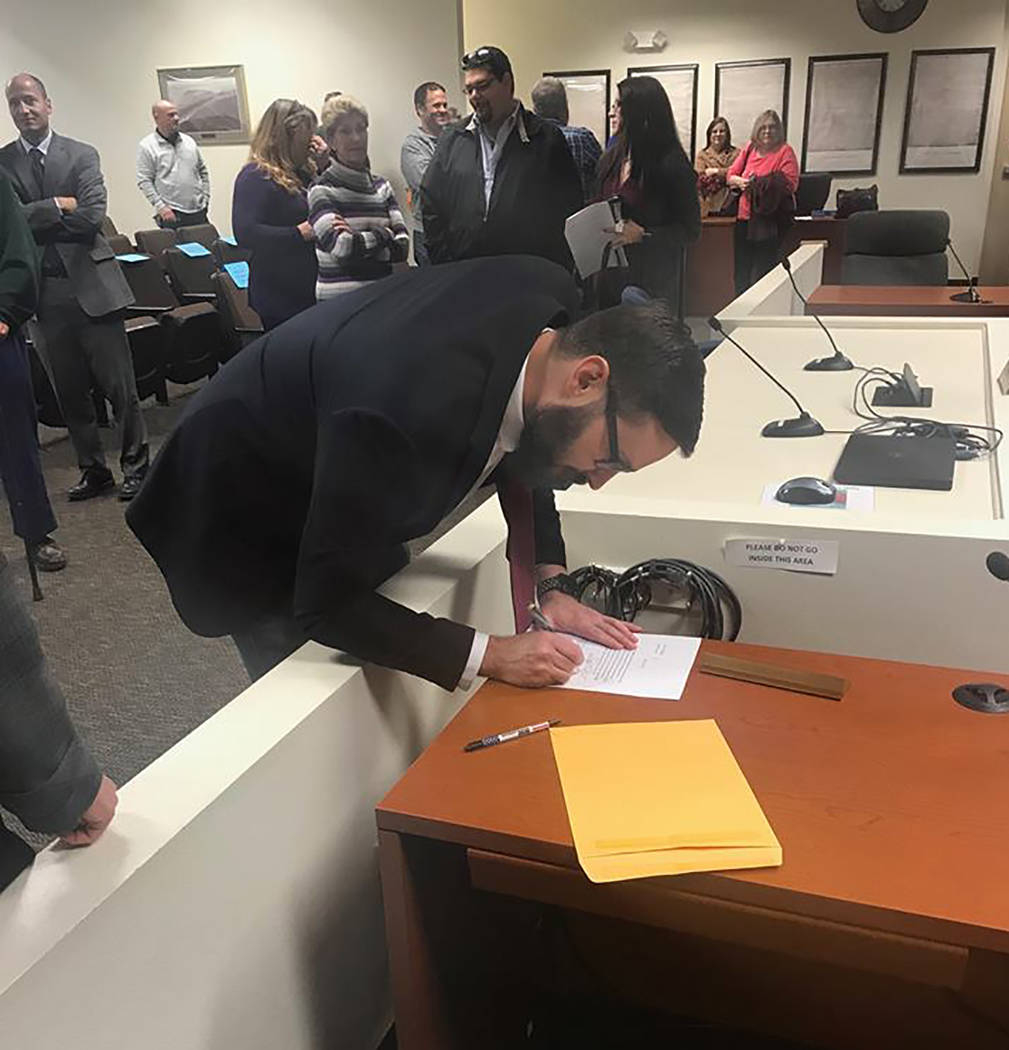 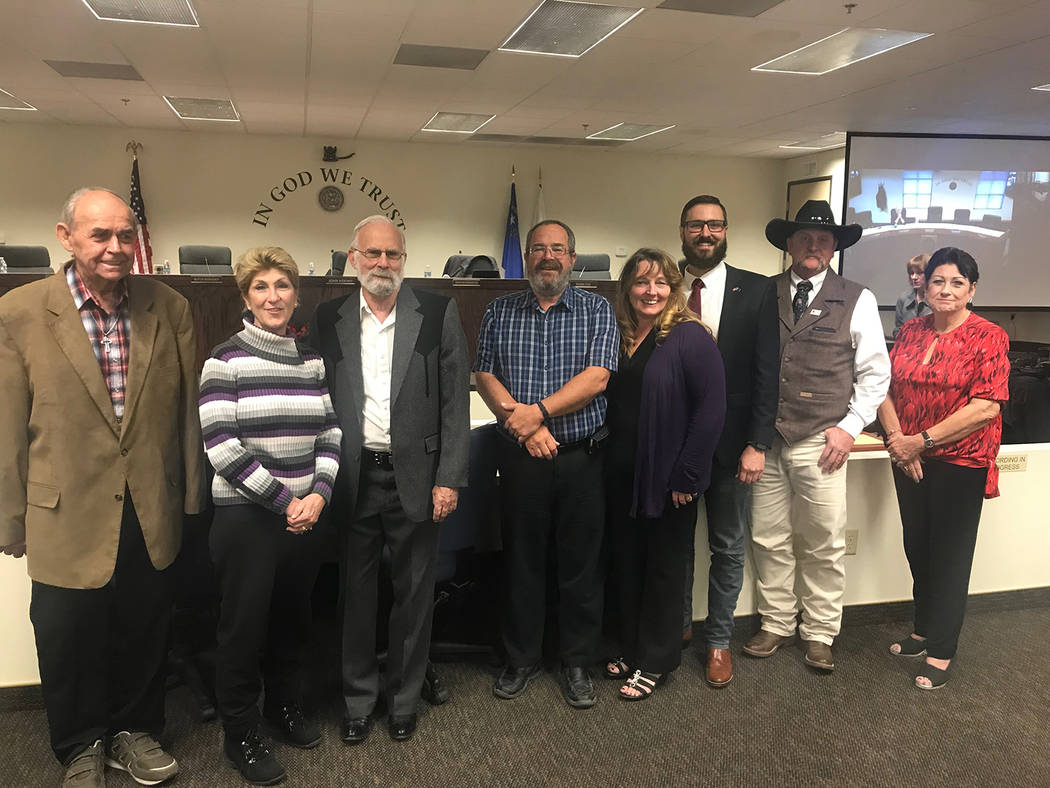 Special to the Pahrump Valley Times Greg Hafen II, third from right, poses for photos with commissioners from Nye, Clark and Lincoln counties following his appointment to the Nevada legislature. Photo courtesy of Nye County. 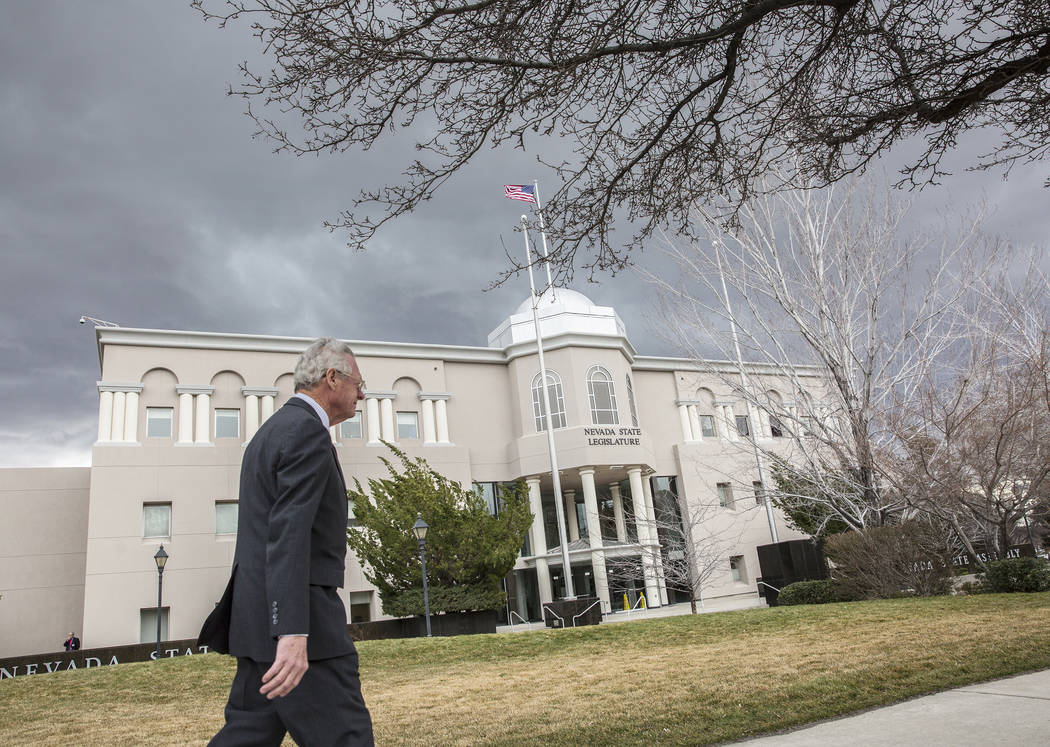 The appointment of Greg Hafen II as Nevada District 36 Assemblyman was confirmed on Friday, Dec. 7 and he is wasting no time, hitting the ground running in order to ensure he is as prepared as possible for the legislative challenges ahead.

The 2019 legislative session is set to open in February next year and Hafen said he is striving to get a solid handle on the many and varied aspects involved with this elected office. There is a lot to learn but Hafen said he is not daunted by the task he is facing. Rather, he expressed confidence in his ability to get the job done.

Hafen sat down with the Pahrump Valley Times on Wednesday, Dec. 12 to discuss his legislative vision and goals in office. Though only days had passed since his appointment became official, he was already immersed in preparations for the coming year.

“Obviously I am kind of behind all of the other assemblymen and senators, so I have been playing a lot of catch-up and I am still trying to get up to speed with all the different training classes. I spent most of Monday going over a four-inch thick binder of information. The LCB (Legislative Counsel Bureau) and the Assembly caucus have been great, they have been very helpful trying to get me everything I need.

“Being on the planning commission, I have been through the ethics training and all those things but it’s different for legislators so I spent a half an hour on the phone with the LCB yesterday and I have an hour and a half phone call scheduled for Friday to catch up on all that I have missed,” Hafen explained.

As for the actual work of the Legislature, Hafen is gearing up for that as well, with several Bill Draft Requests already under his belt.

“Bills were due Monday, so those have already been submitted,” Hafen said, indicating a list of bills that he was sponsoring for the 2019 session. “A big focus for me is education. We are at the bottom in terms of education and I don’t really see any reason for that, at all. Being a new dad, it’s high on my priority list to move the state’s education program up on that list. I want to ensure that not just my son but all children have an opportunity for a better education.”

One of the bill draft requests he put in for is to revise provisions to expand workforce development opportunities for K-12 pupils. Internship opportunities and job shadowing programs would be the goal, allowing students to be exposed to real-world experience and a variety of career avenues.

Establishing provisions to attract medical professionals for the state was another area of interest for Hafen. “We have a shortage of doctors and medical professions, specialty care, in this state,” Hafen detailed. He noted that he was not entirely certain how the bill would come together but the concept overall is to provide potential loan forgiveness for those who have attended medical school in Nevada, then stay and work in the state for a certain number of years after graduating.

Along those same lines, Hafen wants to co-sponsor a bill to increase the medical residency program in Nevada. Many of those studying in the medical industry leave the state to do their residency, he said, so he’d like to see more of those professionals remaining in Nevada.

Taxation of marijuana is yet another subject Hafen is pursuing, with clarification on how that process is supposed to work the main point. “I don’t know the definitive answers on that but it’s something that needs to be worked out,” he said. “We need to have clear idea of who has the authority to tax it, who is doing the enforcement and inspections, etc. My understanding is that it is clear in the incorporated areas but not so clear in the unincorporated areas.”

Another Bill Draft Request Hafen submitted is to adjust provisions governing elections, specifically targeting the way primary election are handled in Nevada. In some cases, only one party will have a say in who is elected, such as was the case with Nye County Commission District 5 and Nye County public administrator this year. Changing that to allow all voters to have a voice is important, he remarked. He is not the only lawmaker to consider this change either and this bill may be combined with another of a similar nature.

On water, Hafen said he believes there are a few different bills that will address this all-important issue during the 2019 Legislative Session but at this time, he cannot say whether he will be in support or opposition to those bills.

“We won’t know what the bills are actually meant to do until the bill language has been drafted,” he said, noting that he will obviously be paying close attention to such subjects while in office.

Being a legislator in the state of Nevada is hardly a lucrative enterprise, with Nevada legislators making very little in comparison to lawmakers in many other states in the U.S.

According to the Nevada Legislature’s website, “Legislators are paid a salary for the first 60 days of a regular session and for up to 20 days of a special session. Under Nevada Revised Statutes 218A.630, the minimum daily salary for legislators is $130. For legislators elected on or after November 8, 2006, the compensation of the office of the Senator or Assembly member is increased by an amount equal to the cumulative percentage increase in the salaries of the classified employees of the state during the immediately preceding term of that office.”

Various sources, such as the National Conference of State Legislators, peg the amount those elected in mid-terms years are currently making to be about $146 per day.

The website details that legislators are also entitled to a per diem allowance, intended to cover lodging, meals and incidental expenses. The maximum per diem pay is $142 per day. During times when the legislature is not in session, legislators also receive daily pay and per diem pay for travel expenses for attending conferences, training sessions, meetings, seminars or other gatherings at which the legislator officially represents the state or the Legislature.

For reference purposes, in 2017 Assemblyman James Oscarson made roughly $10,700 in total pay, while the previous year, 2016, he saw only $3,666, according to Transparent Nevada.

While there may be controversy and contention trailing his appointment and a lawsuit with the goal of disrupting the appointment still pending, Hafen said he tries not to focus on the negative, and instead, will continue to push forward as best he can.

“I kind of believe that those who have the ability to do something also have a responsibility to do that and I think that I have that ability. That’s why I got on the planning commission because I’m very involved, from the time zoning came into place and the ins and outs of changing things and working at that,” Hafen concluded. “I had extra time on my hands to do things like that and I feel that giving back to the community with things I am good at is something that is important. It’s important to me and to my family.”

Hafen invited constituents to contact him with questions or concerns via email at assemblymanhafen@gmail.com