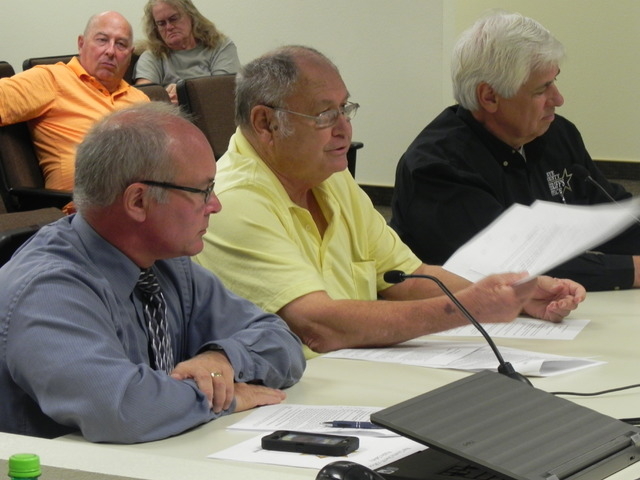 Nye County Commissioners on Tuesday approved the creation of a peace officer advisory review board, an issue in the campaign for sheriff. However, the proceedings of the review board will be closed to the public.

However, the findings and recommendations of the panel of the review board will be public record unless covered by state and federal confidentiality laws.

The board, which is scheduled to become effective Nov. 10, may review citizen complaints against an officer and refer them to the sheriff’s office, and may review the findings of internal investigation of an officer and make recommendations to increase or decrease discipline given.

Nye County District Attorney Brian Kunzi said a lot of changes were made to the original board proposal, adding language regarding officer’s appeals to comply with the collective bargaining agreement. The citizens’ review board was requested by Commissioner Frank Carbone.

The county manager will determine if the review board has jurisdiction over the matters submitted.

County Commissioner Butch Borasky had concerns over the cost because the review board members are entitled to the same travel expenses and subsistence allowances as county officers. Kunzi said they would be paid per diem costs, but County Manager Pam Webster said they would only be reimbursed for out of town travel; she estimated the board may only cost $5,000 to $10,000 per year.

While members of the board have to undergo training, Kunzi said most of that will be done in-house by the district attorney’s office, they will have to be informed mostly about the Nye County Sheriff’s Office collective bargaining agreement.

“This is just to help the cops,” Wilson said. He said officers accused of violations are put on paid administrative leave.

“The board is going as far as it can go as far as the restrictions placed on us by statute,” Kunzi said. “This board has nothing more than the ability to make recommendations with regard to punishment that was given or punishment that was not given. Where this benefit comes in is the findings and conclusions of the board are a public record and you will therefore have a public record with the determination made with regards to an officer’s conduct.”

“I feel very strongly that type of recommendation from this board will carry a lot of weight with discipline toward those officers,” Kunzi said.

Sheriff Tony DeMeo said only violations of policy will go before the board.

“The only thing we can listen to or address are violations of policy, not violations of law,” DeMeo said. “That is a different venue altogether.”

During the sheriff’s campaign, candidate Sharon Wehrly said the citizens’ review board was her suggestion. Both her and opposition candidate Rick Marshall, the assistant sheriff, emphasized they didn’t want it to be a rubber stamp for the sheriff’s office.

During a sheriff candidates’ debate at the Bob Ruud Community Center on Oct. 14, Marshall said the board wouldn’t be a rubber stamp but would be able to hear results of internal investigations and have authority to make recommendations.

Wehrly said she’d prefer a review board that would not only hear the results of internal investigations but be able to initiate investigations of their own.