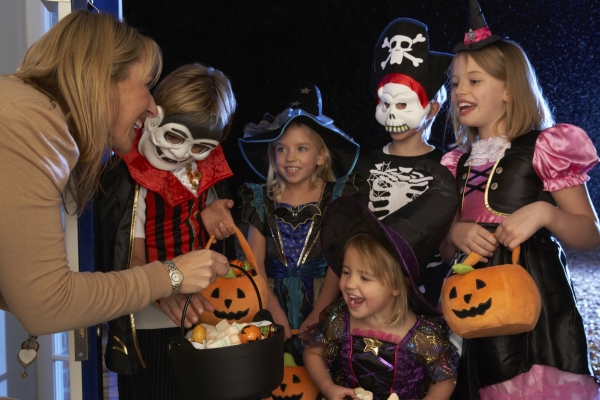 With children and their families planning to be out and about during the evening hours celebrating Halloween by trick-or-treating, area law enforcement wants residents to know they will be out aiming to make it a safe holiday.

The Nye County Sheriff’s Office will be increasing patrol presence throughout Nye County communities for Halloween.

“Halloween is a fun time in Nye County but let’s make it a safe time as well,” Wehrly said in a released statement. “The major dangers are not from witches or spirits but rather from falls and pedestrian/car crashes.”

Wehrly reminds residents of all ages to take heed of the following Halloween safety tips.

Motorists should watch for children darting out from between parked cars, walking on roadways, medians and curbs and should enter and exit driveways and alleys carefully.

When nighttime falls, the county motorists are warned to watch carefully for children wearing dark clothing.

Parents are urged to create plans before their children head out to try and accumulate as much candy as they can in those few hours of going door-to-door.

The sheriff’s office cautioned that parents should make sure younger children have an adult or older youth supervising them.

Planning and discussing the route trick-or-treaters intend to follow and knowing the names of older children’s companions will help keep kids safe and curb the chance that a child will become lost while out.

Parents should inform their children to stay in familiar areas and to only go to homes and apartments complexes that are well-lit. Also, children should be warned to never enter a stranger’s home.

Parents of older kids who will be out trick-or-treating without their supervision should ensure their child trick-or-treat in a group so they can watch out for one another.

Parents should establish a return time, so they aren’t left worrying about when their child will come home and if something may have happened to them.

All children should know their home telephone number and how to call 911 in case of an emergency. Tell your youngsters not to eat any treats until they return home. Parents should also write the child’s name, address, and telephone number on a piece of paper to be kept inside a child’s pocket in case the youngster gets separated from the group.

Children are cautioned to walk, not run, from house to house and to not cross yards and lawns where unseen objects or uneven terrain can present tripping hazards.

While traveling by foot from residence to residence, children should walk on sidewalks, not in the street. If there are no sidewalks, walk on the left side of the road facing traffic.

The sheriff’s office will be paying extra attention to neighborhoods where trick-or-treating is prevalent throughout Nye County to ensure children are safe and has various plans of enforcement for the different areas in the county.

In the southern part of the county, Nye County Search and Rescue will be assisting with staffing the neighborhood near the Pahrump Winery where there is always a high presence of trick-or-treaters.

Sheriff’s Auxiliary members will be assisting with staffing the Mountain Falls neighborhood, another popular area for trick-or-treating.

The Division of Special Services will also be participating in Halloween activities throughout the community.

In central Nye County, sheriff’s deputies will be patrolling for safety and security of Beatty residents during Beatty Days, which is taking place this weekend as well.

The Nevada Highway Patrol will also increase its patrol of the state’s highways targeting impaired drivers.

“Please make sure your children do not ride with anyone who has been drinking,” said Trooper Loy Hixson, publich information and education officer for the Nevada Highway Patrol.

There have been four traffic deaths and 304 crashed during the past two Halloween days in Nevada.

If residents take these precautions and implement them into their Halloween plans then everyone should have a safe and ghoulish time this weekend.