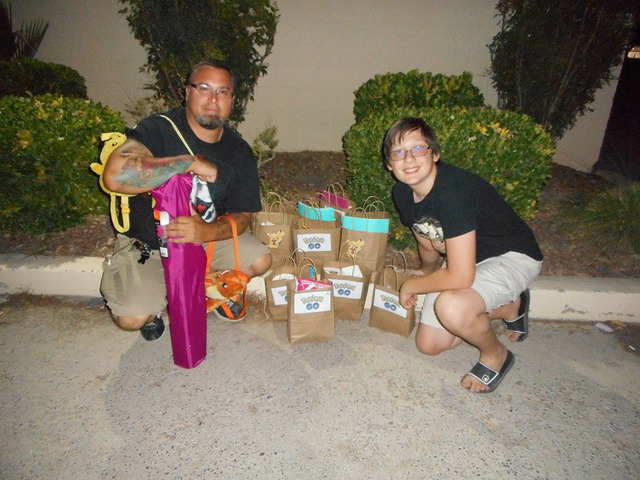 Jason Riendeau and Alex Torres help put together care packages that Pokémon Go player can hand out when they run across the homeless while playing the mobile game. Linda Zukowski/Special to the Pahrump Valley Times

Pokémon GO seems as if it has taken over lives, the internet, and the news feeds this last week.

For a number of people in Pahrump, its no different. They have taken to the streets hunting those Pokémon nearly every night since it came out. With stories about people falling off cliffs and running into things, it can be hard sometimes to see that all Pokémon players want to do is catch em all, which is the catch phrase of Pokémon.

But it has had a side benefit in our own community. In just two days, our local Pokémon GO players have found a way to help the homeless in our town.

While it has been stated that people are getting up from their couches and out from behind their computer screens to get actual exercise while hunting their Meowth or Charmander, it came to the attention of some of the players that there are a larger number of homeless in our community than they first thought.

Pahrump resident Carrie-Anne Harrington saw the issue and decided to try and do something about it. Harrington, who goes by the handle Gwyleena in the game, posted on the Facebook group called Pahrump Pokémon Go Stop on Thursday, July 14, with a suggestion to bring the homeless some water and other needed items in the parks where Pokémon Go players might venture.

It seems like we treat the homeless as though they are invisible, Harrington said. The most hurtful thing you do is treat someone as if they are invisible. And even though we cant fix it all, we want all the people in our community to know we see them.

Within minutes, several others offered help. They created an event on Facebook for last Saturday night, July 16, at 8:30 p.m., to bag up supplies to hand out to the homeless. About a dozen people showed up to help and bring items to bag up for those in need. Several players took bags that were not immediately handed out with them to hand out over the course of the next week or month to those they meet while hunting that elusive Pikachu.

With no homeless shelter in Pahrump, these Pokémon GO players then decided to make it a monthly event on the third Saturday of every month. Tyler Cooper, who goes by Zaamcore, and his wife, who goes by Lunafalls Wolf, know firsthand what it is like to be homeless. They explained exactly how important it is to get hygiene products, such as toilet paper, toothbrushes and toothpaste, and even feminine products.

Another player, Jason Riendeau, who goes by Bodydropped1 and is also from Pahrump, helped organized places for those who want to help out but dont play Pokémon GO to donate items.

When the idea of having drop-off locations came about, he quickly texted owner Kris Su of Java Junkies, located at 460 S. Highway 160, who said he would be glad to be a drop-off place. By Sunday afternoon there were two more business owners in town stating they would be drop-off places: Back to Roots, located at 2341 E. Postal Road, Suite B, and Precious Slut Tattoo 1, located at 401 S. Frontage Road, Suite 5.

If you would like to help out, you can visit the Catch em All, Help em All Facebook page (@catchemallhelpemall) to find out more.