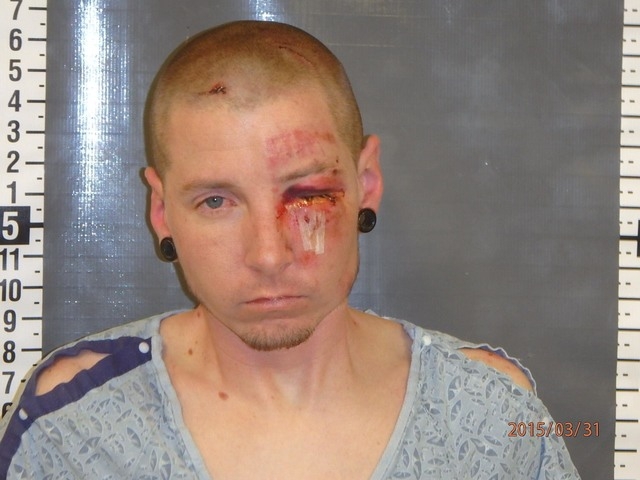 The felon who led police on a high-speed pursuit along the streets of Pahrump late Monday evening, made his initial court appearance on Wednesday.

Jeffrey Allan Horton, 28, wearing standard jail garb and shackles, did not have much to say appearing before Judge Ron Kent.

“Sir, you are charged with serious crimes, which could very well result in your long-term incarceration.” Kent told the defendant.

Horton faces 11 separate charges ranging from evading/eluding a police officer with disregard, to carrying a concealed firearm without a permit. He is being held in the Nye County Detention Center on $27,500 bond.

Considering the seriousness of the charges, Prosecutor Michael Vieta-Kabell said Horton should receive some type of bail on the cases, including an additional charge he received late last month.

After hearing from the prosecutor, Kent scheduled a hearing for Horton on the assault with a deadly weapon charge for April 6.

“This is alleged to have occurred on or about October 25, 2014,” Kent said. “This court will enter a not guilty plea on your behalf Mr. Horton.”

According to the Nye County Sheriff’s Office, Horton was traveling at speeds in excess of 100 miles per hour, in 45 mph zones after a deputy tried to make contact with him in the area of Medicine Man Road and Barney St.

The deputy, according to the report, spotted the suspect riding with no helmet and unreadable license plates which initiated the attempted traffic stop.

Horton, police said, failed to yield at numerous intersections, while at times he appeared to wait for police vehicles to catch up with him before speeding away on the 2003 high-performance Yamaha RS 600cc street bike.

While being handcuffed, police said Horton’s hands had to be pulled away from his front waistband where deputies learned Horton had a concealed Glock 27 40-caliber handgun with 13 rounds in the clip. Horton was transported to Desert View Hospital for treatment, then booked into the detention center.

Further investigation, revealed Horton was a convicted felon and prohibited person since November 2012.

The additional charge owning or possessing a gun by a prohibited person was attached to his charges.