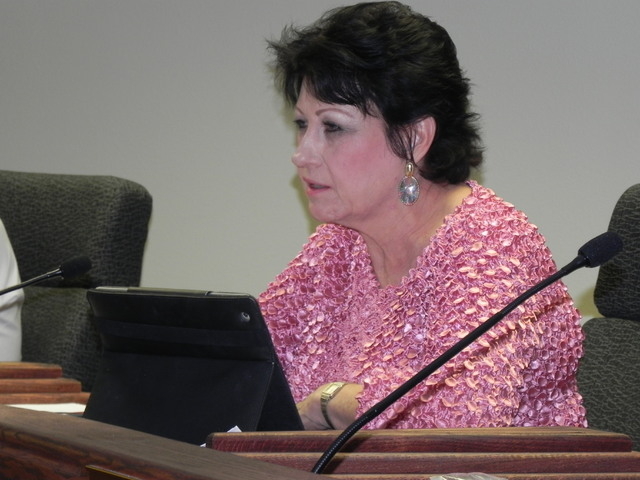 When it comes to accepting state and federal grants for law enforcement crackdowns, Nye County commissioners have traditionally voted in favor, with the exception of first-term Commissioner Donna Cox.

On Tuesday, Cox carried on her tradition and voted against a $21,499 U.S. Department of Justice Byrne Justice Assistance Grant to provide money for sheriff’s deputies to work overtime trying to intercept drugs on highways like state highways 160, 372 and 95. It is good for two years and doesn’t require a county match. Assistant Sheriff Rick Marshall, in his request, said the county has participated in the grant program for 15 to 20 years.

Despite her objections, the other four commissioners voted to accept the outside funding.

The state program targets violators of seat belt laws, not buckling up children in passenger seats, driving under the influence of alcohol, distracted drivers and speed laws.

The Selective Traffic Enforcement Program (STEP) must be located based on the number and severity of crashes or violations in the past year. A minimum of two officers must work a site for a minimum of two hours, the STEP program highly encourages a minimum of two stops per hour per officer.

“It’s not against the law to be intoxicated as a passenger in a vehicle, so we don’t give tickets for that unless it’s violation of the stipulation for probation or parole,” Marshall said.

Cox outlined her opposition vote to the two grants to the Pahrump Valley Times afterwards.

“For one thing they’re grants and most grants come with strings attached and some of the strings are not very good for the public. All these grants come out of somebody’s pockets they’re not free and I also don’t believe in building a police state and I have some real concerns with what direction some of these grants are actually going to go in the future. First it started out with it’s going to be volunteer seat belt law and now look at where we’re at,” Cox said.

“Now we have to have a grant to enforce the seat belt law,” she said. “I think we have too much government control as it is and at some point people are going to have to take control of themselves.”

Cox is president of the Concerned Citizens for a Safe Community, a group originally formed in opposition to the construction of the federal detention center in Pahrump, which holds weekly meetings on a variety of topics. Cox said most motorists wouldn’t want to drive without a seat belt on many roads in Nye County without shoulders where drivers roll over into the desert.

Regarding the drug interdiction program, Cox didn’t think the program was effective.

“They cannot show me after spending all this money we have any less drugs than we ever had.” she said.

Commissioners did vote unanimously in favor of accepting a $5,828 U.S. Department of Justice State Alien Criminal Assistant Program grant for the cost of housing undocumented aliens who have committed serious crimes.

Nye County was one of 857 out of 3,140 eligible entities that successfully applied for the grant. Marshall said it is reimbursement for housing 35 inmatesin the past year for anywhere from one day to six weeks, who were then turned over to U.S. Immigration and Customs Enforcement.