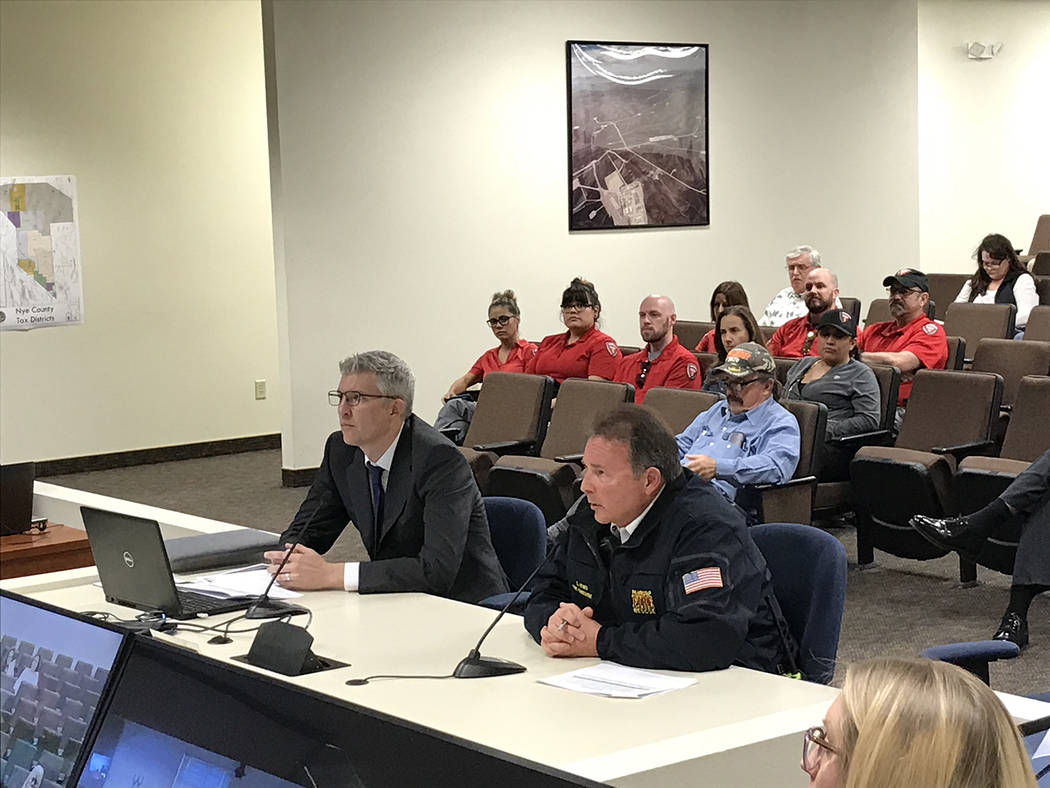 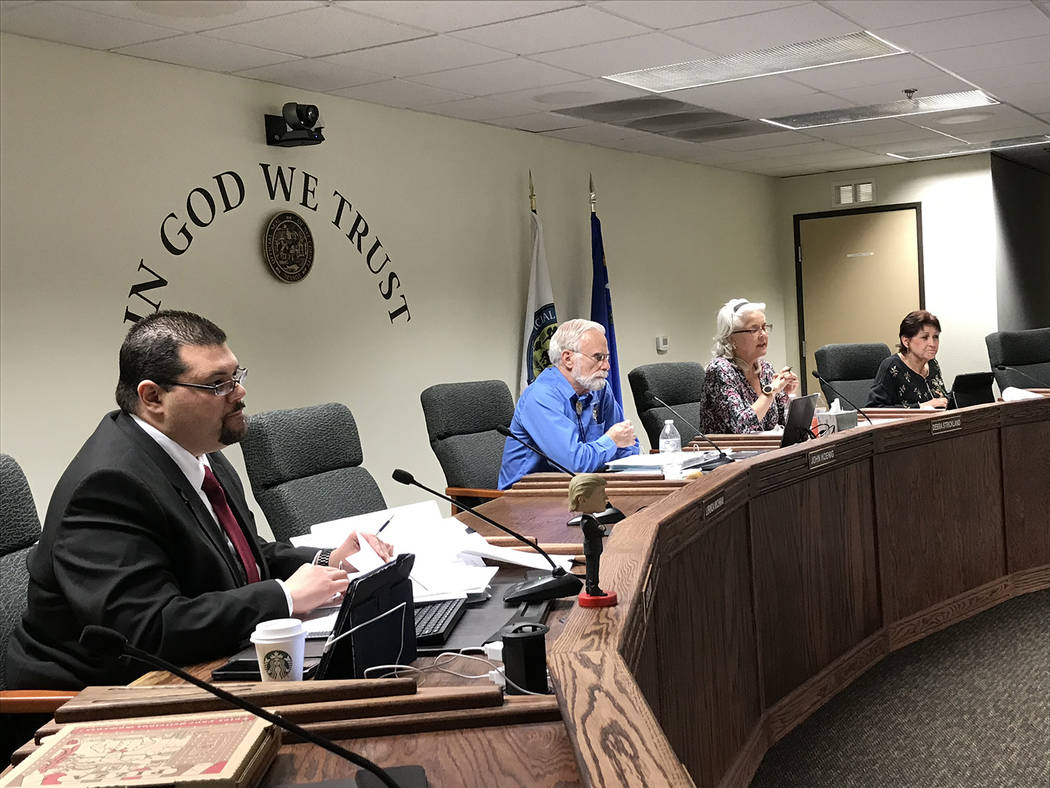 Pahrump is now poised to have its own private ambulance service, following a split decision by the Nye County Commission to allow OptimuMedicine, a Las Vegas-based company, to provide medical transport services to the town.

It was an agenda item that came with plenty of lengthy debate, much of which was contentious and argumentative.

The agenda item was pushed for by Nye County Commissioner Leo Blundo, who had originally brought the concept before the board last year. The county decided to conduct a needs assessment to determine if the town would be best served by allowing a private ambulance service and though that assessment has not been finished, Blundo sponsored the Feb. 19 agenda item in an effort to move the situation along.

Company representative Devon Eisma told the commission, “OptimuMedicine is a little bit of a unique company. We were started by a group of clinicians, paramedics, nurses, and we were self-funded. We’re not a venture capital fund, we don’t have any trust-fund kids. We set out to start a business to make a difference in something we believe in.”

Eisma stated that OptimuMedicine is more than aware of the benefit that flight programs provide to a community and is not striving to supplant current transport services. The mission, he said, was simply to allow for another level of service in medical transport for the community. Specifically, the company was looking to provide Critical Care Transport, or CCT, which is not available through Pahrump Valley Fire and Rescue Service, the only entity up to that date that had been authorized to conduct medical ground transports.

“There are lots of patients that would benefit from a critical care transport ambulance,” Eisma said, adding, “The cost… is less than 10 percent of what Mercy Air charges or what a flight service would charge.”

Fire Chief Scott Lewis was obviously against the item, starting off by stating as to Critical Care Transport, “In the event that CCT were something that the board wanted to explore, one of the first things we could do is, we could bolster our existing service and make it a CCT paramedic level, that’s not difficult to do.” That, however, would come with expenses, while allowing OptimuMedicine to come in would cost the town and county nothing.

Blundo jumped in to say, “The goal here is to bolster our medical services and get more medical services here for people in the Pahrump Valley. I think this could be a first stage in alleviating some of the stresses that could potentially be at the fire department with the ambulance service.”

“I have difficulty comprehending such a level of push-back when I am just trying to bolster and add to, with a private organization, a private company, a third party that can address some of the extra stuff, the outlying stuff,” Blundo later stated. “It won’t take away anything from the department or the services we are providing here.”

Lewis said the proper procedure would be to finish a needs assessment, then conduct a Request for Proposal process, before making any decision on allowing a private service to enter Pahrump. Nye County Commission Lorinda Wichman seemed to agree with Lewis, asking why the county had gone about the item backwards.

Blundo replied that there is no need for a needs assessment for businesses such as Home Depot and he did not see why a private ambulance service, for which the town and county would pay nothing, would require one.

“We’re not procuring a service, it’s not going through the county, there’s no cost to the county, it has nothing to do with the county or government, except for the fact that the chief is currently operating that sector and there is a roadblock and challenge between here and there,” Blundo declared.

Wichman responded, “That explains it… That’s exactly the answer I was looking for, thank you.”

Lewis then interjected, “I just have to take exception to that last comment (by Blundo). ‘The chief’ is not throwing a roadblock in this… We don’t have the ability to dictate to the hospital who they are going to use for their services… That’s been the argument from the beginning. But we’re still doing that here.”

Blundo said he understood that fact but it did not bother him. “Here’s the difference. If I grant them (OptimuMedicine) a license and the hospital still says no, that’s now on them, on a private business. That’s not our concern.”

“You’re giving the impression through this discussion that Desert View Hospital will be utilizing this group,” Lewis argued. “We need to make certain, absolutely clear, that Desert View does use people outside, they have an approved vendor use, that’s who they use.”

Blundo then turned to Eisma to ask if patients at Desert View Hospital would have the opportunity to specifically request transport by OptimuMedicine or any other transport that they desired. Eisma said yes, that was accurate, remarking that the company had already had one such request that had been fulfilled.

Blundo also asked Eisma is OptimuMedicine would try to take over the local EMS and Eisma said no, that was not the company’s desire.

Blundo continued by asking if there would be a loss of revenue to the fire department by giving up inter-facility transports and Lewis stated yes, it absolutely would effect the department’s revenue stream.

Nye County Commissioner Donna Cox chimed in to state that she has a personal reason for supporting the idea of a private ambulance service, as her husband, when suffering with heart issues, did not have any option but Mercy Air when he fell ill. She also noted that she believed Lewis and the fire department team do an excellent job locally and she felt it would be beneficial to the department in terms of reducing the stress to firefighters and EMTs.

“I fully believe there is room for all of us here and I think it is the best thing for the citizens of Pahrump for us to have extra choices, especially in this,” Cox stated.

Blundo made the motion to determine that OptimuMedicine may furnish a private ambulance service in Pahrump. The motion passed 3-2 with Blundo, Cox and commissioner Debra Strickland in favor and Koenig and Wichman against. Both Koenig and Wichman remarked that their vote was simply because they would prefer to wait for the needs assessment to be completed.

According to the discussion on Feb. 19, OptimuMedicine has been in operation in Las Vegas for about 18 months. The company plans to offer one or two ambulances per day to start, with additional resources available in Las Vegas if they are needed. Staffing levels would be quite robust, Eisma said, with the hope to grow its service over time.