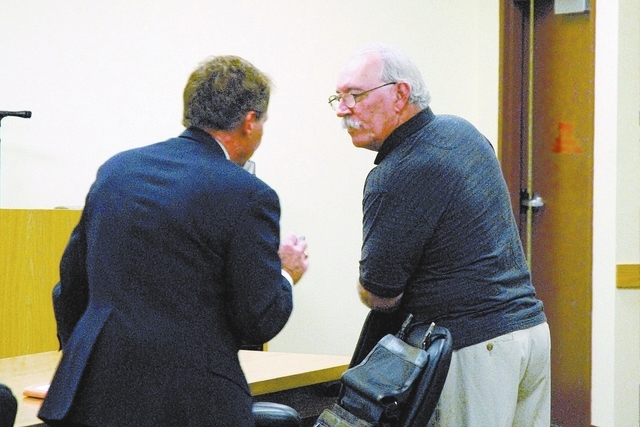 A man charged with possessing child pornography on his home computer last year will have his case heard by the District Court after a Justice of the Peace found enough evidence to bind the case over.

James Marshall appeared in Pahrump Justice Court Thursday morning for a preliminary hearing on charges of possession of child pornography following his March 28, 2012 arrest at his Pahrump home.

According to testimony from the hearing, Det. David Boruchowitz went to the address to investigate the allegation and met with Marshall and his wife.

He said the couple allowed him to come into their home and to look at a laptop Marshall allegedly told police was the only computer in the residence.

Boruchowitz testified the laptop appeared newer than the computer he would be looking for, and had very few files on it. He said he asked if Marshall had an Internet router in the home.

The detective said Marshall told him he did, but that it had been unsecured until recently when he secured it, but agreed to allow him to view it after they put a pet bird away.

The detective said he then heard a lot of loud banging noises and what sounded like furniture moving in the room Marshall and his wife had gone into before they allowed him to enter a few minutes later.

Inside the room, the detective reportedly found a desktop computer hooked up to the router, which he said looked as though someone had recently tampered with it.

“The desktop had obviously been tampered with, the actual hard drive cables had been pulled from the hard drive,” Boruchowitz said. “The panel was removed…The cables coming from the power and the router were covered in dust throughout that entire back of the desk area and on those cables pertaining to this computer they were specifically dusted as though someone had removed them.”

The detective further added when he plugged the computer in and attempted to turn it on that the operating system informed him the necessary hard drive to operate the computer was missing.

Marshall then allegedly allowed Boruchowitz to search through that room and the couple’s master bedroom for the missing drive, before asking him to leave unless he had a search warrant to continue looking through their home.

Marshall’s defense attorney, Tom Gibson, then asked why it took a few minutes before the detective left the home following their request and why he hadn’t left the residence immediately, to which the detective replied their conversation had continued and he left as soon as it was finished.

After Marshall and his wife stopped the consent search of their home, Boruchowitz obtained a telephonic search warrant for the residence and police resumed their search soon after.

The detective testified, however, that between the time he left the home and returned with a search warrant, the other hard drive that had been present in the computer during his earlier search had gone missing.

When he confronted Marshall about the missing hard drive, he said Marshall told him there was no evidence and that he wouldn’t tell him where it was.

He then testified Marshall later agreed to show the detective where the hard drive was and led him outside where a broken hard drive was found lying in the dirt.

The hard drive was collected as evidence and sent for analysis to the Nevada Attorney General’s High-Tech Crimes unit for analysis.

After a prosecutor finished questioning the detective about his investigation, Gibson asked if Boruchowitz had paid more special attention to this case because his client has a relative at the Nye County Sheriff’s Office, to which the detective responded he paid as much attention to the case as he does any other.

Following Boruchowitz’s testimony, Chris Defonseka, a computer analyst with the AG’s computer crimes unit, took the stand to testify about his analysis of the hard drive.

According to the analyst, the controller board on the hard drive had to be replaced when his office received it; the one on the drive at the time had been severely damaged.

After they replaced the board with a similar make and model, he testified he was able to view the contents of the drive.

The analyst testified he then made a copy of the suspect drive onto a clean one and then ran a computer program over the copied data to see if there were any images or other files that may be child pornography related.

The analyst additionally testified that at least two video clips of child pornography, which District Attorney Brian Kunzi entered into evidence at the hearing, had been saved to the hard drive the day before and the day the hard drive was seized as evidence by police.

Defonseka also told the court that he found two user profiles on the hard drive as well under the name of James Marshall and several peer to peer Internet file-sharing programs, over which child pornography is sometimes allegedly shared, as well.

Gibson asked the witness if it was possible that someone else could have used the computer under his client’s user profile, to which Defonseka said it was possible. The defense attorney also asked if it could be possible the alleged images and files could have made their way onto his client’s computer through a virus or malware he may have picked up somewhere else on the Internet, and the analyst replied that too could be plausible.

Following the witnesses’ testimony, Gibson argued there was no direct evidence showing his client was the one who had physically downloaded the alleged images onto the computer and as such asked the charges against his client be dismissed.

“Nothing indicates that Mr. Marshall had personal knowledge that those items were on his computer and I would ask the charges be discharged,” he said.

Kunzi, however, argued that Marshall’s actions of allegedly attempting to damage and hide his hard drive from police indicated otherwise.

“Based on what we see here today, we have a computer that’s in Mr. Marshall’s home, with Mr. Marshall’s user account. You can talk about who else might have had access to the computer, but there is plenty of other evidence of guilt in his deception, his false statements, his attempts to destroy and hide the evidence. If there wasn’t any child pornography known to Mr. Marshall on that computer, there certainly would be no reason for him to rip it out and bury it in the backyard to keep the detective from finding it,” the district attorney told the court.

Justice of the Peace Kent Jasperson subsequently ruled that the state had met its burden of showing at least slight or marginal evidence to support the charges on file against Marshall and ordered the case be bound over to the District Court.

Marshall is scheduled to appear for an arraignment on Jan. 24, 2014.