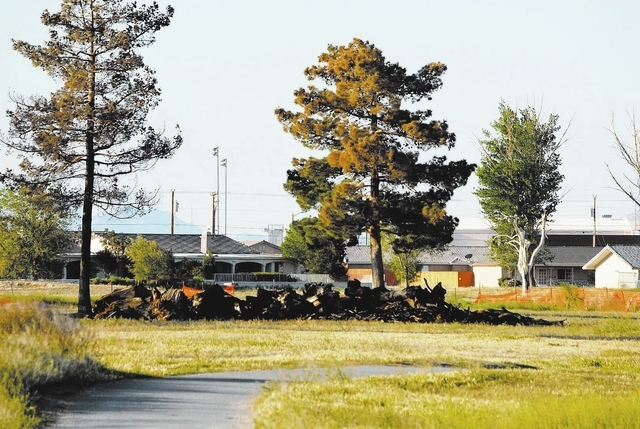 In a hearing item that lasted less than two and a half minutes, PUC Chairman Alaina Burtenshaw, who is from Pahrump, told the board the situation at the former golf course has lasted for four or five years. UICN discharges effluent from a sewer plant at the golf course for use at Willow Creek, which closed in November 2008, and Lake View Executive Golf Course, which is still open, under a Tri-Partite Agreement approved in 2000.

Burtenshaw said the most recent property owner, Caldera P &G, owned by Jim Scott, filed for bankruptcy. UICN was given possession of 15 of the 16 parcels on the former Willow Creek course in bankruptcy court. Burtenshaw said parent company Utilities Inc. would finally have some authority over the use of the effluent; previously golf course owners were responsible for the pipeline and use of the effluent.

“This would allow them to finally for the first time since UI has owned this company, to actually have ownership of the place where the effluent is going to be used as well as the actual effluent in one party’s hands,” Burtenshaw said. “The ponds out there have been a serious issue in the district court out there as well and the person who had owned the property and was responsible for taking care of the ponds had some issues obviously, they were in bankruptcy court.”

Two overflow ponds which are connected to the existing receiving pond will be taken out of service. These ponds will be cleaned, liners removed and the ponds filled in. Existing overflow pipes will be capped. UICN said the overflow ponds were not permitted.

Pump stations which serve Willow Creek and Lake View golf course will be repaired; the pump house buildings will be removed and pumps and filters replaced. The pump stations and receiving ponds will be enclosed by a chain link fence.

The existing, unlined ponds on the Willow Creek property will be maintained and remain in service.

UICN estimates they will irrigate 80 acres with spray irrigation at Willow Creek Golf Course during the winter months when there is more sewer demand. The company is also bound by agreement to supply Lake View Executive Golf Course with 425,000 gallons per day of the average 600,000 gallons per day of treated effluent. Supplemental irrigation water may be required during high demand summer months. The status of the Willow Creek irrigation system is unknown.

UICN estimates the cost of the improvements at $1.27 million, with pond and pump house construction estimated to take place sometime in the second to fourth quarter of 2014.

The Nevada Division of Environmental Protection, Nye County and the State Clearinghouse for the Nevada Department of Administration Division of Budget and Planning are also required to sign off on the plan.

Burtenshaw said comments at the consumer session in Pahrump primarily dealt with phase two of the project, the PUC was only addressing phase one at the Wednesday hearing. She said UICN will be presenting another amendment to their integrated resource plan to deal with phase two.

At the consumer hearing in Pahrump Oct. 30 members of the Red Rock Audubon Society extolled the virtues of the former golf course for bird watching. Audubon Society member Richard Cantino said the receiving ponds were in dire need of remediation and the entire course was overrun with weeds that could become a fire hazard. Cantino said the course had 5.2 miles of former golf cart paths that could be used for walking or jogging trails.

A couple of residents asked why the property couldn’t be reopened as a golf course.

Lake View Golf Course LLC Secretary Doug Shaw said the phase one plan was the best option to remediate the ponds and give them a reliable source of water. He said the water pipeline from Willow Creek was sometimes clogged due to debris.

UICN Regional Director Wendy Barnett told a small crowd at the consumer session she can’t make any promises what they will do with the former golf course property. She has to ensure safe and reliable operation of the sewer plant first, then she can work with the community on phase two.

“They’ll bring us another amendment to deal with phase two. Phase two is what are we going to do with the 16 parcels out there and how are we going to use that to further utility service,” Burtenshaw told the PUC board.