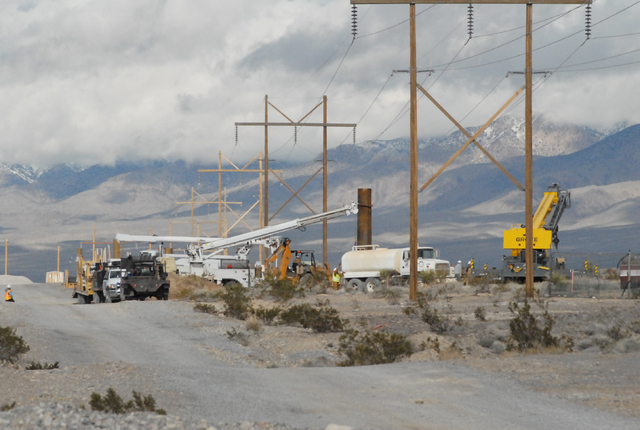 Public Utilities Commission regulatory staff have recommended up to a $95,000 fine against Valley Electric Association for starting construction of a transmission line and facilities before obtaining PUC approval. The work was performed as part of a $61.6 million contract to serve the Nevada National Security Site.

The PUC claims VEA began construction of the Innovation Project on Sept. 17, 2013 and completed work Oct. 25, 2013. It included a new 5.3-mile, 138-kilovolt transmission line. The commission didn’t issue an order approving the project until Dec. 20, 2013. Nevada Revised Statutes allow fines of up to $1,000 per day for each failure to obey a commission order, the period of 95 days between the start of construction and the issuance of the order means VEA could be fined up to $95,000.

Attorneys for VEA said facts in the docket don’t support a fine larger than $1,000.

VEA argued it shouldn’t be assessed a fine because the cooperative didn’t put the Innovation Project into operation prior to obtaining PUC approval. The utility also referred to a 1963 agreement that can’t limit activities requested by the U.S. Department of Energy on a federal enclave, which was backed up by numerous federal court decisions, rendering state regulatory law moot due to the pre-emptive power of the Supremacy Clause in the U.S. Constitution.

The state Legislature later passed a law ceding jurisdiction over the test site to the U.S., which was accepted by the Atomic Energy Commission Nov. 22, 1968.

A 1963 agreement between Nevada Power Company and the Amargosa Valley Cooperative Inc., the predecessor to VEA, designed to settle a boundary dispute, provided no party will extend its facilities within the Nevada Test Site, now known as the Nevada National Security Site (NNSS) without advising the other party in writing. VEA said the work was a reliability upgrade, not an extension of facilities.

The 1963 agreement allows the PUC to have meaningful input on the location of facilities at the NNSS to provide for safe, economic, efficient, prudent and reliable operation and service of public utilities, PUC Assistant Staff Counsel Jordan Pinjuv wrote in a filing dated June 4.

Arguments that VEA didn’t extend its facilities because it didn’t put the Innovation Project into operation before commission approval and arguments physical construction wasn’t synonymous with an extension of facilities renders the 1963 agreement meaningless, Pinjuv wrote.

The PUC argues Valley Electric hasn’t shown evidence DOE activities or electric service to the NNSS will be affected by enforcement of the 1963 order, ruling out arguments about the federal enclave, the commission attorney states. Arguments VEA acted in good faith isn’t a factor in determining whether a violation occurred, but could be a factor in determining the amount of the fine, Pinjuv said.

PUC staff said there needs to be additional discussion, not in this docket, about a section of public law requiring purchases of electricity by a department, agency or instrumentality of the U.S. to be consistent with state law, including state utility commission rulings and electric utility franchises or service territories.

VEA asserted the Innovation Project didn’t threaten the safety, efficiency or reliability of electrical service. Instead, it will result in significant reliability benefits once energized.

“This argument rings hollow for multiple reasons,” Pinjuv wrote. “The commission was not given an opportunity to assess the Innovation Project prior to it actually being built. Had the commission found that the safety, efficiency or reliability of the electric grid was put at risk, it would have had no opportunity to address those concerns prior to construction. Instead, VEA’s construction without approval left the commission with limited options: approve the project or modify an already built structure.”

VEA replied they could’ve been ordered to abandon the new transmission line if the electrical grid were threatened.

The commission attorney added when VEA began constructing the Innovation Project there was no way to predict whether the project would rekindle the boundary dispute with Nevada Power, which was supposed to be avoided by the 1963 agreement.

VEA said it didn’t have an effect on the utility service territory boundaries. Nevada Power unsuccessfully sought to acquire an exit fee when VEA took over the NNSS contract, but didn’t object to the Innovation Project, the co-op said in a reply brief filed June 20.

The PUC did acknowledge Valley Electric took other steps in the docket case to demonstrate good faith bringing operations into compliance with the order, without elaborating. The commission also agreed with VEA the Innovation Project was the first known violation of the 1963 agreement.

In 2007, the PUC fined Enel Salt Walls LLC $50,000 for constructing a six-mile, 230-kilovolt transmission line without receiving a permit under the Utility Environmental Protection Act (UEPA). The company paid $25,000 while the additional $25,000 was held in abeyance for two years, pending any additional violations. Enel Salt Wells self-reported their UEPA violation, a factor that was important in establishing the amount of the fine.

In 2001, EOPT Power Group Nevada began construction on a utility facility prior to the issuance of a UEPA permit, the company agreed to a $20,000 fine, which was held in abeyance.