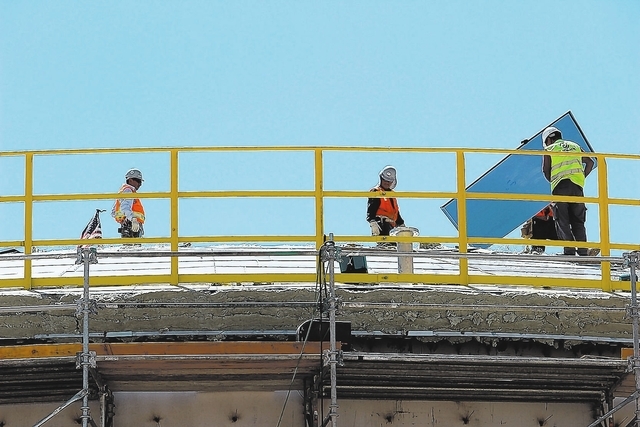 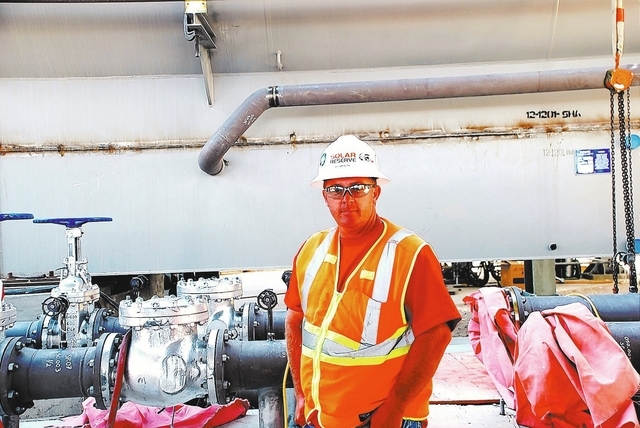 TONOPAH — A hiring boon happened in Nye County when SolarReserve began clearing land outside of Tonopah in September 2012 for a new solar facility boasting new technology. Now, only months from a grand opening, hiring continues, and new employees are coming onboard daily.

As of Labor Day, 17 jobs were posted on the website but SolarReserve officials said many other positions are opening as the drive to complete the project on time continues. Right now, three round-the-clock crews of 20 each shift, are working to install the heliostat mirrors which will beam sun rays to the 643-foot collector tower. Fluid will absorb heat from concentrated sun rays. Of the 10,348 heliostats in operation, more than 5,000 are installed, but SolarReserve Field Foreman William Allen said, “We still have a long haul ahead of us. Also, we get wind, which creates a challenge.” Allen referenced the mirror’s diametric plane being similar to a kite.

Locally, organizations like NyE Communities Coalition’s Brownfield’s training, is working to educate those enrolled for jobs at SolarReserve and in mines and rescue operations and other businesses anywhere. A group of students from the training will visit Crescent View Solar Plant outside Tonopah to become more informed about what is available for them once they have completed their training.

Classes are still open for the January schedule.

For instance, SolarReserve has and will continue to have their own fire and rescue brigade. In the approximately 300 days SolarReserve has been building, they have had no reported accidents or incidents, according to Communications Director Andi Plocek.

SolarReserve CEO Kevin Smith, said, “Solar power means ‘lots of jobs.’” According to the Solar Energy Industry Association’s 2012 review of national solar employment, there are over 119,000 solar jobs spread across all 50 states — more workers than in U.S. steel production or coal mining and represents a 13.2 percent increase in employment over 2011.”

He likened his hiring practices to the quality of the products being used in construction. “The choice for the best is continually chosen by SolarReserve as longevity and low-maintenance are part of the reasons for using them.”

Many of the major components of the solar project come in as many as 20 pieces. Assembly is about brawn but also about knowing the technology to assemble and install them. One important unit can take several different employees with different skills over a period of time to complete. “People out here learn as they go sometimes,” Allen said.

Two women have been hired on so far for the full-time permanent staff of approximately 45 people once the plant opens, and more applications are encouraged.

Others agree business in the area has picked up due to SolarReserve. One restaurant worker said, “Now, we’re busy all day. We used to just be open in the evenings for dinner.” A local minister said that there are more people moving into the area and that prior to SolarReserve, the opposite was true.

The experience at SolarReserve according to one local employee, “is a once in a lifetime experience, not to be missed.” SolarReserve, it would seem is bringing a bright new look to an old mining town.