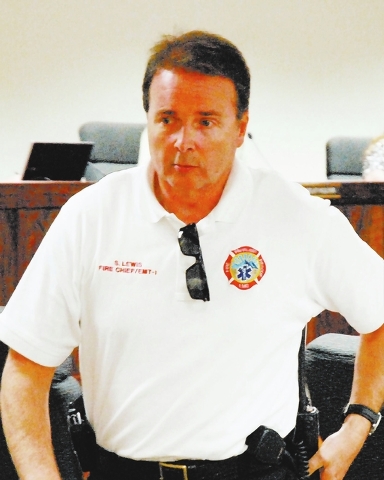 Pahrump Valley Fire Rescue Services and the Nye County Sheriff’s Office were called to respond to a structure fire last week that claimed the back portion of a residential property on Our Road.

A report came in to emergency dispatch around 10:50 p.m. Thursday evening of an unknown type fire in the area of Our Road that could reportedly be seen from Irene Street.

As fire crews were en route to the call, they were informed by dispatch that the fire was reportedly coming from a shed on a property in the 3100 block of the street, near Barney Street, which was eventually found to have spread to the back portion of the primary dwelling at the address.

“It originally came in as a report of an unknown type fire. Shortly thereafter dispatch informed us it was a shed fire or an outbuilding fire in close proximity to the residence. Right as we were arriving, we were informed (the fire) had extended to the primary dwelling with explosions coming from the original building of origin,” PVFRS Fire Chief Scott Lewis said Friday.

“Upon our arrival our crews did a quick knock-down of all the fire at the rear of the property. They had a number of personal property vehicles, things like that and at least one if not more outbuildings back there that caught fire,” he said.

Once firefighters were able to stop the spread of the flames coming from the backyard, Lewis said crews moved to the interior of the home where they were able to hold the fire to a single room and the attic space before completely extinguishing the flames.

“Once they got that large volume knocked down, then they moved to the interior and halted the forward progress in the structure, basically held it to a room and contents, but there was some fire up in the attic space, which meant they had to pull some ceilings back,” Lewis explained.

There were no injuries to report from the blaze and Lewis said firefighters on scene were able to successfully rescue a single pet rabbit contained in a pet carrier from inside the home as well.

Lewis said the rabbit was left in the care of a sheriff’s deputy on scene when PVFRS left the area Thursday evening.

The family reportedly residing at the residence was not home at the time of the fire Lewis said. Police and fire officials, however, were looking to find them and speak with them following the blaze for any possible additional insight into the cause of the fire.

When NCSO deputies arrived on scene they reportedly informed police dispatch that the front door to the primary residence at the address was open. Neighbors also reportedly told investigating officers a minivan had been seen leaving the property shortly before the fire was reported to PVFRS.

“The occupants are unaccounted for at this point, they weren’t there, but we are looking for them to determine what exactly happened,” the fire chief said Friday.

As of Tuesday afternoon, Lewis said to his knowledge the family had not yet been located by the sheriff’s office for questioning. The cause of the fire remains under investigation at this point in time as fire officials continue to look into the possible causes of Thursday night’s fire.