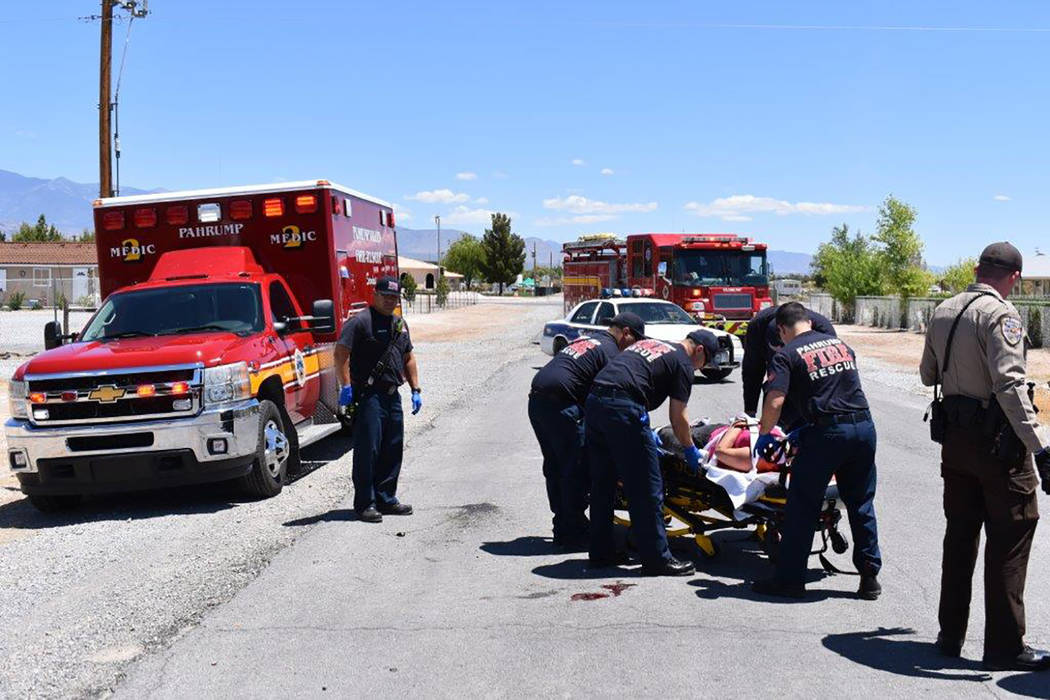 Special to the Pahrump Valley Times The rider of a quad was transported via Mercy Air to UMC Trauma after crashing the vehicle along the 1900 block of East Heritage Street on Tuesday May 15, at approximately 12:30 p.m. The Nye County Sheriff’s Office is investigating the circumstances of that accident. 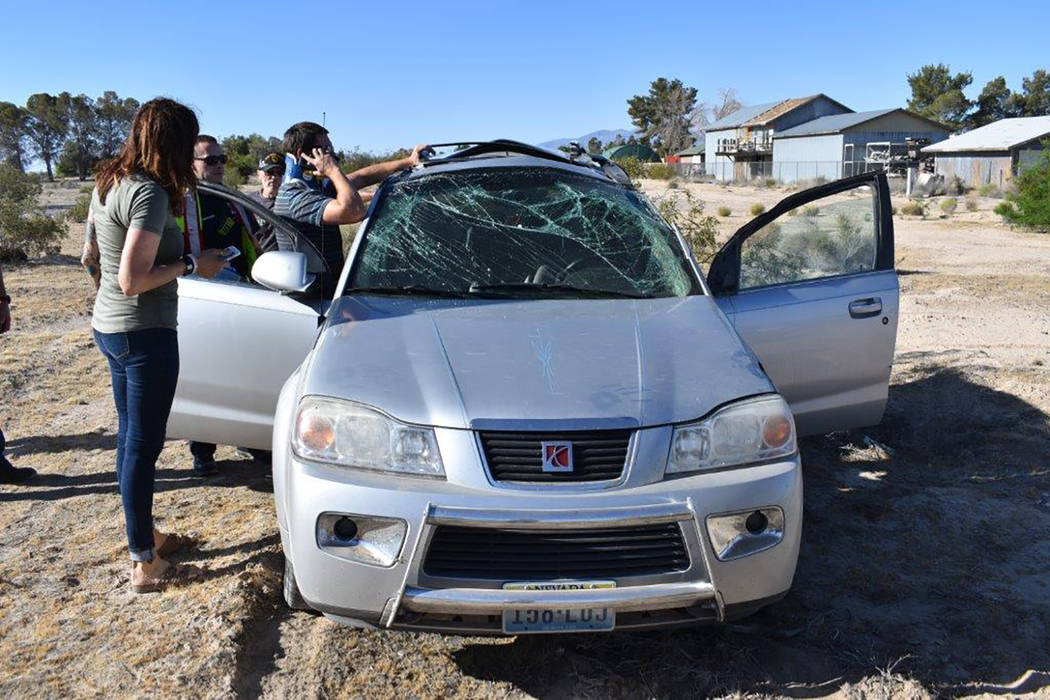 Special to the Pahrump Valley Times Pahrump fire crews responded to a single-vehicle rollover crash at the intersection of Basin Avenue and Stanley Street on Saturday May 12, just before 4 p.m. One person was transported to Desert View Hospital with non-life threatening injuries.

One person was transported to UMC Trauma in Las Vegas with serious head injuries in an off-road vehicle crash.

“The accident involved a quad and its rider,” Lewis said. “Upon arrival, crews found the rider of that vehicle lying in the roadway with significant head injuries. That patient was transported to Mercy Air Base 21 for flight to trauma. The Nye County Sheriff’s Office is investigating the circumstances of that accident.”

The following afternoon, emergency crews responded to a report of a motor vehicle collision with injuries at the intersection of Mesquite Avenue and Blagg Road.

“Upon arrival, crews found the two-vehicle accident as reported with one vehicle overturned, and a wide separation distance between both vehicles,” Lewis said. “We completed the scene size-up and risk assessment and found that while there was no entrapment, there was one patient who required transport to the local hospital.”

One transported after rollover crash

On Saturday, May 12, fire crews were dispatched for a report of a vehicle crash at the intersection of Basin Avenue and Stanley Street, just before 4 p.m.

“Upon arrival, crews found a one-vehicle rollover accident with the vehicle resting on its side and well off the roadway,” Lewis said. “The patient was found to have self-extricated, and crews transported that patient to the local hospital.”

On Tuesday, May 8, fire crews responded to a reported two-vehicle crash at the intersection of Basin Avenue and Blagg Road at 4:45 p.m.

“Upon arrival, crews found a two-vehicle, rear-end type collision,” Lewis said. “While there was no entrapment, one patient was transported to the local hospital.”

On Saturday, May 12, crews were dispatched to the 1400 block of West Blosser Ranch Road at approximately 9:13 a.m.

“Upon arrival, crews found an approximate one and a quarter acre slow-moving grounds cover fire, which was quickly controlled with no extension to any of the nearby structures,” Lewis said. “It was determined that an unauthorized controlled burn is what ignited that brush fire.”

On Tuesday, May 15, local crews responded to a reported brush fire in a mountainous area between Highway 372 and Bannavitch Street, just before 9:30 a.m.

“Crews arrived to find a visible fire on top of the mountain,” Lewis noted. “That fire was extinguished without incident and there were no exposure structures nearby. No injuries were reported and the cause of that fire is suspect in nature.”

Local residents who plan on getting rid of nuisance weeds on their property, by way of incineration, have just a few days to do so, as the annual burn ban goes back into effect, said Jennifer Fanning, executive assistant for Pahrump Valley Fire and Rescue Services.

“This Sunday, May 20, will be the last day for local residents to burn vegetation,” Fanning said. “The burn ban will go into effect starting Monday and will last until sometime in the fall. Usually, it’s about the end of October.”

Fanning also said there are potential penalties for those who do not adhere to the burn ban.

“The first time is usually a warning, but after that, your permit can be revoked and the issue could possibly turn into a misdemeanor, depending on the scale of the burn and what the individual is burning,” she said. “Residents also need to get a permit from the fire station here at 300 North Highway 160.”

Additionally, Fanning said residents must be the actual owner of the property where the burn will take place.

“They also have to have insurance on that property,” she said. “One permit is good for any property that you own as long as you have insurance on it. Once you get your permit, and as long as burn season is open, and it’s not windy out, all you have to do is call the phone number listed on the permit, where you leave your information on the answering machine. Once you do that, you’re good to burn.”

Fanning also noted that only waste vegetation can be burned.

“You are not allowed to burn any type of household trash, including papers, cardboard or any type of construction waste material, such as pallets or lumber,” she said. “You also must be at least 25 feet away from any structures, and have a water hose and shovel nearby.”