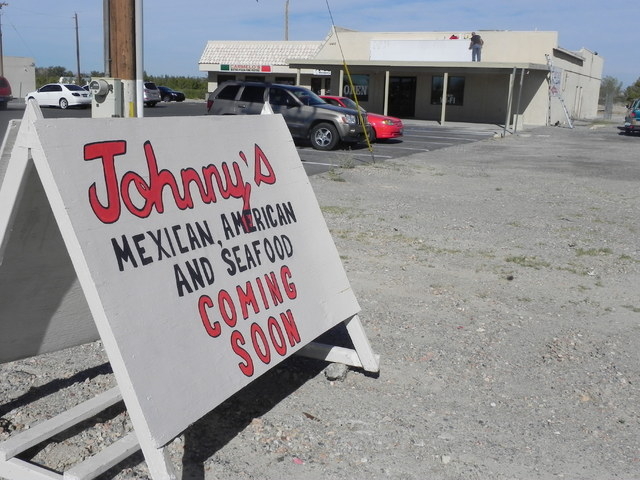 A new restaurant went together very quietly over the past two weeks.

Johnny’s American Mexican Seafood opened over the weekend in the former location of the Pahrump Diner, 1440 E. Highway 372. In fact, the restaurant is under the same ownership. Juan Ramirez said he has added new items to the menu.

“We already had American food, but we’ve added Mexican plates and some seafood dishes.”

Ramirez said other than garlic shrimp, he chose to offer fish dishes like a stew made with talapia, fried and broiled fish.

He said the prices are very reasonable and range from $4.99 for breakfast to “around $7.50 depending on what they order.”

The liquor store was already an established package store.

Another new restaurant is set to open around the end of the month.

China Wok owner Jinfu “Jeff” Shao has taken on a partner and will be opening Thai Coconut Bay in the former location of China Wok on Dahlia Street.

Contractor Andrew Jordan said Tuesday morning, “The kitchen will stay the same but the dining area has been totally renovated.”

He said the new restaurant will have to go through the same inspections as if it had never been a restaurant before now. “The going is slow but we’re hoping everything will be completed by the end of November.

As the name suggests, the restaurant will serve Thai food and give a more convenient location for that style of food on this end of town.

Pahrump has My Thai, located on the far south end of Pahrump Valley Boulevard at Manse Road.

A new beauty salon will open at the far north end of Pahrump Nov. 21.

The Nevada Gaming Board has recommended approval for William Hill Sports Book to open at Lakeside Casino &RV Resort. The property is owned by Golden Gaming Group.