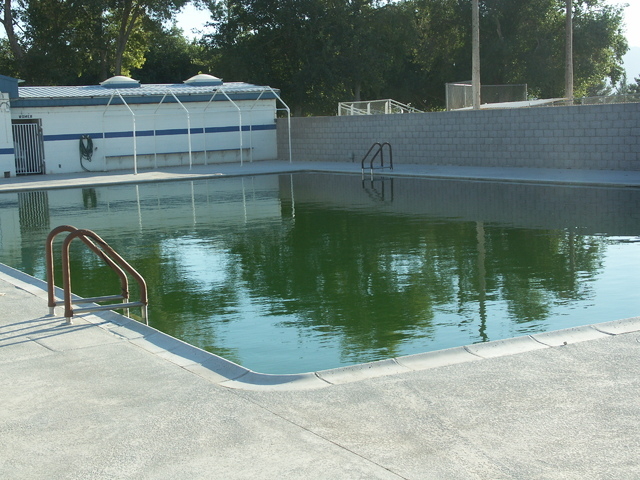 Pahrump Town Board member Amy Riches said her efforts to establish year-round swimming in the valley is not dead in the water.

Riches is continuing her effort to convert the seasonal town pool into a year-round swimming facility.

The present pool is adjacent to Petrack Park.

Local resident Rachael Roberts began making waves about the issue by spending this past year consulting with Riches, town staff and the Pahrump Parks and Recreations Advisory Board.

“Pahrump and Nye County residents are in need of a community year-round aquatics center to greatly enhance quality of life for local residents,” she said. “Unfortunately, our town pool’s current state renders it incapable for year – round usage.”

Though Roberts was referring to the pool’s non-existent enclosure, Pahrump Town Manager Susan Holecheck noted that long overdue repairs must first be made before any talk of year-round swimming begins.

She also said Riches’ effort should be applauded.

“I always love people who are passionate about something, but the reality is we can’t get grants,” she lamented. “The whole thing could probably work if we could get the grants.”

Additionally, Holecheck said she agrees that the community would benefit if a year-round aquatic center was a reality. “I would love to see an indoor swimming facility, but now is not the right time for lots of different reasons.”

On Wednesday Riches said she’s spoken to many residents who strongly support the idea.

“The people really want it and I figure I might as well try to give the people what they want,” Riches said. “I’m going to raise the money and do it myself if they let me build it there.”

Riches also said she wants the facility to be a not-for-profit community aquatic center. “I don’t want it to be something that makes money. I only want it to be self-supporting, because it’s kind of a gift to the community,” she said.

As far as raising money for the pool, Riches is now forming a committee to look at the logistics of the proposal as well as funding mechanisms.

“I do have a committee for this and we are going to go from there to see if we can make this dream happen. I don’t want the town or the county to own it. The reason I want to build it near the park is because it’s already zoned.”

The sheer expense of year-round swimming, according to Holecheck, is the main reason she feels the proposal is unsound at present.

When Roberts first presented the idea she told the board there were a few “must have” features for achieving her goal. Heating the pool was chief among them.

Her proposal featured a removable blanket keeping the pool both clean and warm during winter months as well as a heat pump.

Holecheck, meanwhile, said the town simply does not have the financial resources to carry such a burden.

“This was discussed prior to the budget sessions and it was agreed not to go forward as a capital improvement. This is a mid-budget cycle expenditure, which is never a wise move. We have already budgeted $40,000 to re-seal it because it’s 12 years old.”

Holecheck also said more work should be done to learn exactly how much support there is for the proposal.

“We really need to look at how much it would really get used throughout the year. Our youth are in school, so they are not going to be using it during the day like they do in the summertime,” she cautioned. “I really see this happening if there were a partnership established.”

The town manager spoke about what she called rumors suggesting the town is needlessly spending money before the county takes over its fiduciary responsibilities.

A claim that she and board members flatly deny. “That’s just not true,” she said.

Riches, meanwhile, said she encourages anyone who wants to join her pool committee, to call her directly at 764-0751, or email at ariches@pahrumpnv.org.