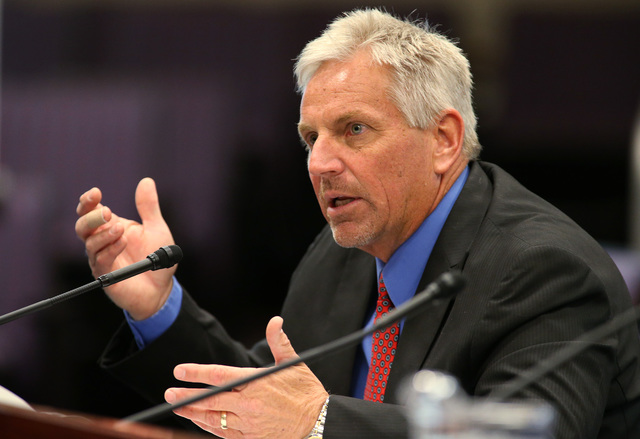 Special to the Pahrump Valley Times file Nevada State Engineer Jason King as shown in a 2015 photo. King issued Order #1293 in December 2017 at the request of the Nye County Water District Governing Board.

Several Pahrump property owners are up in arms and expressing fury over the fact that the Nevada Division of Water Resources provided them with false information which, if it had gone undiscovered, could have resulted in thousands of dollars in unneeded expenditures.

Due to the recent issuance of Nevada State Engineer Order #1293, property owners, sellers and potential buyers in the Pahrump Valley have been scrambling to discover whether or not they will be able to drill a domestic well on as yet undeveloped lots.

Order #1293 requires any new domestic well to have two acre-feet of water rights relinquished in favor of the well. For some undeveloped properties, water rights had already been relinquished or dedicated in the past, which would exempt them from the order.

However, property owners must turn to the Nevada Division of Water Resources for a records request to determine if this is the case for them. DWR is the entity that, alongside the Nevada State Engineer’s Office, monitors and manages water resources in the state.

In order to learn whether their lots have associated water rights or whether they will have to purchase two acre-feet of water, something that has been reported to come at a cost of up to $20,000, landowners have been directed to contact DWR Water Use Specialist Levi Kryder.

In multiple cases, however, the DWR has falsely reported to owners that there were no water rights associated with their lots when in fact those lots did have water rights.

Upon pressing by real estate broker and well driller Debra Strickland on behalf of one of her clients, Kryder admitted that he had made mistakes, leaving Strickland to question how many others have been affected by the misinformation.

Local developer Michael Lach said he was one who had experienced the same situation, requesting information on over 30 lots he owns. He had been told certain lots did not have water rights when in reality they did. He said he learned of this not through Kryder but only because he had been discussing the problem with Strickland.

In an over-the-phone interview conducted Feb. 13, Lach asserted, “For them to not even have the ability to understand what it was going to take to do this, that is so unprofessional. And you look at the response, ‘We’re sorry that it was an inconvenience.’” Lach demanded to know how many mistakes were considered acceptable by DWR.

“They are doing it backwards,” Strickland said. “They should have known where water had been allocated prior to issuing the order. Period.”

When reached for comment on the situation, Nevada State Engineer Jason King stated that DWR has received and processed 375 requests for information since Order #1293 was issued. Of that total, eight inquiries resulted in false information. “All eight of those have been subsequently corrected,” King said.

On the subject of the cause of these inaccuracies, King explained, “Water law, water rights and the relinquishment of water right are very complicated matters covering a length of time that can pre-date statehood.”

A request for comment was sent out to numerous county officials and representatives of the people of Pahrump, including all five Nye County commissioners, Nevada Assemblyman James Oscarson and Nye County Water District Governing Board General Manager Oz Wichman.

“I am outraged about DWR and Order #1293. It is all about big money trying to control the well owners,” commissioner Butch Borasky stated in response. “As a Nye County commissioner, it is very disheartening to think any of my colleagues would support this action.”

Oscarson apparently agreed, replying, “I believe the state water engineer has overreached his authority with order 1293… Until all the records being used are verified and deemed 100 percent accurate with a guarantee by Mr. Jason King, he should immediately suspend his order.” Oscarson said he was in contact with his fellow legislators, discussing his concerns.

Commission chairman John Koenig, who is also a liaison to the Nye County Water District Governing Board, which requested the issuance of Order #1293, said he was aware of the situation.

“It is unfortunate that this happened,” Koenig stated but he remarked that it was his understanding that the issue had been cleared up and correct information was now being disseminated. He also noted that he found it concerning that certain individuals who own water rights were advertising that water rights must be purchased in order to drill a well, instead of stating water rights may possibly need to be purchased.

Commissioner Dan Schinhofen deferred comment to Koenig. Commissioner Lorinda Wichman declined to comment due to her husband’s position as water district general manager and no response was received by commissioner Donna Cox.

As for water district manager Oz Wichman, he reiterated his previous statements.

“The records are what the records are,” he said. He stated that the process of sorting through nearly 100 years of records in order to nail down all lots with water rights associated would take time but that DWR was working quite hard to do so, with four or five staff members laboring toward that end.

“DWR has and always will continue to update and maintain the most accurate data relevant to water rights as possible, understanding that there are limitations to what can be found in our files,” King responded when asked how DWR planned to ensure these inaccuracies did not reoccur. “If deeds and other pertinent legal documents aren’t filed with our office, we won’t know about them.”

King also stated that the general public could perform its own independent review of land and water right ownership if they are concerned with the state’s information.