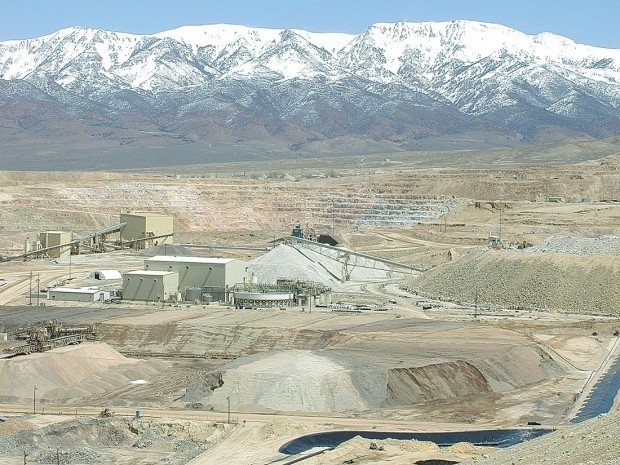 A fire at the mill at Round Mountain Gold Oct. 1 will shut down the mill operations for a few months, but that doesn’t mean there won’t be any gold production.

Randy Burggraff, Round Mountain Gold vice-president and general manager, said 75 percent of the gold comes from the heap leach pad, the oxide ore, the remaining 25 percent is the sulfide ore going through the mill.

Burggraff said the source of the fire is still under investigation. Workers were doing routine maintenance at the time and nobody was hurt, he said.

“It was very hot, but a very local fire, so the damage was fairly significant but fairly localized,” Burggraff said. “There’s only five to six people there on a continuing basis but there was a lot of maintenance work going on. I have no idea how many were in there at the time.”

“Everybody was evacuated from the building,” Sweeney said. He said the mill sustained damage but it’s not a total loss. Burggraff said a majority of the Round Mountain VFD force are mine employees.

“We will continue to run the mine at the normal rate, the only difference is we stockpile the mill ore that we encounter and when the mill comes back up, early in 2015, we’ll be ready to go,” Burggraff said.

“We’ll make up a little bit of that by increased attention to our leaching operation and the rest will be delayed that amount of time,” Burggraff said.

Round Mountain Gold didn’t lose any gold during the fire, just equipment, he said, adding the fire was probably due to the maintenance work going on. Crews were doing routine, monthly welding.

Sweeney and Burggraff both applauded the work of the Round Mountain firefighters. Sweeney said they did a phenomenal job putting out the fire and probably saved the mine millions of dollars.

“We really don’t have a cost estimate yet but without their efforts we could’ve lost the entire mill building and that would’ve been $20 to $30 million. It’s not anywhere near that,” Burggraff said.

On the bright side, he said the fire won’t result in any loss of gold and will extend the expected mine life.

“For the mill it’s probably six years from now, five years from now. So the loss hits us in 2014 but it’s recouped down the road,” Burggraff said.

Round Mountain Gold is working on expanding to a second open pit, but Burggraff said that project will require an increase in gold prices. The mine also did some underground exploration.

There won’t be any layoff of employees because of the fire, the manager said.

“The guys will all be utilized to get the thing back in running order. In fact we’re still hiring. We’ve got as of this morning, we had 35 openings all over the place,” Burggraff said.

The Mine Safety and Health Administration (MSHA) is investigating the fire.