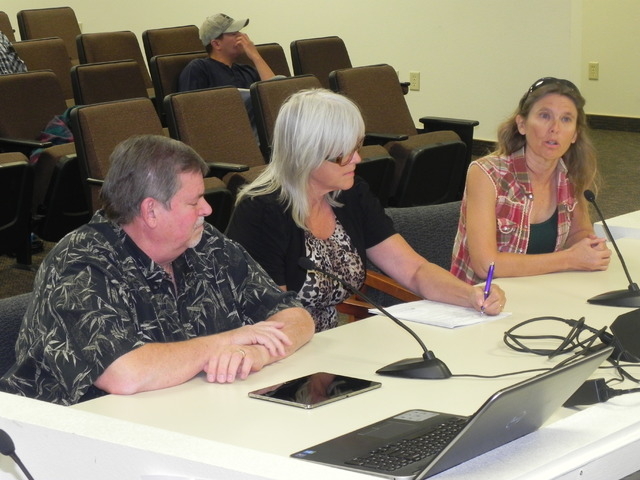 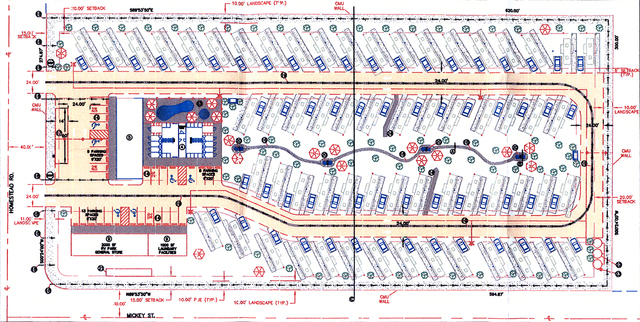 Morales also won approval by a split 5-2 vote, for rezoning an entire 55-acre parcel to general commercial at 600 S. Leslie St. where plans for a 213-slip RV park by American Eagle RV and Resorts LLC were rejected by the RPC Aug. 13. Nye County Principal Planner Steve Osborne said Morales already resubmitted plans for the same RV park with a three-acre, artificial lake which was originally planned on 32 acres of the 55 acres, but this time the plans include other uses for the remainder of the 55 acres including a nursing home, Alzheimer’s facility, retail shops and medical/professional building.

The master plan amendment to mixed use and the zone change to neighborhood commercial were approved for the 61-slip RV park on Mickey Street, along with a conditional use permit allowing an RV park in the neighborhood commercial district. But Millennium Investment LLC won’t be allowed to have a decorative water feature due to water concerns, or a convenience store, which is only allowed in RV parks 10 acres or larger.

Planner Beth Lee said Homestead Road is already a mix of business and residential zoning, so changing the zoning would be consistent with future development.

“The water feature has been reduced to less than 250 square feet in surface area which no longer requires a conditional use permit. However staff feels they can’t support this water feature because there is currently an over-allocation of water rights in this area,” Lee said.

A text amendment to allow RV parks as small as five acres to have a convenience store, requested by Dr. Jeffrey Gunther for a project on Bell Vista Ave., was passed by the RPC but wasn’t approved by county commissioners last year. This RV park would be on 4.2 acres..

“We have purchased water rights for this site. It will take less than eight acre feet of water for the entire project. If we would irrigate this project it would take 25 acre feet of water,” Consultant Dave Richards said, from CivilWise Services. “An RV park is one of the minimal uses of water that you could put on a project like this.”

He said they plan to use gray watere for irrigating the landscaping.

Zolina Burson, who manages her family’s Burson Ranch nearby, complained about the impact on the water supply. Burson said she already had to cut back on her alfalfa farm from 130 acres to 60 acres and drill a second well due to the declining water table.

When it came to water quality, she said, “I am concerned about the 61 toilets.”

RPC Chairman John Koenig was opposed to even a small water feature.

“If you’re willing to make the water feature go away then I don’t have a problem,” he said.

“My question is it worth jeopardizing the attraction to this site to satisfy the less than half an acre foot of water?” Richards asked.

RPC member Joe Goode Sr. objected to the restrictions, he said if the plans were approved without the water feature and store, it cuts out the reason for people to go there.

The planning department report noted there’s six RV parks already approved in Pahrump with a potential of 436 RV spaces for development. Richards said construction could start in six to eight months, it will take a couple months to complete design work, public works will then have four months to review the site development plans, the Nevada Division of Safe Drinking Water and the Nevada Division of Environmental Protection will have to grant approval.

The 55-acre site at 600 S. Leslie St. was remanded back to the RPC by county commissioners Sept. 16 to allow the planning commission to review an impact study that wasn’t included in their material. Osborne said there were still issues with the application.

“We still don’t believe that the proposed master plan amendment promotes orderly physical growth. There will still be an issue with public water and sewer facilities not on the site. The applicant is not proposing to connect to a public water and sewer utility. We don’t believe that the applicant has proven that the proposed uses are compatible with the surrounding low density surrounding residential area,”he said.

Richards said originally a casino was also proposed on the 55 acres but it was removed from the development plans after developers felt it would get a lot of objections. The property had been rezoned general commercial in 2007 but that designation expired after three years when it wasn’t developed.

The traffic impact report estimates the development would generate between 1,150 and 1,500 vehicle trips per day, but county planners said those figures were extremely underestimated. County Commissioner Frank Carbone said the average daily traffic estimate will have to be changed.

Paul Strange, from CivilWise Services, said the project is being built along Leslie Street, a designated truck route, developers will also extend Wilson Road through the property. There will be walls and berms separating it from residential areas. He said American Eagle RV and Resorts LLC has 125 acre feet of water rights, they plan on constructing a sewage treatment plant. The property is currently split into rural estates and general commercial zones, Strange said, which is a detriment to the master plan.

Business owner Alex Delgado spoke in favor of the project. He said it will be a high end RV park that will bring in tax revenue.

“Some of the people I spoke to around there are just waiting for something so they don’t have to look at that big dust cloud from hell,” he said.