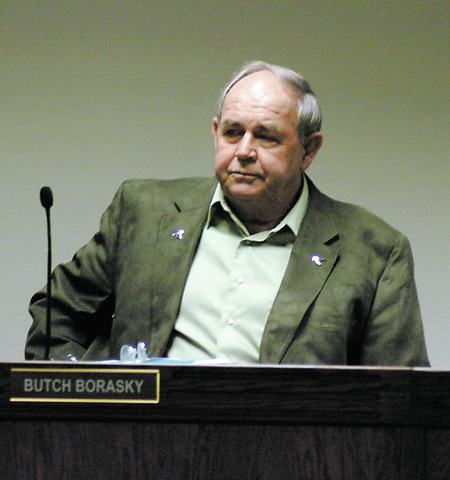 Commission Chairman Butch Borasky, who provided the pivotal vote against the increase in a 3-2 vote, has asked to schedule another public hearing and vote on the matter.

It has been scheduled for Oct. 1 in Tonopah. He previously joined Commissioners Frank Carbone and Donna Cox in rejecting the measure, which was approved by voters in the November 2006 election by a razor-slim margin of 5,806 to 5,788, followed by authorization from the Nevada Legislature in 2007, only to be defeated by a 3-2 vote of the county commission in December 2007.

Half of the revenue would go toward police services — hiring more personnel, buying more equipment or building facilities — half would go to fire departments within the county.

“Originally, I fully intended on voting yes on it. For some reason when it came up, I voted no and I really surprised myself,” Borasky told the Pahrump Valley Times.

Borasky said he wanted more documentation at the last meeting exactly how the money would be spent.

The wording on the use of the tax proceeds mirrors the 2006 ballot question: to recruit, employ and equip additional firefighters, deputy sheriffs and other public safety personnel; to improve and equip existing public safety facilities and construct new facilities. The tax increase, if passed, would be allocated on a pro rata basis by population to Pahrump, Amargosa Valley, Beatty, Tonopah, Round Mountain, Manhattan, Gabbs and in the remaining unincorporated parts of the county, providing half goes to sheriff’s department services and half to local fire departments.

“I fully intended and I’ve said way back when it (the agenda item) was put on, I would support that, it was the will of the people. For some reason my brain said one thing and my voice said another. Call it whatever you want, I’m not making excuses,” Borasky said.

He said public safety and the lack of firefighters and sheriff’s deputies in Nye County compared to 2006 mandates action.

“I just think it might not have been clear enough for one or more commissioners. I think now it will be a little more clear,” Borasky said of the previous vote.

The sales tax increase had to be reintroduced as a new bill, he said.

“Some people may not like it, but a lot of people didn’t like it in the last vote. No matter the way you go, there are going to be a group of people dissatisfied with it.”

Sheriff Tony DeMeo was pleased at the reconsideration after the Tuesday vote. He said the sheriff’s department has lost 25 positions in the few years since the ballot question. The additional tax would mean paying $50 more for every $10,000 in transactions in Nye County, but the sheriff said tourists will also contribute, instead of a property tax that only penalizes locals. DeMeo estimated it will mean $1.2 million to $1.3 million in additional revenue annually for the sheriff’s department.

When the sales tax increase was voted down by commissioners 3-2 in December 2007 — after Commissioner Peter Liakopoulos cast the swing vote against when his wife didn’t receive a town position in a quid pro quo deal for which he was later convicted of bribery — DeMeo said the sheriff’s department was still able to hire people because the county was in a better financial position.

But DeMeo added, “Now because times are lean, now is the more appropriate time. I wish they’d passed it a long time ago.”

“The recession lasted a lot longer than a lot of people thought it would last. That’s pretty much what happened to Nye County but counties across the nation are also feeling the impact,” he said.

On the street, DeMeo said more positions means a more proactive force against crime. He credited a task force with a 40 percent drop in crime in 2011, which had to be eliminated due to budget cuts.

“What we’re trying to do is maintain a police presence so we don’t have a crime rate,” DeMeo said.

Borasky wanted to hold the public hearing and vote at a Pahrump meeting. DeMeo said the discussion has to wait at least 30 days, waiting until the Oct. 15 Pahrump meeting would take too much time.

The Nevada Department of Taxation said it would be 120 days if the increase was approved, for funds to begin trickling down.