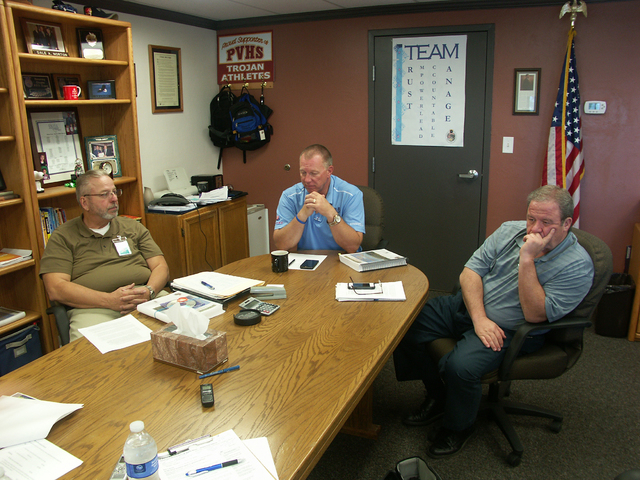 Virtually every campus throughout the 18,182 square mile county is in desperate need of many interior and exterior repairs, with little money to cover the overall costs.

A “yes” vote would permit the district, with the approval of the Nye County Debt Management Commission, to continue issuing the bonds between the date of authorization and Nov. 4, 2024.

A “no” vote, consequently, would prevent the district from issuing the bonds, which would result in the elimination or reduction in the district’s property tax levy for school bonds.

District Superintendent Dale Norton said community support is needed for a funding mechanism that would help begin to address many of the district’s woes.

“If the bonds are not approved, the district will not have the resources to improve, renovate, repair and equip our schools,” Norton said. “If this funding is delayed, school buildings will continue to deteriorate the disparity in the learning environment.”

Norton said the plan would not raise county property taxes, but extend the current general obligation school bonds which are currently funded at 58.5 cents per $100 of assessed value.

“This is not an additional tax that will be put on anybody’s tax bill,” Norton said. “It is currently active right now, in order for the school district to continue to move forward with repairs and the equipping of schools not just in Pahrump but across the entire district.”

District officials recently hired an architect to inspect each campus and the district office.

“That school is over 50 years old,” Ritchie said. “Since there is no money at this time, the capital projects fund would be used on anything needed north of Pahrump. In the Pahrump area, capital projects and residential tax money will be used. Those expenditures will be made on a priority basis only.”

“I am really concerned about those who suggest that we just ‘do it as we need it,’” he said. “We already know how old the buildings are in the north and we need to address those issues now.”

Norton, meanwhile, said he too would prefer to remedy some past due projects in the northern attendance area as soon as possible.

The scope of the district’s projects vary from painting and wall repairs, to the installation of HVAC units and high-tech classroom video and audio systems. Crack repairs and the resurfacing of many of the school district’s parking lots are also part of the proposed project.