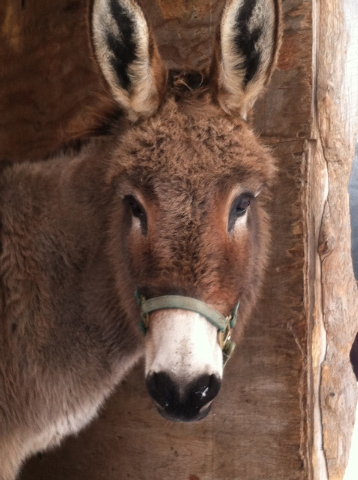 Traffic-stopping wild burros wandering the Pahrump Valley and corralled by the Bureau of Land Management in December, have found new homes.

The 12 burros, identified by BLM officials as members of the Johnnie managed herd, were offered up for and successfully adopted last weekend.

Kirsten Cannon, public affairs specialist for the BLM said she was pleased by the results of the adoption event, the second BLM has hosted in the area in the past five years. Seven animals were adopted on Saturday and the remaining burros had new homes by Monday, she said.

The money raised through adoption fees has been funneled back into the wild horse and burro management program, she said.

Though 12 burros were removed from the Johnnie herd management area, it is still overrun and over-populated with burros. Cannon said that between 153 and 235 burros remain in the managed area. The land mass, she said, can only adequately support between 54 and 108 burros.

Cannon said that although the the management area remains strained by the excess numbers, additional de-population plans are not scheduled. However, she added, the corral panels remain in place to allow the roaming burros to self-pen. BLM is hoping to capture an additional 17 – 27 animals from the area in that manner, Cannon said.

BLM conducted the gather, Cannon said, because the burros have lost their wild characteristics and in doing so had become both a nuisance and a public safety hazard.