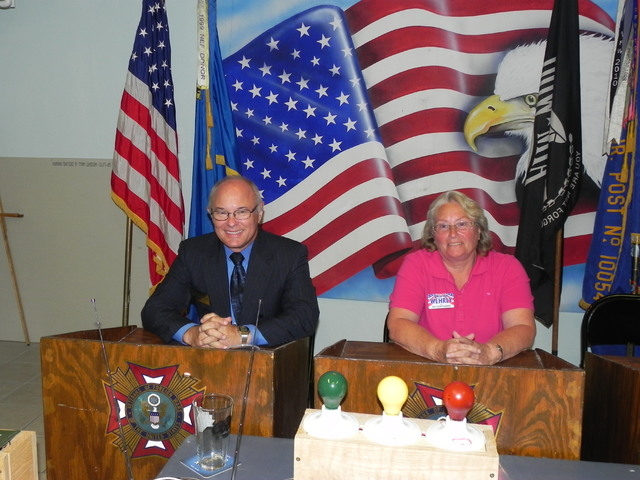 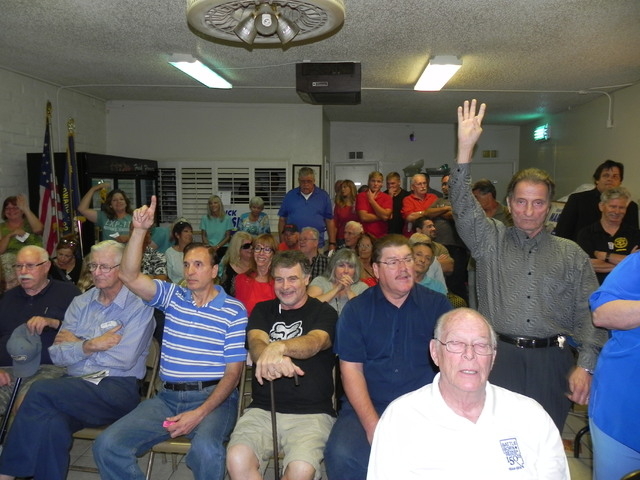 Nye County Sheriff’s candidates Sharon Wehrly and Rick Marshall got to air out their first debate at Veterans of Foreign Wars Post No. 10054 Thursday night and it wasn’t a civil debate as the campaigns had hoped for, but a raucous affair, with some questions shouted by supporters for different campaigns.

Brian Shoemake questioned Wehrly about her claims she had 38 years law enforcement experience, including her work as a Wackenhut security guard at the Nevada National Security Site, formerly the Nevada Test Site.

“Wackenhut Services Inc. also was a private investigator firm,” Wehrly said. “Wackenhut Services Inc. was also sworn by the Nye County sheriff’s department the entire time I was there so I didn’t have to be a reserve officer and still be sworn. I was sworn under the Atomic Energy Act of 1954 which gives limited arrest authority. It gives arrest authority for things like kidnapping, sabotage, espionage.”

Wehrly said she arrested people outside the test site, including during the peace protests.

Marshall said he has been a full-time peace officer for 32 years, working in patrol, detention, investigations, mid-management and the executive level.

Wehrly said she has been a sworn peace officer since 1975.

“I don’t have the background that Rick does but I don’t think you need the background Rick Marshall has to lead people, to make this a good department,” she said. “I have been a security officer for the Department of Energy, I was a security officer for 25 years, during that 25 years I worked as a sergeant of operations. I did operations plans and a myriad of other things. I was also a plans analyst, a training analyst, I built a training program for the Department of Energy that was published in the National Register,” she said.

Rita Prince asked Marshall how he could be sheriff when 74 percent of the deputies in the police union, endorsed Wehrly. Marshall claimed she was playing tricks with the numbers.

“If you have 10 people vote and seven of them do it, you get your 70 percent,” Marshall said. “Supervising personnel is very simple but as a sheriff I don’t supervise those deputies, I supervise the entire agency. We have intermediate levels of supervision that act in between.”

Wehrly countered a letter she got from the Nye County Law Enforcement Association included endorsements by 74 percent of over 100 employees in the department.

Wehrly was questioned about her suggestion in her first 100-day plan and plans to get the department accrediation. She said it could be a pay-as-you-go program where auditors look at the department.

“We have to start at the very bottom and work up with the sheriff’s office anyway because we have a lot of messes,” she said. “We might as well be accredited as we go along.”

Marshall said accreditation will be expensive.

“You have the up-front cost just to apply, that’s about $10,000, then the auditors come out you have to pay for their salaries, their travel and per diem, everything that deals with it,” he said. “Then once they issue the audit report you have to pay for anything that they want done to your agency. It all comes out of your funds. Then they come back out and they do a secondary audit,” he said. “It’s going to run in the hundreds of thousands of dollars.”

Wehrly replied the first audit will be a baseline to find out exactly where the sheriff’s department stands.

“As time goes on we don’t have to pay for everything up front” she said. “As time goes along our tax base is going to change, we have a half-percent (sales) tax that can be used for a portion of that.”

When asked how to trim the costs of the new jail, Wehrly suggested getting rid of the $500,000 it costs to feed the inmates per year and put part of it into hiring medical help. Marshall said the annual jail food budget isn’t that high, adding they cut back inmates to two meals per day. Marshall said they’ve also reduced the cost of prescription drugs.

Both candidates said they favored a citizens’ review board. Marshall told resident Louis De Canio he invited citizens to sit in on the major use of force board and shooting review board.

“We are going to have a citizens’ advisory board in the communities just like we used to do a long time ago,” Marshall said. “We’re going to meet with them on a regular basis, we’re going to get their input on what’s right, what’s wrong, what needs to be done and that’s going to be open to the public to take comments.”

Wehrly said that citizen review board was a suggestion of her first 100-day plan, it’s the first time she’s heard Marshall advocate it.

“I put together that board because I knew that we did not have a place for citizens to go and be able to talk one-on-one with the sheriff,” Wehrly said. “I thought that was very, very important to find out what’s going on in each one of the communities.”

Marshall replied, “if my opponent had attended the debates and the meet and greets she would’ve heard me say that.”

When asked about grants, Marshall said he’s written over $22 million worth of grants that have saved taxpayers money on personnel and equipment.

Wehrly cited a couple of examples of grants that encountered problems.

She also discussed a grant for placing computers in patrol cars that has not reaped the benefits first thought.

“I thought it was an absolutely exceptional idea except,” Wehrly said. “We didn’t have enough money to reprogram them or keep them running. In other words, we couldn’t pay I.T. to keep them going and I don’t know where they are.”

“I think he’ll be a very good pick for us because he understands the small community and their thought processes, the things that they need and he’ll be able to help with resources in figuring out where we can move things around to manage the budget, stay within the budget and yet provide all of the services for the people of Nye County,” she said.

Marshall said if Moody is a certified peace officer in Alaska, the Nevada Peace Officer Standards and Training agency will do an analysis to see if he meets reciprocity in Nevada. If so, Moody will have to do the physical fitness test and an 80-hour course. If not, he will have to go through the sheriffs’ academy which can take four to six months, he said.

While Marshall touted his AQ rating from the National Rifle Association, Wehrly said she had an A minus rating, only because she had let her membership lapse.

“One of the reasons I’m endorsed by the Nevada Firearms Coalition and that I have an AQ rating from the NRA is I don’t listen to what the feds tell me. I believe in the Second Amendment. I believe in your right to absolutely own firearms to protect yourself and your family and that starts with the sheriff being willing to stand up to the feds,” Marshall said. “A question was posed to my opponent, what would you do if the feds came in, her answer was there’s nothing I can do about it. There are things the sheriff can do about it. The sheriff is the chief law enforcement officer in this county and federal intervention stops with the sheriff.”

Wehrly said her A minus rating means she’s a preferred gun proponent and has actually fought for the Second Amendment through legislation.

“I have, I will and I believe in the Second Amendment rights with all my heart… as a gun owner since I was 21 years old,” she said. “I’ve been a firearms instructor for the NRA, for the Department of Energy and for the Nye County Sheriff’s Office.”

When asked about the sheriff’s reserve program, Wehrly said at one time there were 25 reserves but it has whittled down to almost nothing. She plans to revitalize the program to save taxpayers money.

Marshal said there’s a reserve deputy in Tonopah, one in Beatty and six in Pahrump who serve in everything from detention to detective work to patrol.

“I haven’t seen any change yet,” Wehrly said.