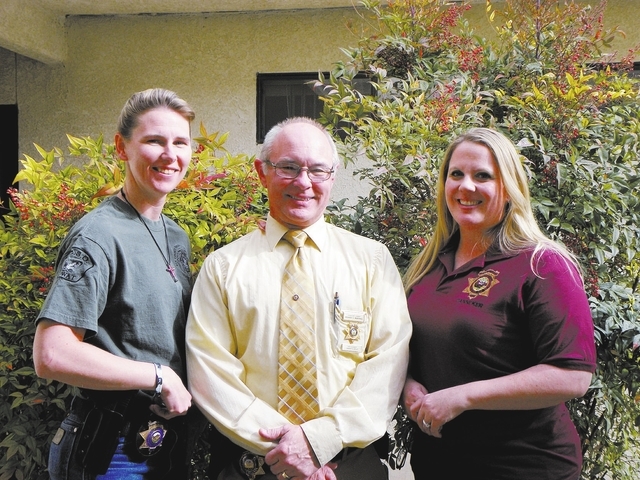 It was all Nye County Sheriff’s Deputy Summer Danneker needed to hear while at last year’s Fall Festival.

A local woman approached and thanked Danneker and the sheriff’s office for presenting a past woman’s self-defense class. The deputy said the woman was forced to use what she learned in the class to fend off an attacker.

As a result, the sheriff’s office is bringing back the self-defense class to local women.

“The class is taught by law enforcement instructors that are certified defensive tactics instructors,” she said. “It’s taught by myself and Deputy Heather Trumble and we have two additional deputies teaching as well. We have a classroom portion on how not to be a victim. We also do a hands-on class with basic self-defense moves, strikes, kicks and target areas.

The second day, Danneker said, will involve the so-called “bad guys” who are two male deputies with the sheriff’s office.

“They suit up in what we call the “red man suit” and the women will also have some padding protection on and they go hands-on in a real life situation fight.”

The classes have been ongoing for more than 15 years.

At one time, the classes were held each month.

Danneker said during that time, budget issues and personnel changes in the office temporarily put the program on the back burner for a while.

Though the class is free of charge to any local woman, Danneker noted that participants must first register.

“We are continuing with it, but it’s not monthly,” she said. “We’re now offering it every three to four months and the classes will be bigger because we don’t offer them as often. It’s important for women to call and sign up ahead of time. We’ve seen a lot of women go through the program and come back.”

The deputy said participants should be prepared to physically “mix it up” with the bad guy instructors.

“They want to dress comfortably because there’s a lot of physical movements,” she said. “They shouldn’t be intimidated. We’ve had some participants with various disabilities in the class which is great because they learn what they can and cannot do.”

For additional information or to register, call Deputy Danneker or Deputy Trumble at 775-751-7000, or email her at sdanneker@co.nye.nv.us.