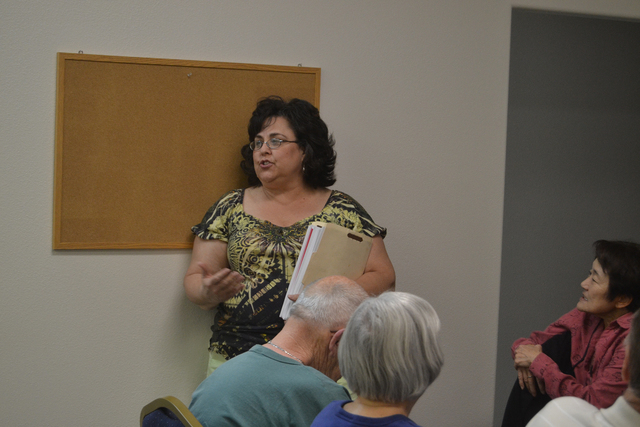 Nevada State Democratic Party Spokesman Marla Turner was in Nye County on March 19 with a rally-cry toward unity. Turner was candid with local party members about the impacts of the 2014 general election stating, “We got our clocks cleaned.”

“Here’s the deal,” she said. “We lost in November and we don’t have the numbers to overcome much of the proposed legislation.”

Turner predicted changes to organized labor, public employee retirement system (PERS) funding, prevailing wage and collective bargaining. “We already have changes in place to the Constitution that are going to affect minimum wage,” she said.

She explained current minimum wage levels that range between $5.65 and $8.25 per hour, depending on the number of employees and whether health insurance is offered. Turner said there was a movement underway to change the state constitution which would allow Nevada employers to pay below current minimums, despite federal minimum wage requirements. But, she advised, the changes are just proposed and not yet mandates.

In contrast, she said, the Democrats have proposed legislation that would raise minimum wage to $15 per hour. “But that’s going nowhere,” she said. “Because we don’t have the vote.”

She also told meeting attendees that there is a proposed “religion in school” bill, where freedom of speech based on religious conviction will be permitted. She gave an example of permissible vocalized opinions of damnation for same-gender relationships, without consequence, due to religious conviction. The religious convictions component would also translate into test taking, wherein a student could not be marked as incorrect for saying that water comes from God.

“This is the kind of stuff we are facing,” she said. That bill, she said, will likely pass.

Turner asked party members to take an activist role in joining a local grass-roots, rapid response, media drive effort to get party messaging out. She advised writing letters to the editor of local newspapers, making guest appearances on radio and television shows, testifying on bills, participating in rallies and writing to elected officials as needed.

Republicans, she said, are strong-arming the Democrats with threats of re-districting, consolidation of school districts and abolishment of county government oversight.

The biggest mistakes Democrats made in the last election, she said, was running away from the president followed by mixed messaging by candidates.

The Nye County Democratic Committee is seeking nominees for a 2015 slate of officers, to be voted on at the next meeting scheduled for April 16 at 7 p.m.