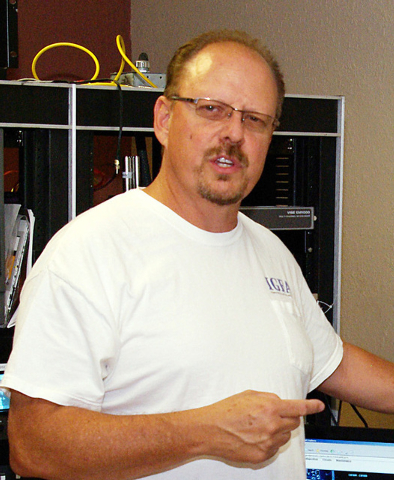 TONOPAH — People who have been frustrated trying to watch Nye County meetings live via the Internet on the Granicus system only to have the video transmission lock up from time to time can take heart.

County commissioners Tuesday approved an agreement with Wave Direct to quadruple their bandwidth to 20 megabytes. Information Technology Director Milan Dimac said it would only cost the county another $410 per month with that provider.

The county has a contract with AT&T for three high capacity T1 circuits for Internet service, but AT&T would have increased the cost from $1,270 per month to $3,770 to upgrade from 4.5 megabytes to 20 megabytes, he said.

“The original purpose was to address the problem we’re having with the Granicus speeds. They were telling us that our bandwidth was being maxed out,” Dimac said.

Commissioner Lorinda Wichman said that will also help with video conferences of other meetings, like with the Nevada Association of Counties. Granicus serves more than 600 government entities and allows viewers to take part in the meetings, not just watch.

Beginning in May 2010, viewers could begin watching county commission, regional planning commission and town board meetings live on the Internet. Videos are also archived. A contract with Granicus Inc. for video streaming costs $273 per month.

But the system is sometimes overloaded with viewers, causing a shutdown during live telecasts, like during a discussion on the half-cent sales tax increase at an August county commission meeting when the video was lost for a few hours.

County Commissioner Dan Schinhofen remarked about how sometimes viewers are kicked off the system every other sentence.

Commissioners in 2010 rejected a proposal from KPVM-TV owner Vern Van Winkle to telecast the meetings instead on a government channel. Former county commissioner Joni Eastley said that would only be picked up by Pahrump viewers.

Van Winkle said he will use three cameras that will also capture the audience reactions as well as the elected officials and people speaking at the table.