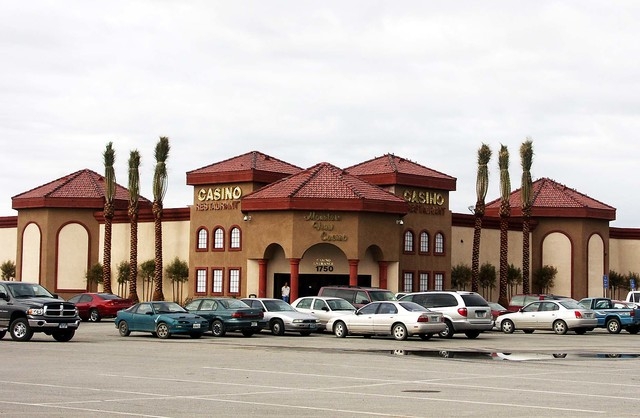 The only way the public would ever know Tim Herbst, of Herbst Pahrump Acquisitions LLC, has taken possession of the former Mountain View Casino would be reading the promotional flyers posted on the front doors.

Herbst took possession at midnight Oct. 1 and the flyers on the door are calling the property Terrible’s Pahrump Casino.

Chism, who has been with Mountain View since 2004, said the changes are coming but first all the paperwork from Mountain View has to be removed. “I’ve spent the better part of the day clearing the vaults,” Chism said, “so we can get Terrible’s set up.”

She said a lot of the older machines have been removed and that Terrible’s has plans for more changes. “They are going to replace some machines but also add to the gaming floor.”

Right now, the casino has 150 machines but will have 180 as plans for renovations gear up.

The “Terrible’s Coming Soon” sign is still in place beside the Pahrump Valley Boulevard entrance. Chism said, “I don’t know when they will get the sign up on the road but we talked today about getting a banner up to cover the sign over the front doors.

There is a lot to do when a gaming property changes hands and this will be no different. At a Nevada Gaming Commission meeting Sept. 25, the board approved a 50 percent ownership be co-owned with its current operator, Rochelle McCaw.

During the hearing Tim Herbst said they plan to renovate the interior and exterior, bring in new equipment, install player tracking, build a new restaurant and fix up the bar.

Those renovations will come slowly, but Herbst told the commission he hopes to have “a brand new Terrible’s Casino open in Pahrump by the end of the year.”

Meanwhile, Chism said there are some promotions starting. “We’re bringing back the “horse races,” she said. The game is played with stick horses and rolling the dice to determine the number of spaces a “racehorse” can move. “The first to the finish line wins $100.”

A “sack of candy” promotion begins Oct. 10. Play a specific number of points per day and win a sack of candy.

Chism said Mountain View players’ cards are being honored and accumulated points are “still on the cards.”