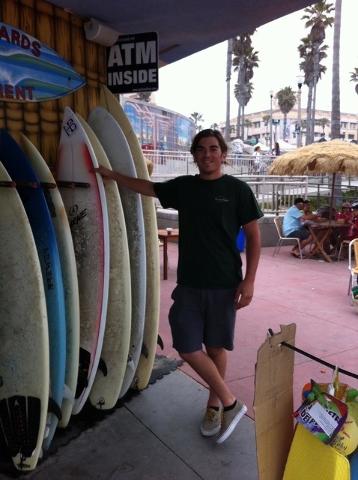 Conor Hubbell was a regular teenager until his 18th birthday when doctors diagnosed him with a mental illness that changed the course of his entire life.

Since then, Hubbell, now 22, has been battling schizophrenia and bipolar disorder. For the last four years, he has been in and out of hospitals in Las Vegas as doctors shrugged their shoulders and advised Hubbell’s parents, Susie and Erin, to move their son to another state, revealing a dire situation of mental health care in Nevada.

However, at this time, such a move wouldn’t be an option for Conor and his family, Erin Hubbell recently said. So far, the Hubbells have managed to place Conor in a six-month program at a private mental care organization in Las Vegas, where their son is undergoing treatment under 24-hour supervision.

“Like most illnesses, it affects the whole family, it affects how I deal with his mother, his siblings,” said Erin Hubbell, who drives to Las Vegas from Pahrump once a week to see his son.

According to the National Institute on Mental Health, about one percent of Americans suffer from schizophrenia. Some of the symptoms include hallucinations, delusions and thought disorders as well as problems with memory and attention.

As part of his treatment, Conor Hubbell has to stay on his meds, which he sometimes forgets to take, his father Erin Hubbell said. This can lead to breakdowns and he said he worries his son may get in trouble because of his changing behavior.

After witnessing the struggle of the Hubbell family, Andrea McGuire, who co-owns the Hubb with Erin Hubbell, decided to help out. Along with her friend, local musician Cole Reeves, she organized a fundraiser titled “Music with a Mission Benefit Show” to help the Hubbell family with medical costs.

McGuire said it’s been difficult watching Conor go through the ordeal for the past four years that she has known him.

“It’s nothing about the business, it’s about helping Conor,” she said.

The event will feature local musicians, including Jimmy D, the Reeves Brothers, Mind at Large and several other bands that will be playing for a few hours. McGuire said she also hopes to have a raffle contest and an auction. Part of the proceeds from the bar will also go to Conor, she added.

“Anything we get is greatly appreciated, so there’s no set dollar amount that we are looking for,” she said. “We are just trying to help get what we can to cover his expenses because not only do you have the medication. … This program is going to include medication, counseling, all that kind of stuff that he needs.”

Although the disease has changed the life of the whole family, Conor’s mom Susie Hubbell said the last four years weren’t without hope. Recently her son started regularly taking his medications without supervision.

“It’s been a trying last four years,” said Susie Hubbell who lives in Las Vegas. “But he is getting better. We see progress in the last few months.”

Shortly before he was diagnosed with the disease, Conor was able to finish high school in Tucson, Arizona, and Susie Hubbell said he had already gotten scholarships and grants but wasn’t able to go back to school because of his disease.

With the help of the event, the Hubbells said they are hoping to draw the public’s attention to the issue of schizophrenia and the problem of mental health care.

“In a lots of ways, bringing it out in the open has been kind of a release. Letting everybody know, this is what my son has, this is what I have,” he said. “This is what I’m dealing with every day.”

Music with a Mission Benefit Show will take place Sunday at 2 p.m. at the Hubb, located at 3720 W. Bell Vista Ave.