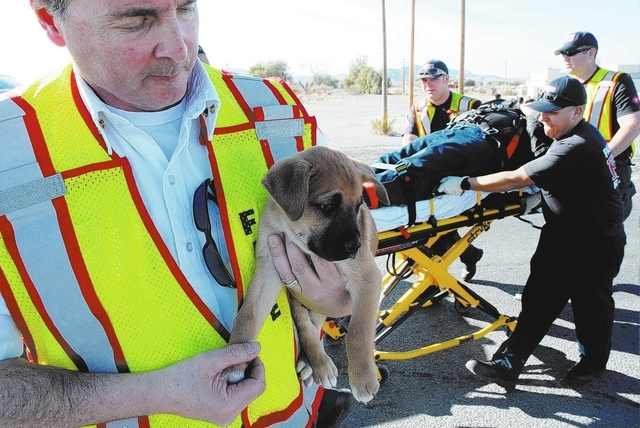 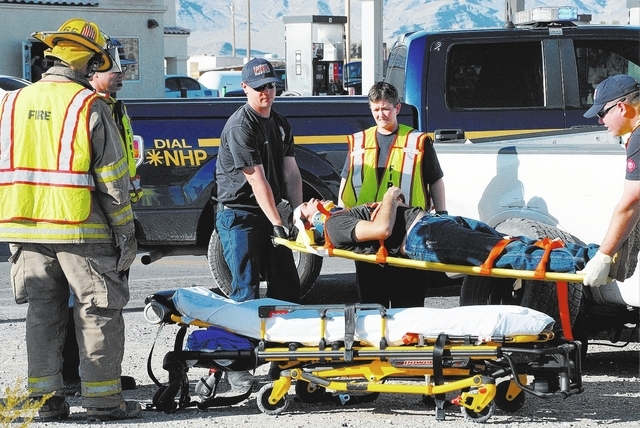 Three people were sent to the local hospital last week after two vehicles reportedly collided at the intersection of State Route 160 and Mesquite Avenue.

Pahrump Valley Fire Rescue Services were called to the intersection Friday morning for a report of a two-vehicle accident involving a red Jeep Grand Cherokee and a white Ford F150 pickup truck with possible injuries.

When crews arrived, Fire Chief Scott Lewis said medics evaluated two patients traveling in the Jeep as well as the driver of the pickup truck.

The two passengers from the Jeep were subsequently transported to Desert View Hospital for treatment of injuries sustained in the collision.

Although the driver of the truck at first declined medical treatment, Lewis said he too was later transported to the local hospital as well after he began exhibiting symptoms of possible injuries while at the scene.

“It was a two-vehicle accident with no entrapment. There were two patients in the Jeep, and the driver of the truck initially said he wasn’t injured, just shaken up, but then he started developing symptoms so we dispatched another ambulance to the location and had him transported as well,” the fire chief said.

As rescue crews worked to evaluate their patients and size up the scene, Lewis said he then noticed two other individuals who needed his help as well.

The fire chief said he discovered two puppies inside the Jeep Grand Cherokee.

One was sitting on the passenger-side floorboard, the other was trapped between the passenger seat and center console of the vehicle.

“There were two puppies in the Jeep Grand Cherokee. So we manipulated the seat in such a fashion as to allow us to extricate the puppy out and then we called animal control to secure the puppies and take care of them until either of the individuals from the Jeep were out of the hospital,” Lewis said. “The puppies seemed to be OK, but (animal control) was going to have them checked out just in case. But I think they were OK.”

Both vehicles reportedly sustained significant damage as a result of the collision.

The Jeep reportedly had extensive damages to its front end and the white Ford pickup truck had the rear quarter panel and wheel ripped off of the vehicle as well.

The highway was shut down in both directions at the intersection for a period of time while medics tended to the injured passengers and Nevada Highway Patrol investigated the collision.