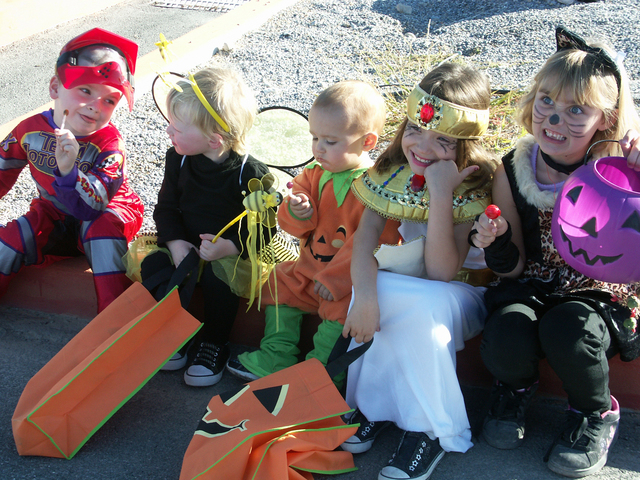 In just a few short hours, revelers of young children and beyond will make their ritualistic journey throughout the community in search sweet treats.

But Halloween in Pahrump can present numerous challenges for trick-or-treaters.

A majority of homes have much acreage surrounding the residences, which often forces kids to walk a good distance just to knock on doors. Many homes also have fences and gates to keep animals and belongings in while keeping intruders out.

Lewis suggested that parents should chart out exactly where they plan to trick-or-treat to ensure additional safety for their young ones.

“It’s best to first determine where you are going trick-or-treating,” Lewis said. “You want to make sure there is good illumination and crosswalks with less vehicular traffic if possible. It’s also a good idea to stay in groups and carry a flashlight as well as a cell phone. And always let someone know where you plan to go trick-or-treating.”

Costumes were another topic of concern for Lewis. He said when choosing a costume, it’s best stay away from billowing or long trailing fabric. Those who choose to make their own costume should select material that won’t easily ignite if it comes into contact with heat or flame.

If your child is wearing a mask, make sure the eye holes are large enough so they can clearly see out of them.

“You want to make sure the costume is fireproof or treated with a fire-retardant material,” Lewis said. “You never want to carry an open flame like candles.”

Anyone driving about town this week surely have noticed Halloween decorations adorning homes in the valley.

“Everyone loves decorating their homes and wearing colorful costumes on Halloween, and we want them to enjoy it all,” said Carli in an email. “But this holiday can quickly turn hazardous if proper precautions aren’t taken.”

The National Fire Prevention Association’s most recent statistics show that decorations were the first items to be ignited in 920 reported home structure fires on average each year, resulting in six civilian deaths, 47 civilian injuries and $12.9 million in direct property damage.

In addition, nearly half of decoration fires in homes occurred because the decorations were too close to a heat source.

Forty-one percent were started by candles, while one-fifth began in the living room, family room, or den.

Aside from safety at home, Lewis, meanwhile, advised parents and children to stay extra vigilant when roaming around neighborhoods that are unfamiliar to them.

He also noted extra care should be taken by motorists this evening as children are always at greater risk as pedestrians because of their shorter stature and unreliable judgment about when and where to cross streets.

“Drivers want to make sure that they slow down and pay extra attention to their surroundings,” Lewis advised. “Always expect that a child may dart out in front of you. Children should also wear costumes that are easy to see in the night hours.”

According to a press release this week, from the Nevada office of the Automobile Association of America, the number of deaths among young pedestrians from 5-to-14 years of age is four times higher on Halloween, between 4 p.m. and 10 p.m.

The data also shows vehicle fatalities increase when Halloween falls on a Friday, Saturday or Sunday.

“We have seen traffic accidents and several pedestrian and motor vehicle accidents in the recent past,” he said. “We’ve also had a rattlesnake bite and obviously they are all serious issues. One of the things we’re concerned about is responding to these scenes where the kids are out. Drivers want to make sure that when they see emergency vehicles approaching, to get well off the road.”

While the celebration may be fun for two-legged creatures, it can be a traumatic experience for pets.

Cronin said this week there are easy steps to take to ensure your pet has a safe and happy holiday.

“Trick-or-treating with your pet or allowing it outside should be avoided,” Cronin said. “In the past, pranksters have teased, injured, or stolen pets on Halloween night.”

“Aside from black cats and all white animals, dogs are also at risk,” she cautioned. “There have been times where people throw poison in yards with pets and they think it’s funny. I know just from experience all of the cruelty that is out there. I’ve actually seen cats hanging from trees.”

“All forms of chocolate, especially baking or dark chocolate can be dangerous,” she said. “Even lethal, for dogs and cats. Symptoms of chocolate poisoning may include vomiting, diarrhea, rapid breathing, increased heart rate, and seizures. Trick-or-treat candies are not certainly for pets.”