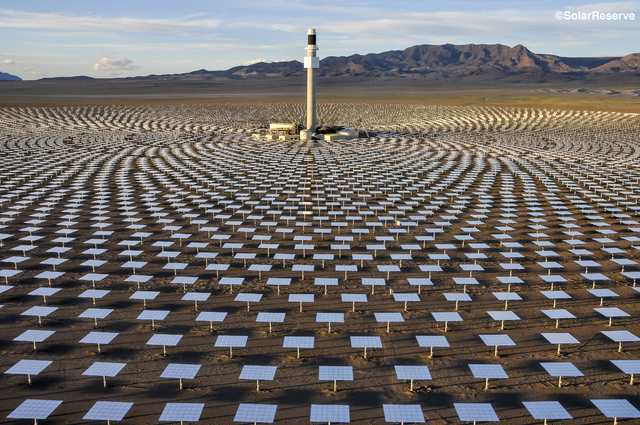 TONOPAH – Following criticism for what has been deemed by company officials as a media mishandling of information regarding incidental bird deaths during testing, the Nye County Commission received an update on the operation of the Crescent Dunes Solar Energy Project in Tonopah at a meeting on April 7.

California-based SolarReserve spokesman Rob Howe said the project is still in the testing phase and had been plagued by engineering issues early in the project. Those issues have been resolved and the company expects to be fully operational no later than mid-June, Howe said.

During a January test at the site, biologists counted roughly 115 birds that were burned when they flew through the beam of concentrated sunlight from the project’s mirrors. Beam temperatures can exceed 900 degrees.

The facility has not yet produced any electricity, but anticipates doing so near the end of this month. Once operational, he said, the plant will feed 110 megawatts of electricity into the grid. The Crescent Dunes facility differs from other plants in that it is equipped for 10-hours of storage and can produce power on the rare occasion that the sun is not shining.

The plant will generate approximately 500 gigawatts of power annually, Howe said, which is enough electricity to power approximately 70,000 homes. The company is optimistic that NV Energy will purchase power from the plant.

Howe explained the bird death incident occurred on Jan. 14 when facility heliostats were in standby position. Concentrated solar energy created a “halo” effect which caused bird fatalities when they flew into the “halo,” he said. The concentration of the solar energy has been dispersed into a different pattern with equipment modifications and no wildlife fatalities have been observed since the changes were made.

Since the incident, Howe said, the company expects public scrutiny. But, he added, “We believe that experience won’t be repeated. We believe we have solved the problem.”

The almost $1 billion project, backed by a $737 million federal loan guarantee, covers about 1,600 acres of federal land — a massive disc of more than 17,000 mirrors arrayed around a central tower nearly as tall as the Washington Monument.