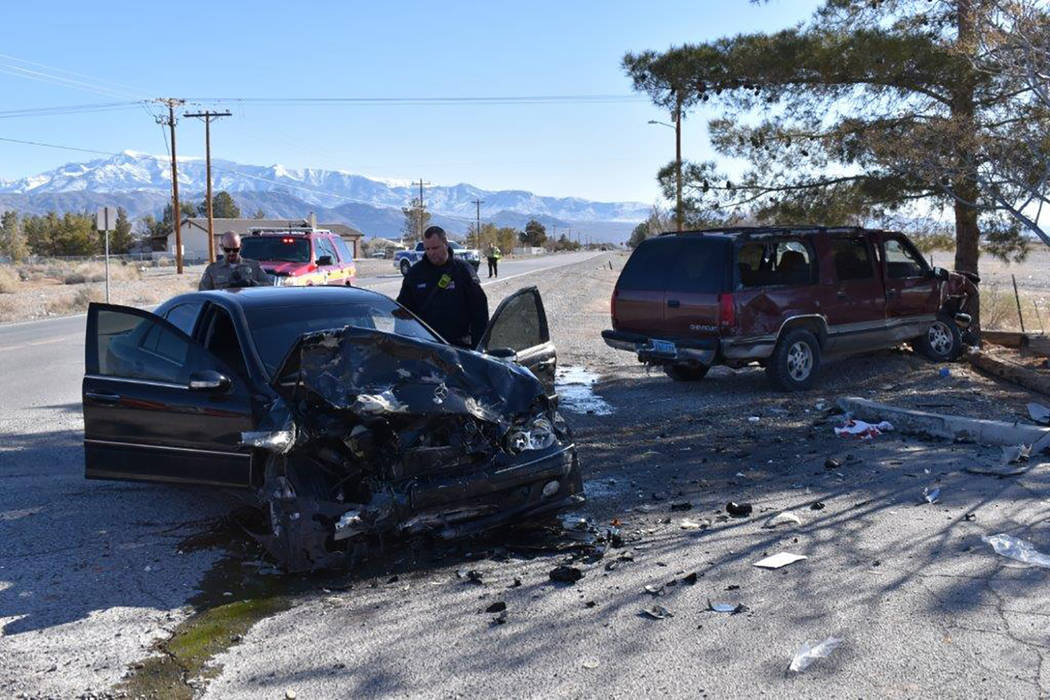 Special to the Pahrump Valley Times Two people were transported via Mercy Air to UMC Trauma in Las Vegas, following a head on collision at the intersection of Gamebird Road and Pahrump Valley Blvd just after 9 a.m. on Saturday Feb. 23. At least one person was medically entrapped within their vehicle. The Nye County Sheriff's Office is investigating the cause of the high-impact crash. 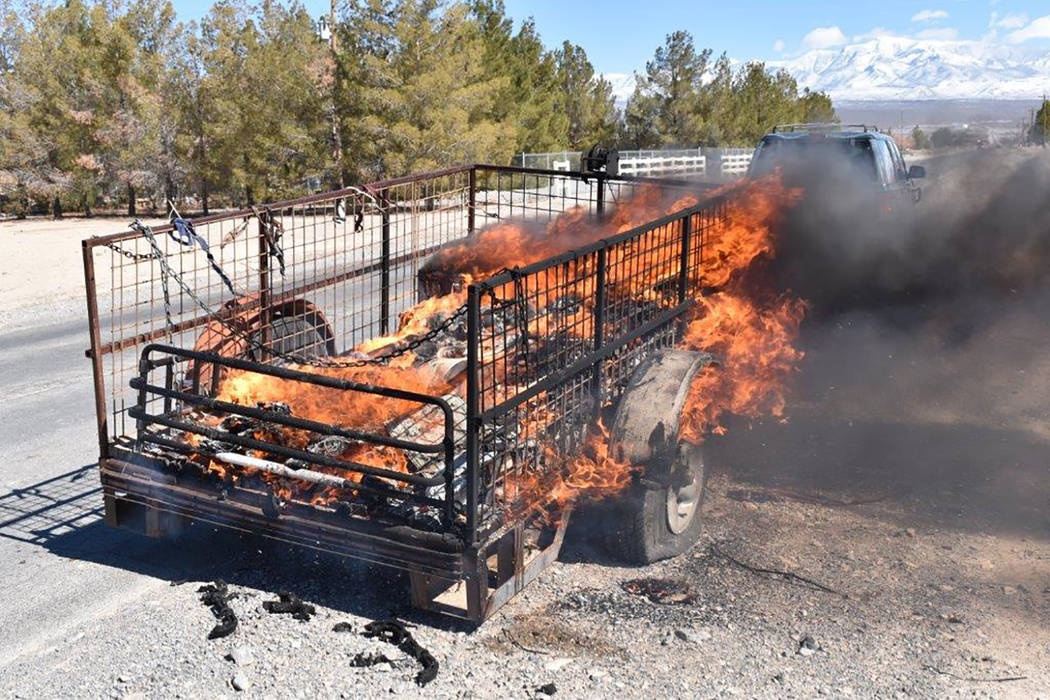 Special to the Pahrump Valley Times On Friday Feb. 22, fire crews responded to a reported vehicle fire in the area of Mesquite Road and David Street, just after 12:30 p.m. Pahrump Fire Chief Scott Lewis said The truck had been separated from the trailer, thus there was no extension to the vehicle. That fire was quickly controlled without further incident. No injuries were reported. 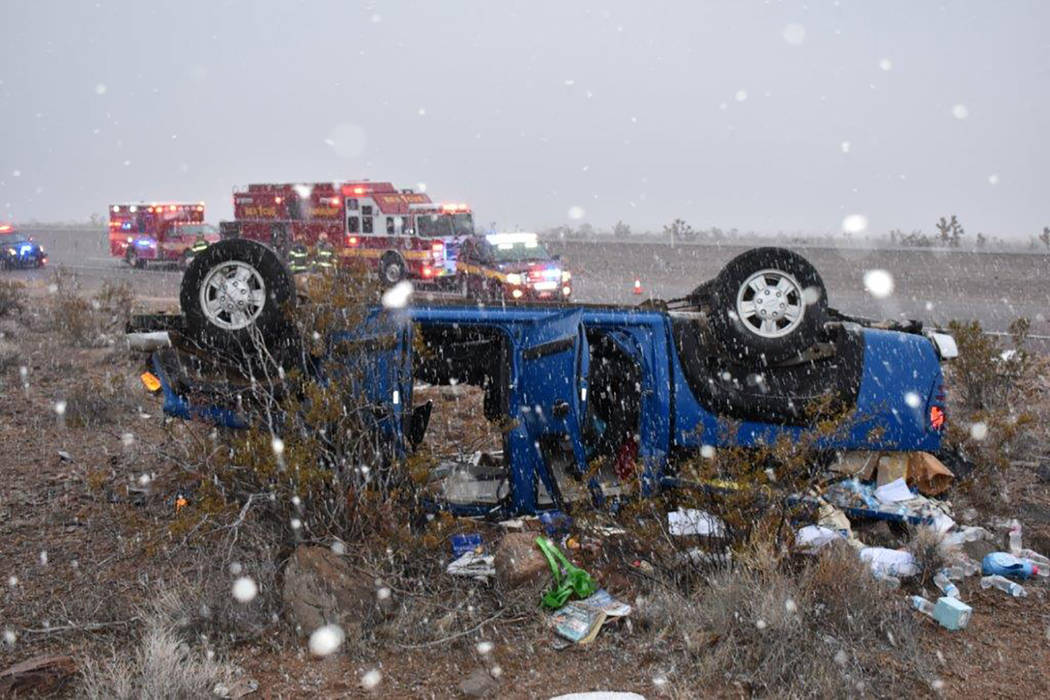 Special to the Pahrump Valley Times Pahrump emergency crews were dispatched on a mutual aid assignment along Highway 160 in Clark County for a single-vehicle rollover crash, with the driver mechanically entrapped. The crash near Mile Marker 37, is under investigation by NHP. The driver was transported to the hospital.

A high-impact head-on collision sent two people to the hospital on Saturday, Feb. 23.

“Upon arrival, we found the head-on collision, as reported, with one person being medically entrapped,” Lewis said. “Both patients were removed from their vehicles and transported to Mercy Air Base 21 where they were flown to UMC Trauma in Las Vegas.”

Roughly 12 hours later, emergency crews were summoned to a challenging structure fire on the 1700 block of East Heritage Drive.

“Upon arrival, crews found moderate smoke showing from the structure,” Lewis said. “They mounted an interior attack and controlled the main body of the fire, however, the fire was found to have gone from a laundry room heating unit down to the other side of the structure, where it essentially had run the entire length of the structure prior to its discovery.”

Lewis also said that all of the home’s insulation had to be removed due to the smoldering conditions that existed well after the fire was under control.

“There were no injuries reported, but it was a lot of work,” Lewis noted. “The crews were in a two-foot-deep area with probably about a foot of water inside for a couple of hours. All of the insulation was underneath that structure.”

Just one day prior, on Friday, Feb. 22, fire crews responded to a reported vehicle fire in the area of Mesquite Road and David Street, just after 12:30 p.m.

“Upon arrival, crews found the contents of a utility trailer that was fully involved,” Lewis said. “The truck had been separated from the trailer so there was no extension. The fire was quickly controlled without further incident and there were no injuries.”

Also on Friday, crews were dispatched for a structure fire on the 4100 block of West Bell Vista Avenue, just before 3 p.m.

“Upon arrival, crews found a manufactured dwelling with an attached wood frame structure,” Lewis said. “There was heavy smoke showing from the backside and the underside. The fire was controlled about 30 minutes after arrival. It was determined that an improperly installed stove had failed. No one was home at the time, and there was an overabundance of personal property both in and outside of the structure as well as being strewn about the property.”

While fighting that blaze, crews responded to another structure fire on the 1200 block of West Sierra Vista Street at 3:17 p.m.

“Mutual aid was requested as there were six other medical events going on at the same time,” Lewis said. “Mutual aid assisted us at the West Sierra Vista address where they found a room and contents fire, that being a bathroom and it was quickly controlled without further extension. It was determined to be accidental in nature and believed to be related to improperly discarded smoking materials in a trash receptacle.”

On Thursday, Feb. 21, at approximately 4:12 p.m., emergency crews were dispatched for another mutual aid assignment on Highway 160 in Clark County for a single-vehicle rollover crash.

“This rollover, with the patient mechanically entrapped, was near mile marker 37,” Lewis said. “Crews arrived to find the vehicle resting on its roof. Once extrication was completed, that patient was transported to the local hospital. The investigation is being conducted by NHP.”

Lewis also spoke about responding to service calls during the recent inclement weather.

“Highway 160 was the bigger problem,” he said. “We responded to several motor vehicle accidents as part of our mutual aid agreement. Most of them were rollovers and spin-outs and other incidents along those lines. Here on the valley floor in Pahrump, it wasn’t that bad, but as soon as we got out on 160 and got past the county line, then we started getting more accidents.”