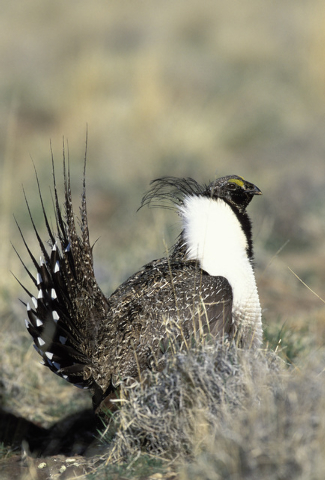 Concerns about potential future protection of the sage grouse scared off bidders for all but one of 97 oil and gas leases the U.S. Bureau of Land Management offered at auction Tuesday for energy exploration across about 300 square miles of northeast Nevada.

Patricia LaFramboise, chief of BLM’s minerals adjudication branch, said concern about the potential federal listing of the greater sage grouse under the U.S. Endangered Species Act was the main reason only one of the six representatives of the oil and gas industry offered the lone bid for the single 473-acre parcel in Nye County at the minimum $2 per acre.

Kirkwood Oil &Gas LLC of Casper, Wyoming, paid a total of $1,814 for the 473-acre parcel, the BLM said. A company spokeswoman said no one was immediately available to comment.

The 97 leases that went on the auction block covered more than 186,000 acres of northeast Nevada, from north of Austin to near the Utah border.

“This is how we anticipated it would go,” LaFramboise told The Associated Press after Tuesday’s 45-minute auction.

“Sage grouse is a huge issue here. We’ve removed a lot of the parcels for sale until the Fish and Wildlife Service makes its decision,” she said. “The areas of interest have some serious environmental impacts.”

The U.S. Fish and Wildlife Service is scheduled to decide in September 2015 whether to grant a petition by conservationists to list the bird as threatened or endangered, a move that could trigger significant new restrictions on ranching and mining as well as energy exploration on federal lands across much of the West.

The federal omnibus spending bill being considered by Congress this week includes a provision preventing the U.S. Fish and Wildlife Service from finalizing a decision on threatened or endangered status for the greater sage grouse during the 2014-15 fiscal year, which would delay action beyond September. A vote on the spending bill wasn’t finalized by press time. Congress must pass a funding bill by today to avert a government shutdown.

As recently as Nov. 20, BLM amended its plans to offer the Nevada leases. It removed more than 3,700 acres under a new agency policy that has put lease sales on hold across more than 8 million acres in 11 western states to keep exploration away from priority grouse habitat.

“Today was a victory with only one small parcel of public land leased for drilling, but at a rip-off price of $2 an acre,” said Daniel Patterson of the Center for Biological Diversity, one of the groups that organized the protest with a coalition of conservationists, tribal leaders and others.

“With our water at risk, and such little industry interest, why is the Obama Interior Department pushing fracking? BLM should cancel leasing plans in Nevada,” he said.

Tupper Hall, vice president of communications for the Western States Petroleum Association based in Sacramento, California, said he’s not familiar with details of the Nevada leases, but “it has become obvious that the more radical anti-oil groups like the Center for Biological Diversity can be counted on to raise the same inflammatory and entirely incorrect concerns about hydraulic fracturing anywhere petroleum-based energy production is occurring.

“The overwhelming consensus of regulators and knowledgeable hydrologists and geologists is that hydraulic fracturing is a safe, well-understood and effective technology,” Hall said in an email.

Erik Molvar, a wildlife biologist for WildEarth Guardians in Wyoming who filed a formal protest against the sale of all 97 leases, praised the BLM for scaling back original plans to offer nearly twice as many leases for an area covering more than 500 square miles with key habitat for sage grouse as well as a rare fish in the White River basin.

“Nevada BLM has done a really good job on behalf of sage grouse and on behalf of those rare spring fish,” Molvar said. “They deserve a lot of credit for showing leadership on that.”

But he and other critics said the use of fracking to get to oil and gas deposits beneath Nevada’s high desert will continue to be a threat to water quality and quantity.

“Nevada’s precious groundwater should not be sacrificed for short-term profits of corporations,” said Bob Fulkerson, executive director of the Progressive Leadership Alliance of Nevada. “In our arid desert, groundwater should always trump oil.”