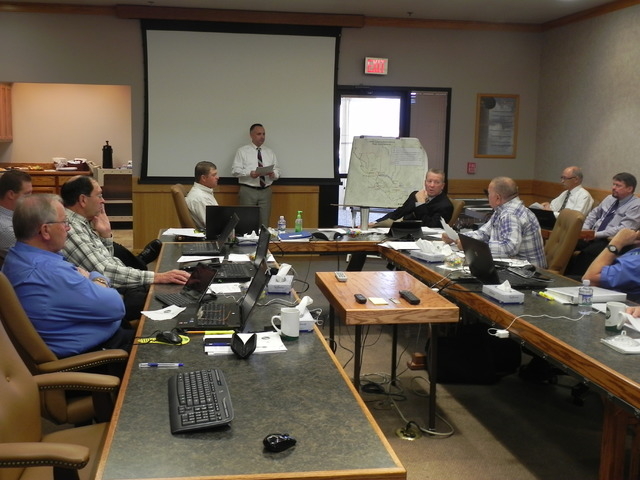 Chris Brooks, Valley Electric Association executive vice-president of energy services, has been busy making the rounds of state legislators in preparation for the upcoming 2015 session which begins in February.

“Leading up to this legislative session we’re getting started very early and very proactive in discussing our business model,” Brooks told the association’s board of directors Wednesday. “We’re not asking anything from anybody, we just want to educate our legislators and our regulators on our business model and how we operate.”

Brooks said he had a chance to meet with every member in leadership positions in the Legislature and chairmen of important committees like government affairs, labor and commerce that govern the energy industry in the state.

“Every single legislator I met with had a very positive — if not before we started talking definitely afterwards — a very positive outlook on Valley Electric and how we do business in the state,” he said.

But Brooks added there were some legislators who had to be brought up to speed on what Valley Electric is doing. He pledged to be very proactive in speaking to them on a regular basis.

Brooks was hired in June to manage distributive generation programs, specialized government contracting particularly with renewable energy, legislative duties and managing marketing and member services. He was formerly the director of Bombard Renewable Energy in Las Vegas for 10 years, where he helped develop 700 renewable energy projects including the solar array at Nellis Air Force Base.

Among the contacts he made, Brooks said he spoke with Sen. Kelvin Atkinson, D-North Las Vegas, chairman of the Senate Commerce, Labor and Energy Committee. He met with Sen. Mike Roberson, R-Las Vegas, the minority leader in the Senate who had a lot of background on cooperatives and how they work.

Brooks said he met with State Sen. Majority Leader Mo Denis, D-Las Vegas, who used to be an employee of the Nevada Public Utilities Commission, but there was a lot he didn’t know about Valley Electric.

On the Assembly side, Brooks said he met three times this month with Assemblyman David Bobzien, D-Reno, the author of renewable energy legislation who chairs the Assembly Commerce and Labor Committee. He reported having a good conversation with Assembly Speaker Marilyn Kirkpatrick, D-North Las Vegas, the ranking energy legislator in the assembly who he said was really important to Valley Electric.

Brooks made contact with Assemblyman Teresa Benitez-Thompson, D-Reno, a member of the Assembly Taxation Committee, who he said was a specialist on energy. He also met with Assembly Minority Leader Pat Hickey, R-Reno, for the first time, adding, “he is very supportive of Valley Electric and had a lot of information from years past on how we operate.”

Brooks met with Assemblyman Richard “Skip” Daly, D-Sparks, who he speaks with frequently, and after their conversation, Brooks said he understands better how regulations can affect the association members and the good communication between the board and its members.

Daly sponsored a bill in 2013 Legislature that would have required Valley Electric to comply with Public Utilities Commission regulations.

Daly said in 2013 the association should be operated with PUC oversight because it was going outside its service territory when they signed a five-year, $61.6 million contract to provide electric service to the Nevada National Security Site, and a 50-year, $23.6 million contract to maintain the electrical system at Creech Air Force Base in September 2012.

Valley Electric Chief Executive Officer Tom Husted testified before the Legislature that PUC oversight would’ve required the co-op to increase its rates by 7.5 percent to comply with the additional regulations.

The bill passed the Assembly by a 24-14 vote and the Senate by an 11-10 party line vote, but was vetoed by Gov. Brian Sandoval.