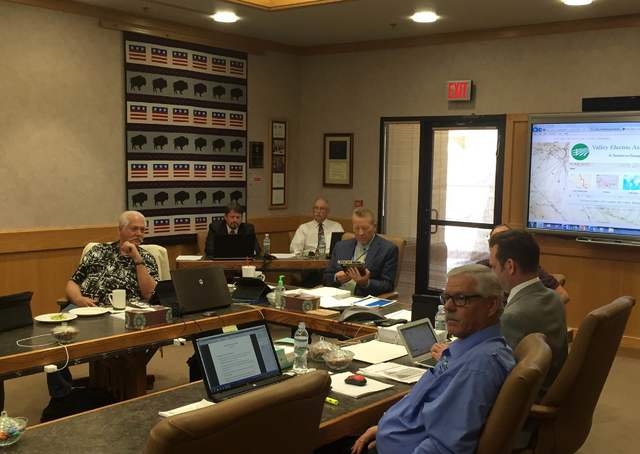 Valley Electric Association, Inc.’s board of directors voted unanimously to approve the resolution to increase its electrical rates by 9.9 percent.

The new adjusted rate, which was recommended after an independent third-party cost-of-service study by the firm Black and Veatch, will go into effect July 1, and will be VEA’s the first increase since Jan.1, 2010.

The co-op held the first three in a series of six public meetings on the subject this week, and VEA chief executive officer, Tom Husted, explained the members have been positive about the rate adjustment for the most part.

“Overall, the understanding of our members has been great,” Husted said. “Once we explain the situation Valley has been faced with and what we’ve had to undergo since the last increase in 2010, they have been very understanding.”

Husted explained the main catalyst behind the rate hike is the expansion of VEA.

Those assets, which includes Valley Communications Association, have grown by about three times the amount since the last rate adjustment, according to Husted and the employee base has remained the same.

Husted said the only other way to grow at the rate they want to and not raise rates would be to cut, which would mainly be employees. He explained that is not an option this time around.

“So now we’re starting to grow that with the hiring that we’ve been doing, and the demand on our system has been greater,” Husted said. “Whether it’s been on the physical aspect, through the transmission distribution system, or whether it be through the employee base.”

One of the biggest concerns brought up in the trio of meetings this week are from those who are retired or aren’t in the workforce.

“A lot of folks expressed that they are on fixed incomes and how this would affect them,” Husted said. “They said that there has been other increases in their lives in their budgetary process.”

Husted said that the company understands members’ needs as far as fixed income goes and assures that VEA is doing everything in its power to hold down their costs, as they have done since the last rate increase in 2010.

The rate hike will be an accelerated one as Jan. 17, 2017 was originally planned as the date for a possible increase, but the acceleration of the hike was decided upon by VEA, before the cost-of-service study was carried out.

With all he’s heard thus far from members, Husted said he didn’t see any reason not to move on with the rate increase.

“My position remains the same,” Husted said. “We have to keep the company healthy. We have to move forward. We have to make this rate adjustment.”

If you would like to find out more about the rate increase or give your input, there are three remaining public meetings on the matter.