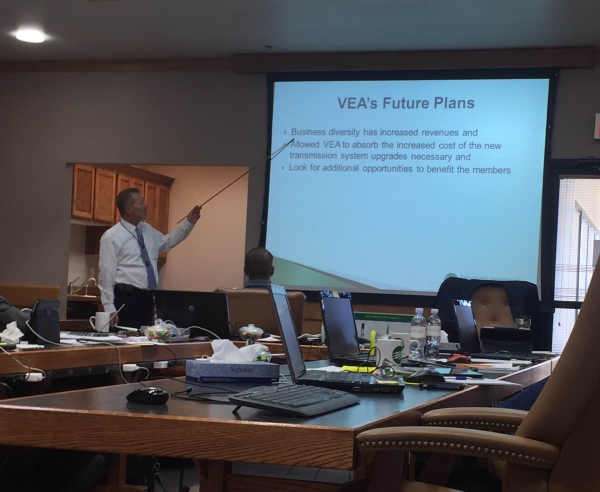 Valley Electric Association decided a recently proposed rate hike was not necessary at its board of directors meeting Friday.

After the word broke about a rate hike being possible last month, the public didn’t take the news so well and they let VEA know.

Executive Chief Operating Officer Rick Eckhart presented various scenarios on how VEA could stave off raising prices for the rest of 2015 and possibly for a couple of years with Tom Husted, Chief Executive Officer, chiming in throughout.

“So we’re going to end the year with about $100,000 net profit and we had budgeted to be about $1.9 million. So we’re about 95 percent below budget on the end of year,” Husted said. “We are going to end the year in a positive fashion, it was already intended to be very, very slim so our recommendation is don’t do a rate adjustment between now and the end of the year.”

Husted went on to say that the profits are not “bright shiny margins” but in light of the members and the economy it wouldn’t be wise to heighten rates.

“You raise rates for a month or two for this year and next year, we’re part of the problem, not part of the solution,” he said.

All predictions point to 2017 being the year VEA initiates a rate hike, with various variables that could possibly affect how much the price rises when and if it does.

Luckily for members, this is not the case.

New business accounts, the emergence of Valley Communication Association, which is the co-op’s broadband initiative and other deals should significantly drop the amount the rates are raised in the future.

With broadband incorporated alone, the rate that is recommended would be 10.78 percent.

VEA is also scheduled to take over operations for a currently unnamed electric organization around the fourth quarter of 2016 which will bring in additional revenues and cut the possible rate hike in 2017 to 8.99 percent.

“We’ve already kicked 40 percent of rate increases down the road, just by these other activities. If we’ve got two years out to face this next one, piece of cake. We’ll just continue to look for opportunities to make ourselves more efficient, reduce costs and increase revenues.”

Aside from the rate increase an issue affecting VEA in a negative manner was also brought up.

The stealing of copper ground wires throughout the co-op’s service area impacted them in a six-figure loss.

“Well over $100,000 was the result of ripping ground wires off of transmission structures,” Eckhart said. “Talking with our production crew, the problem is even more pervasive than we’re even aware of.”

Husted said that the majority of the theft takes place in Pahrump with Amargosa Valley also seeing its fair share of the vandalism.

To combat the issue, VEA is going to install copper-coated wires, which have no scrap value. Visually it’s tough to know which wires are the copper wire and the copper coated wires, so to deter the criminals the co-op has a plan in place to inform those who plan to dig up the wires.

“We nail a tag to the pole that says that this isn’t copper, this is steel,” Eckhart said. “So don’t steal it.”

Husted mentioned that since VEA has been installing the new wire that there have been no thefts that he’s aware of.