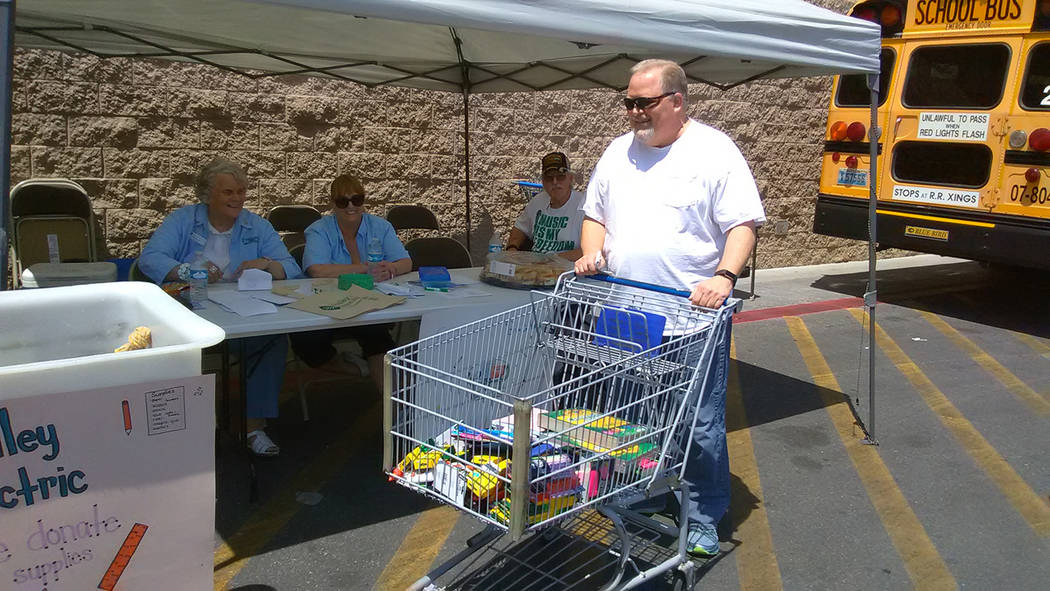 Selwyn Harris/Pahrump Valley Times A shopper at Walmart prepares to drop off school supplies in VEA's bucket on Saturday as the annual "Fill the Bucket" campaign returned just in time for the start of school. VEA ambassadors and volunteers collected hundreds of much needed supplies. 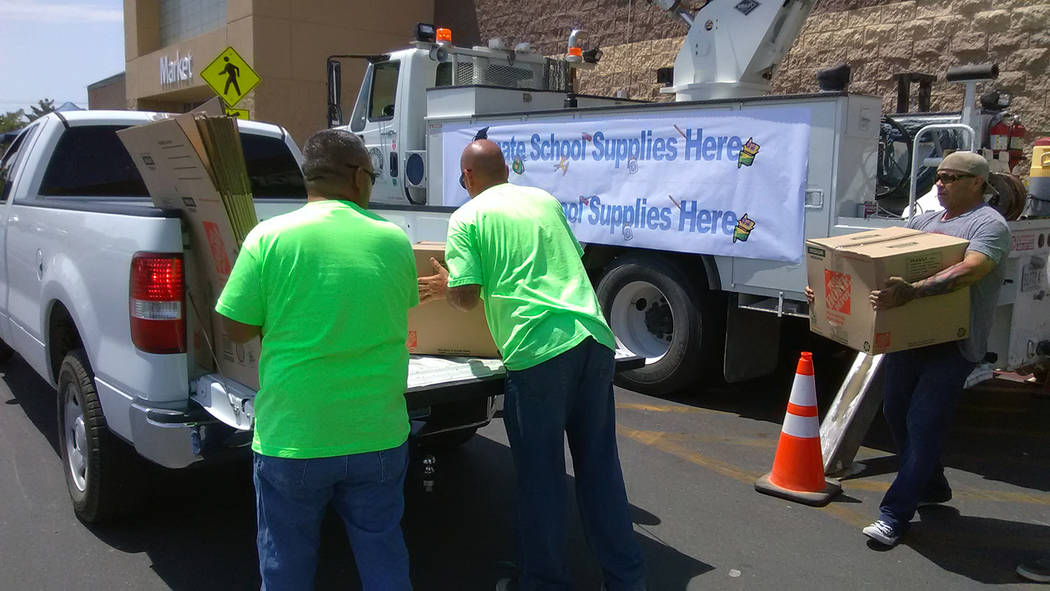 Thanks to a popular annual back-to-school event, Nye County School District teachers and students will have access to supplies crucial for their studies, as Valley Electric Association’s (VEA) “Fill the Bucket” campaign returned on Saturday, Aug. 5.

The supplies, donated by shoppers at Albertsons, Smith’s and Walmart, are destined for students attending school within VEA’s service territory.

VEA ambassadors volunteered their time to collect the items, as well as distribute them, VEA’s Cassandra Selbach said.

It should be noted that the ambassadors and volunteers endured triple-digit temperatures during the four-plus-hour collection drive.

“Dozens of our ambassadors and staff volunteered their time on Saturday collecting school supplies,” she said. “Each year, members are excited to support the event by dropping supplies into the bucket as they exit the stores. Many shoppers also donate money, which is then used by the volunteers to purchase the needed supplies.”

Frank Bonesteel, chairman of the Ambassador Executive Committee, said the annual event, which began in 2007, has its roots in the Seven Cooperative Principles, several of which focus on education and concern for community.

“The program has been a favorite of VEA staff and ambassadors ever since.”

Selbach, meanwhile noted the ambassadors gathered on Monday of this week to organize and package the materials in order to get them to schools as soon as possible.

Additionally, Selbach said the campaign was a huge success.

“The ambassadors and employees showed up to volunteer collecting the school supplies, as well as the community showing up to donate them,” she said. “It was a great collaborative effort between the volunteers, the community, Walmart, Smith’s and Albertsons, who agreed to take part in this important endeavor. This year, we also collected school supplies here in the office, prior to Saturday’s event.”

Prior to the campaign, VEA officials were hoping to break last year’s record of 37 buckets, however, that effort fell a bit short on Saturday.

Despite that, Selbach said she feels more supplies were collected this year when compared to last year.

“We filled 31 and a half buckets, however, it’s important to note that we had more community school supply drives this year,” she said. “Ours was the last effort to collect additional school supplies.”

“Even though we didn’t break the record this year, I feel that the community at large came together more than it ever has and in that respect, we did break the record. Collectively, we were able to collect more supplies than we ever have before as a community. I was incredibly encouraged this year.”