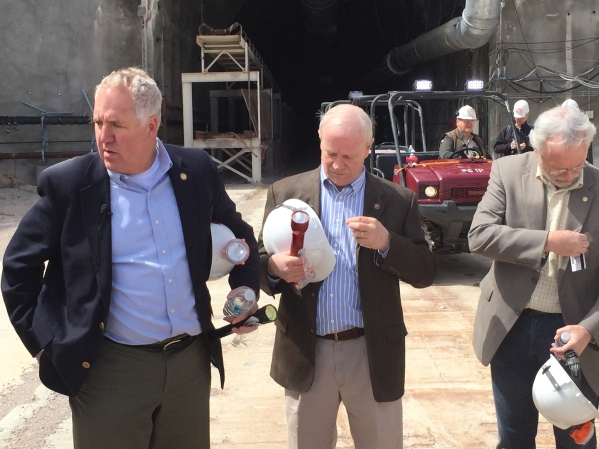 WASHINGTON – Southern Nevada community and business leaders on a lobbying trip to the nation’s capital got a pitch Sept. 10 on Yucca Mountain from the leading supporter of the controversial nuclear waste program.

Rep. John Shimkus, R-Ill., spoke to members of the Las Vegas Metro Chamber of Commerce on their annual visit to promote the priorities of the local business establishment. During the roughly half-hour briefing, Shimkus reminded them that Yucca enjoys strong support in the House and urged them to consider possible roles for Nevada if the mothballed repository site is revived.

“He implored us to think about it, to consider how we might want to help manage the process should it happen,” said Kristin McMillan, chamber president and CEO.

She added conversation was “rather spirited in the room,” which was closed off to a reporter.

Participants in the room said reaction to Shimkus was mixed. He was challenged on why Nevada should be the nation’s nuclear dumping ground. But also there were questions whether the state should be open to engagement if the Nuclear Regulatory Commission were to conclude the site 100 miles northwest of Las Vegas could be safe to store highly radioactive material projected out to a million years.

“What they were asking, and the point I was making was, if this is moving forward, shouldn’t they have a seat at the table?” Shimkus, the chairman of a House energy subcommittee, said after the meeting.

And while it was not spelled out, McMillan said “everyone is cognizant” that Sen. Harry Reid’s retirement after next year could shift sentiment in the Senate. Using his powers as a Senate leader, Reid has blocked Yucca bills for years.

Shimkus said his message was that “the dynamics are changing” on Yucca, and “do you want to be at the table or don’t you?”

The Las Vegas Metro Chamber of Commerce officially opposes the Yucca repository as a potential threat to the state’s tourism and gaming economy. McMillan said the chamber is not troubled “at this time” by the positions of the state’s three Republicans in the House.

“I think we need to continue to understand, to be educated, and talk to people.” McMillan said. “It was good for us to hear from Chairman Shimkus today. We need to understand the realities before Congress.

“The chamber is continuing to take the position that we are opposed but that’s not to say we want to cut off conversation,” she said.