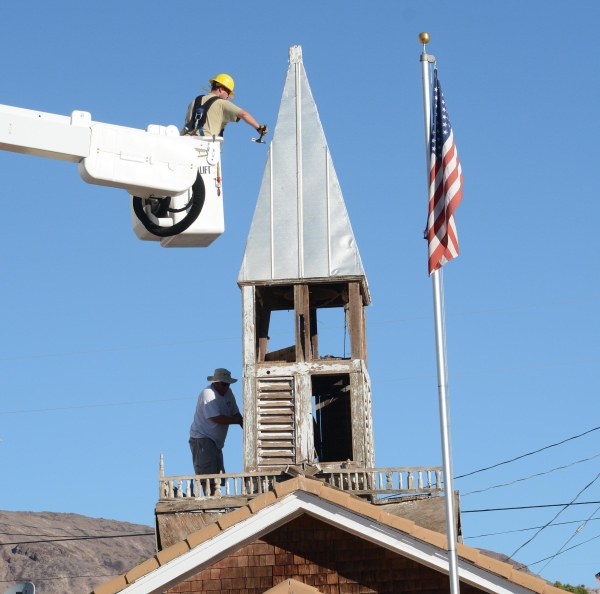 BEATTY – Residents who have directed their gaze upward while driving down Main Street may have noticed a bare-bones look to the steeple atop the VFW Post, the former Episcopal church.

The post raised money with a poker run last October to renovate the steeple, which was showing its age. It was built sometime in the 1950’s.

“I’ve heard that the building was moved to Beatty from Rhyolite,” says post member Karl Olson, who works as a volunteer caretaker in Rhyolite, “but it is a stone building. There is no way it was moved.” He adds, however, that the stones in the walls may well have come from stone walls in Rhyolite.

VFW member Joe Moorehead, who works at Toliche Peak, north of Beatty, but lives in Pahrump, is doing the woodwork on the project. He is using the panels that were removed from the steeple as patterns to make the new ones. Examination of the panels proved that they were not of uniform size.

Olson, who is in charge of the post’s poker runs, says they hope to have the work completed in time for this year’s poker run, which is scheduled for Oct. 15.