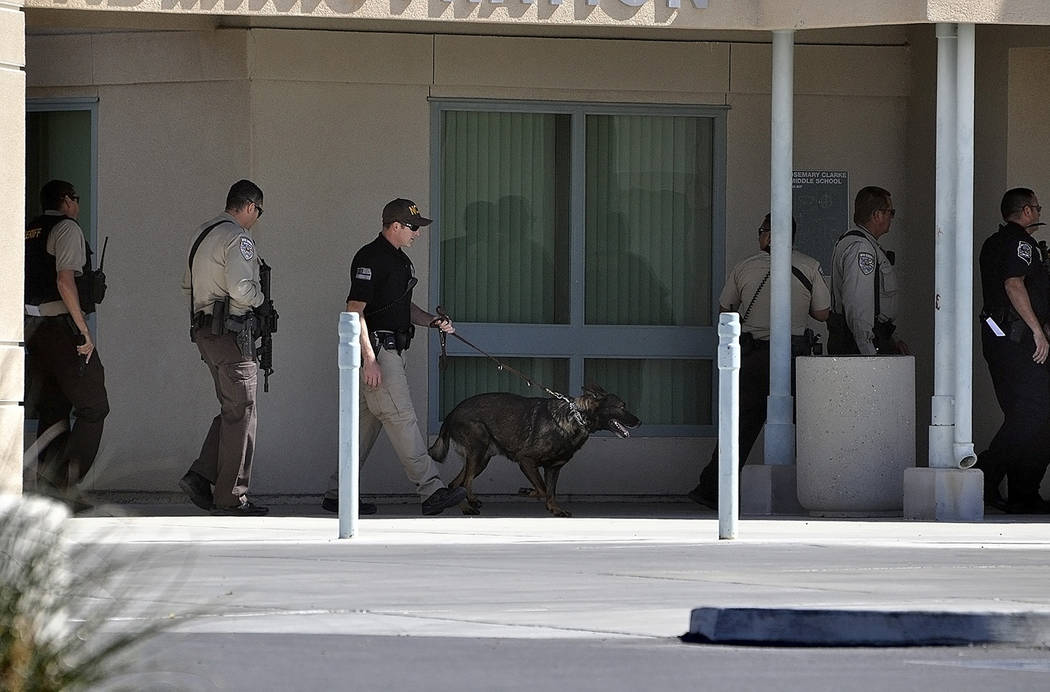 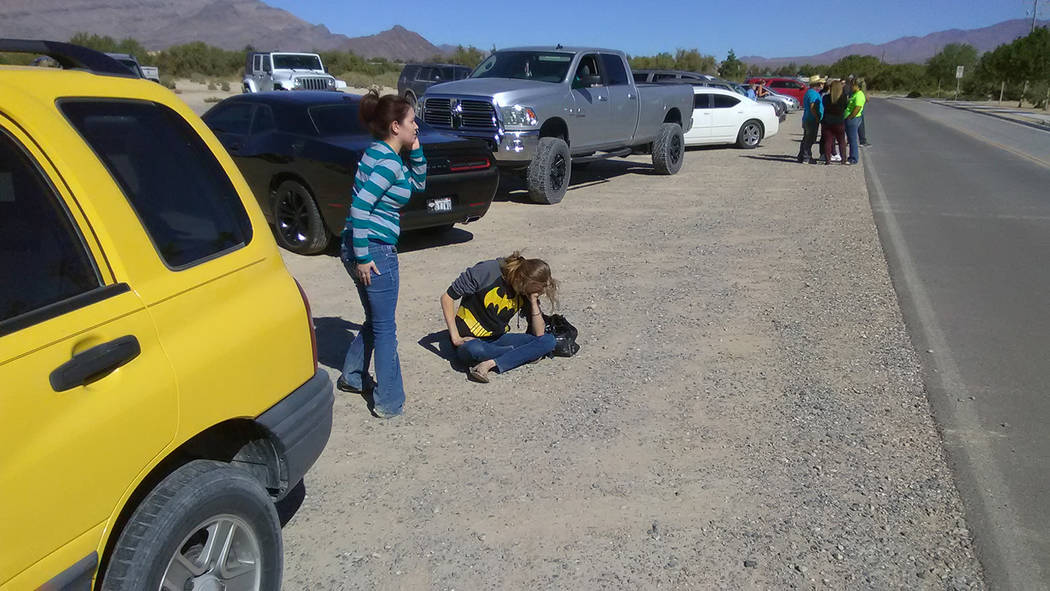 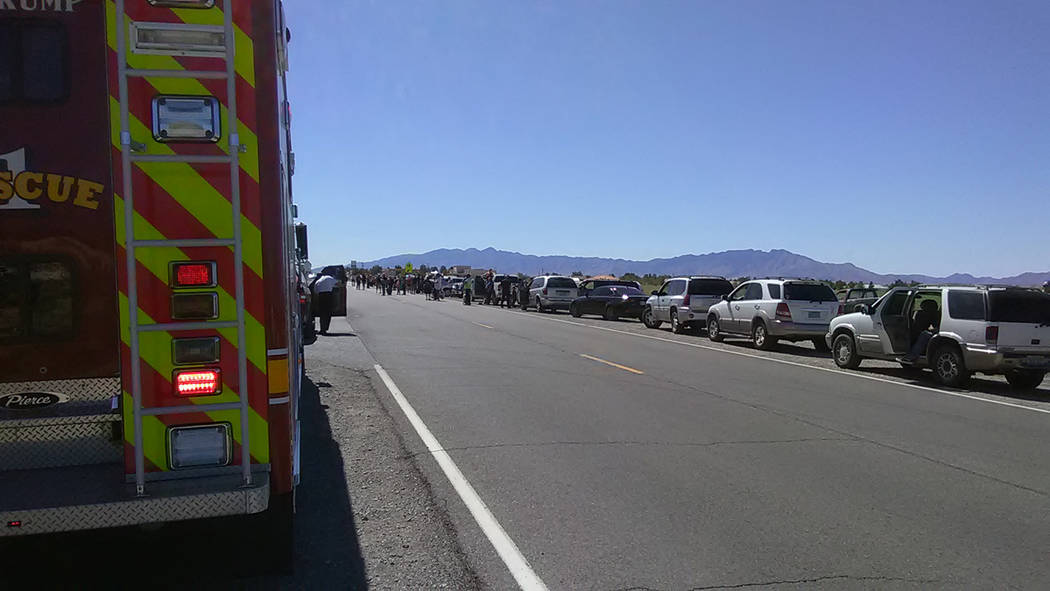 Scores of parents line Blagg Road as sheriff’s deputies search Rosemary Clarke Middle School for a wanted suspect. School officials released students to their parents after the threat was determined to be unfounded. 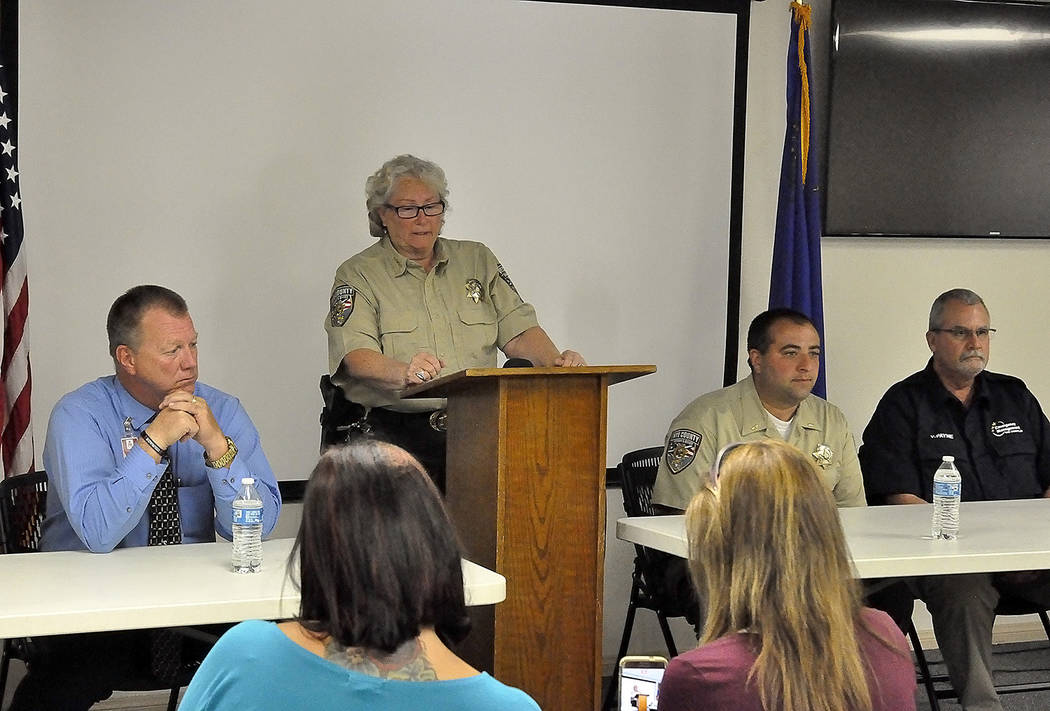 Several Nye County schools in the southern attendance area were put on lockdown Monday morning after a wanted felon was spotted at an elementary school by a Nye County Sheriff’s deputy.

During that time, several reports of an individual possessing a gun were received by Nye County dispatchers, prompting a lockdown of the campuses.

The initial incident occurred just after 9 a.m. at Manse Elementary School, located at 4881 Lola Lane, according to a sheriff’s office press release.

The suspect was identified as Duane Johnson, who authorities said has a violent past.

“When deputies attempted to apprehend him, he ran into the school,” the sheriff’s office news release stated. “The school was placed on lockdown while deputies searched for him.”

While performing a search of the campus for Johnson, the Nye County Sheriff’s Office dispatch received a report of a man with a gun at Floyd Elementary School, just after 10 a.m.

Sheriff’s deputies responded and cleared the school, as the report was deemed false.

During the two searches, the Nye County Sheriff’s Office received a report of a man with a gun at Rosemary Clarke Middle School, where deputies responded and cleared the school as that report was also deemed false.

As a result, a joint press conference was scheduled Monday afternoon, where Nye County Sheriff Sharon Wehrly sought to lay out the facts to Pahrump media outlets.

Wehrly began with the Manse Elementary School incident, where she said the wanted suspect was dropping off a child at the campus, where a deputy was also stationed.

“When the deputy tried to stop and detain him, he ran inside the school, which started a massive manhunt,” Wehrly said. “We were unable to locate him inside the school. At no time were our children in danger. About three-quarters of the way through our search, we found that someone had called regarding a person with a gun at Floyd Elementary School.”

Wehrly also said that in the meantime, Desert View Hospital was contacted, where officials performed a “soft shutdown” while preparing for the worst.

Additionally, all Nye County and town of Pahrump government offices were closed as precautionary measures, as was the courthouse on Basin Avenue.

“As things progressed during the day, each one of our searches came up with nothing,” Wehrly said. “Each one of the cleared schools came up as a false report.”

She and additional family members have children attending several schools in town.

“I have two of my own, along with nieces and nephews in school,” she said. “I’m pretty emotional because we had two kids out of Manse, after their lockdown was released and we also have have two kids out of Floyd, and we’re waiting for Rosemary Clarke to be released. I have one kid inside texting me because he doesn’t have a clue about what’s going on out here.”

He was one of more than a dozen parents waiting across the street for information from the sheriff’s office.

“I have three children here and me and my wife are both terrified out here,” he said. “We just want them to come home safely along with all of the other children inside. We heard about this on a Facebook post. I’m more than frazzled. I’m about ready to home school all of my children.”

“To have the collaboration with all the different divisions here in Nye County went smoothly,” Boruchowitz said. “We were obviously stretched thin while running several calls at once, but we were glad we were able to accomplish it in a manner that went as well as it did. These calls are not ones that we enjoy going to. In fact, they are horrific, especially when our children are at the schools that we are responding to.”

“I’m really proud of the collaboration between the sheriff’s office and the Nye County School District,” Norton said. “My staff at the schools were tremendous and I also have to say to the parents, that they were very understanding and thankful. The children were safe, the staff was safe and that was the ultimate goal. It disrupted our day, but at the end of the day, I’m glad to say that there were no casualties as a result of this event.”

Aside from the local agencies involved, including Pahrump Valley Fire and Rescue Services, Wehrly said even state agencies offered their respective services.

“I want to thank the Nevada Department of Investigations, the Nevada Highway Patrol officers, and the parole and probation officers that came to assist us,” she said. “Alcohol Tobacco and Firearms officials called to see if we needed any assistance even though they’re stretched pretty thin due to the events in Las Vegas. The Clark County school police called and wanted to know if they could assist us. Somehow it got out that we had an active shooter, but that was not the case. We have never had an active shooter and none of our transmissions would lead anyone to believe that there was ever an active shooter in any of the schools in the Pahrump attendance area or in Nye County.”