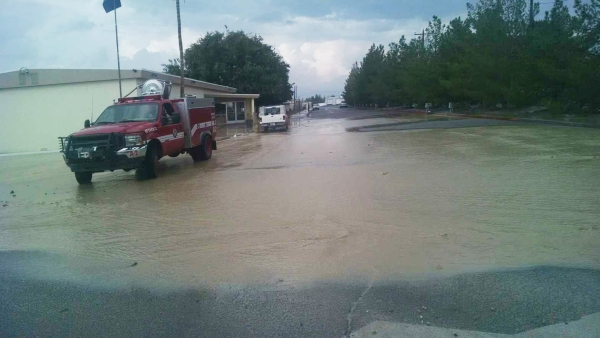 The weekend storms that rolled into town created havoc for area residents and first responders.

Crews from Pahrump Valley Fire and Rescue Services not only had to deal with roads littered with standing water, debris, and power outages, they also saw a significant increase in service calls.

Fire Chief Scott Lewis said many of the calls were for the valley’s elderly population.

“The number of respiratory problems increased, mostly due to the power outages that occurred,” he said. “Their oxygen machines were no longer operating and they didn’t have the necessary supplies in stock. We did experience a lot of medical evaluations.”

Lewis also said power surges from lightning strikes caused false alarms in both homes and local businesses, which created its own set of challenges for first responders.

He noted some of the greatest challenges for his crews came from residents who were not in need of emergency assistance.

“It was the sheer number of people who decided to go out and drive around unnecessarily during those hours,” he said. “We had a lot of people who were just flying through the water and those that because of their curiosity were out driving around. It created a lot of unnecessary traffic for us while we were trying to make a timely response and navigate the already flooded roads.”

“On Sunday evening we were called over to Amargosa to assist in a water rescue but upon arrival we were canceled,” he said. “As far as what occurred in Beatty and parts of Amargosa, our vehicle traffic in Pahrump increased significantly along Highway 160. With the power outages, it became even darker than usual, especially along the 160 corridor so we had to take all the necessary precautions and our response time suffered as a result.”

Lewis also gave accolades to all local government entities who worked together to deal with all of the weather-related challenges, including the Nye County Sheriff’s Office who added additional patrols, local road crews, the Nevada Department of Transportation and County Manager Pam Webster.

“We were all working together at very odd hours to make sure that everybody was as protected as we could possibly make it and keeping track of what was actually happening all over, all around,” he said. “It wasn’t just here in our valley but the immediate service area. It was a job well done and a really good effort by everybody that was involved.”