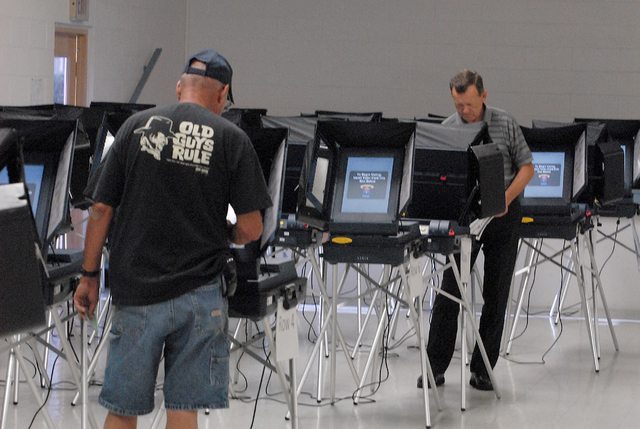 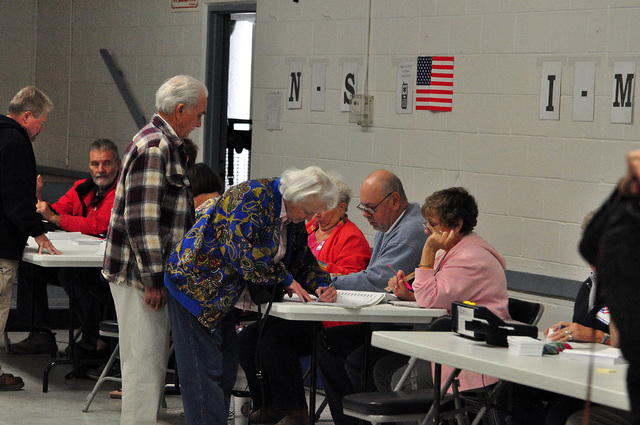 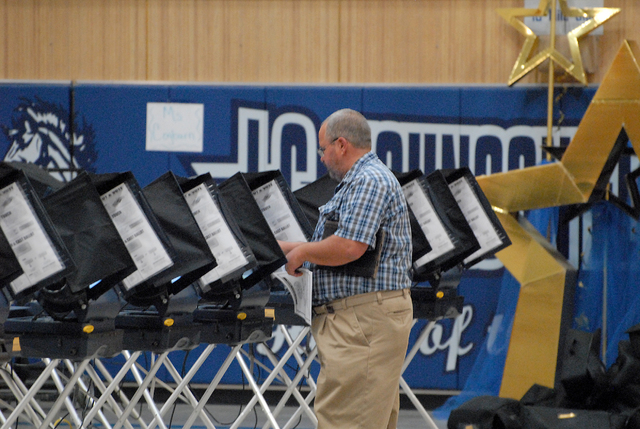 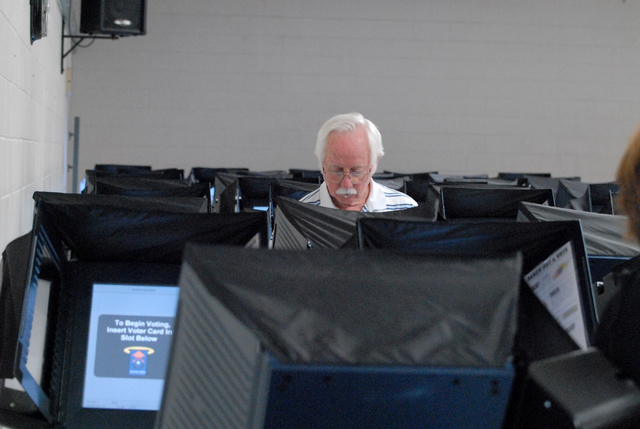 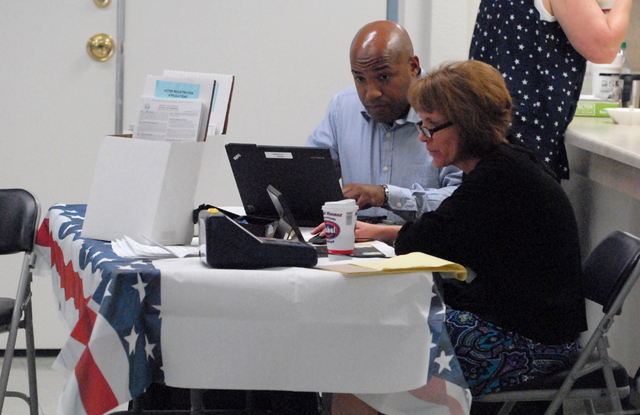 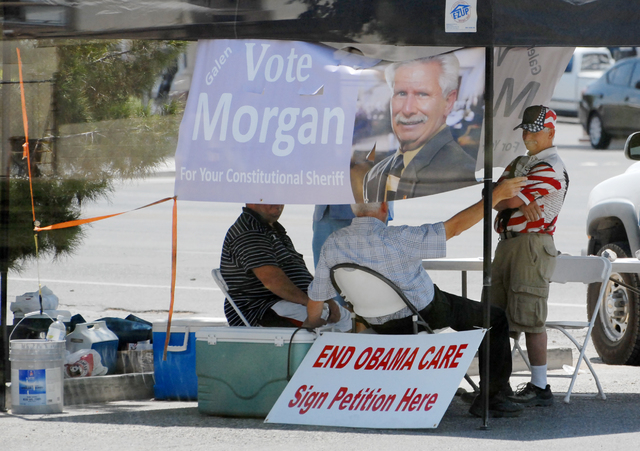 Wehrly had 1,035 votes for 24.06 percent of the early vote, the absentee and the mail-in ballots, while Assistant Sheriff Rick Marshall was second with 748 votes, or 17.4 percent. Former Nye County Sheriff’s Capt. Bill Becht was close behind Marshall with 699 votes, or 16.3 percent. Det. Eric Murphy was running fourth, with 485 votes or 11.3 percent, while former Nevada Department of Corrections officer Galen Morgan, who billed himself as “the constitutionalist sheriff” was fifth with 454 votes, or 10.5 percent.

”I really didn’t feel that I would do this well, especially on the early voting and what not,” Wehrly said, admitting she was ecstatic with the outcome. “I run a very clean campaign, I don’t believe in smearing anybody or making innuendos. I think the voters are tired of that.”

Wehrly has a pledge to institute changes within the first 100 days in office, to change the face of the sheriff’s office. She would be the first woman sheriff in Nye County since Joni Wines in the 1980s if elected. If the early vote totals hold up in election day voting, Wehrly and Marshall will go on to the November election. Marshall spent about $32,000 on the campaign

“That’s fine with me. I expected to do well, I think all of the negative campaigning backfired on some folks. I’m there, I’m steady, I don’t change my voting habits or anything else and I’m there to support the people. Apparently they’re supporting me, what else can I ask for,” Borasky said. “I’m keeping my fingers crossed because if I don’t have to spend any more campaign money that’d be nice but I’m just hoping for the best.”

Schinhofen was well ahead of the pack in the District 5 Republican primary, with 217 votes, or 42.9 percent; David Caudle was running second in the early vote with 120 votes, or 23.7 percent. Walt Grudzinski was third with 92 votes, or 18.2 percent and Pahrump Town Board Vice-Chairman Bill Dolan was last with 77 votes, or 15.22 percent. The winner faces Democrat Bob Howard and Independent American Party candidate Rick Osborne, a former Nye County manager, in the November election.

Early on Schinhofen thought Dolan would be his main opponent, but he said later in the campaign the Nye County Republican Party Central Committee endorsed Caudle, who also got the support of the Concerned Citizens for a Safe Community.

“I just thought that the low turnout that the CCSC crowd would turn out more voters,” Schinhofen said. Regarding his vote count, he said, “It’s very heartening to me. I’m happy. I hope these numbers stay, if they stay the way they are the people think I did a good job and want me to do it again.”

Schinhofen said he’d work the November election to get votes, but said Howard just wants to strengthen the sign ordinance and Osborne is a life-long bureaucrat.

Personal property appraiser Sheree Stringer and incumbent Shirley Matson were poised to go on to the general election in November in the assessor’s race, but Stringer had a comfortable 43.6 percent of the vote, 1,022 votes, to Matson’s 643 votes, or 27.5 percent. Restaurant owner Leonardo Blundo was well behind in third with 275 votes, or 11.8 percent. Former Virginia Beach appraiser Richard C. Marshall was fourth with 238 votes, or 10.2 percent and Albert “Nick” Bradshaw IV, the only Tonopah resident running for countywide office, was last with 163 votes, or 6.7 percent.

Nye County District Attorney Brian Kunzi was well ahead of controversial former Eighth District Judge Nicholas Del Vecchio in the sole Democratic primary in Nye County, with 842 votes, 70.8 percent, to Del Vecchio’s 347 votes, or 29.2 percent. The winner faces Republican Angela Bello in November, who was unopposed on the Republican side.

Deputy Public Administrator Robin Dorand-Rudolf was leading in the public administrator race with 1,006 votes, 45.4 percent, which would put her in the November election facing Bob Pilkington, who was second with 648 votes, 29.22 percent. Robert “Butch” Dole was facing elimination from the race with 564 votes, 25.4 percent.

Kent Jasperson was well ahead in the non-partisan justice of the peace race with 2,260 votes or 66.6 percent, Anita Springs finished second with 791 votes, 23.3 percent, while Nathan Gent, who announced later he was withdrawing from the race, had 344 votes, 10.1 percent.

Farther up the ticket, Pahrump Town Board member Harley Kulkin was trailing Assemblywoman Lucy Flores in Nye County in the Democratic primary for lieutenant governor, Flores was leading with 667 votes, 54.7 percent, to Kulkin’s 300 votes, 24.6 percent after early vote results.

Tea Party Republican Niger Innis was leading Assemblyman Crescent Hardy in the Republican Congressional District 4 primary in Nye County, 883 votes to 782, a margin of 39.4 percent to 34.9 percent. Hardy had been endorsed by the governor and other party leaders like State Sen. Pete Goiocoechea, R-Eureka.

Brian Sandoval was handily winning the Republican gubernatorial primary in Nye County with 2,059 votes, 86.3 percent. No other candidate even had 5 percent.