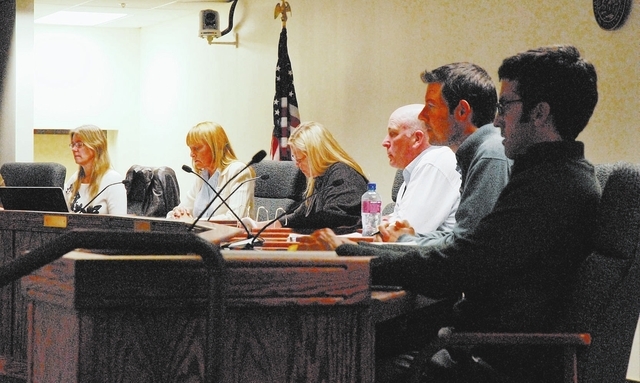 Several speakers spoke in favor of plans by Utilities Inc. of Central Nevada to spruce up the old Willow Creek golf course, though the Nevada Public Utility Commission Wednesday said the company couldn’t reopen it for golf.

While some residents see the former course as an eyesore after it closed in November 2008, bird watchers say the habitat provides a haven for migratory and resident birds.

UICN Regional Director Wendy Barnett said their initial objective is to clean up receiving ponds for their sewer plant and stabilize the property.

“It would be putting the cart before the horse to begin planning any future parkland improvements,” Barnett told attendees at a PUC consumer session.

A preferred option is to build a new five-acre, lined, receiving pond, after which an existing pond will be remediated and rebuilt, removing solids, replacing the liner and deepening the basin. It will also be equipped with aerators. Two overflow ponds will also be rehabilitated.

Pump houses in disrepair will be replaced. Areas currently irrigated on the Willow Creek course will continue to be watered, after Lake View Executive Golf Course receives its 425,000 gallons per day out of the plant, which processes an average of 600,000 gallons each day.

UICN will remove 143 dead trees, protect three trees that are active birding sites, conduct weed abatements for the back nine, remove salt cedars and apply a dust control palliative on parts of the front nine.

Richard Cantino, a resident living on the former course and member of the Red Rock Audubon Society, urged the PUC to expedite the approval of their plan. He said the receiving ponds are in dire need of remediation and the entire course is overrun with weeds that would become a fire hazard.

“These open ponds were once so clean one could see the bottom of them. This was when the owners maintained the ponds. They can and will be maintained that way again,” Cantino said.

The only alternative would be for UICN to build a new storage tank and a pipeline to dispose of the effluent at their property on Blagg Road, Cantino said. He spoke against another option to construct an underground or above ground storage tank for the effluent, which would be an eyesore and do away with valuable habitat for ducks, geese, birds and toads. The course has over 5.22 miles of paved walking trails that can be used for jogging, walking or riding a bike, Cantino said.

“There are over 435 beautiful trees on the property, there have been over 200 species of birds seen on the property, either resident or migrating through, looking for a respite on their migration,” Cantino said.

Darlene Feener said birdwatchers around the country have contacted members of the local Audubon Society after she logged sightings of 208 bird species on the old golf course in the past eight years. She listed sightings of several hawks, including a peregrine falcon, prairie falcon, red-tailed hawk, merlin, ferruginous hawk and Cooper’s hawk.

“I’m here to speak in favor of keeping the ponds full of water. We have resident birds that depend on the ponds for food and making their nest on the edge of the ponds,” Feener said. “In Pahrump, the name Willow Creek is thought of in a negative way. In the birding community, it is a place to come and see birds.”

Civic groups and organizations can come together to refocus efforts on Willow Creek that could provide the opportunity to create a nature park with walking and biking paths, Carol Cantino said.

Bob Howard asked why the 160-acre property can’t be rebuilt as a golf course.

“It would be good for the community to have a golf course if the average person could afford to play,” he said.

Barnett said there are estimates it could cost $70,000 to rehabilitate just one hole on the golf course.

PUC Chairman Alaina Burtenshaw added, “I think it’s really important before the golf course gets too far down the road that this is a utility. They would not be able to own a golf course and receive recovery for it.”

Barnett said one group asked UICN to put in a demonstration garden.

Janet Cravens asked who is going to police the former golf course.

“We have motorcycles, we have kids out there smoking pot daily, it’s just not a good sight to see,” she said.

Bob Huffman recalled when Willow Creek created a lot of growth in Pahrump after it was built by Preferred Equities Corporation in the 1970s. He said the golf course provided recreation for area kids. That was back when Pahrump only had a population of about 1,200, Huffman said. Today it’s approaching 40,000.

“It seems what I’ve heard from people they’re thinking of themselves. They got to consider we got kids growing up, they don’t have much recreation. We haven’t had much recreation in Pahrump, haven’t had any in years. The golf course is one of the greatest things. The school sent them down here to learn how to play golf,” Huffman said.

But Cantino said his group wasn’t asking for all kinds of parks or ball fields. They only want UICN to take ownership of the property and remediate the ponds.

“I believe it should go back to a golf course. You can make money on it once it’s done and done right,” Cox said. He said that would be preferable to tacking $10 on a person’s sewer bill UICN expects will be needed to recoup the cost of improvements in the next rate case.

Doug Shaw, secretary of the Lake View Golf Course LLC, said former owners of Willow Creek didn’t maintain the ponds or the pumps. Shaw said they had to get a court injunction to require them to provide water for their course, after Lake View didn’t receive any water for 30 days in 2008.

“Lake View is dependent on its survival and viability as a golf course to receive that water,” Shaw said. “It’s Lake View’s opinion that the proposal that UICN has put forth as far as remediation of the ponds is probably for the immediate phase one the best solutions because it helps us have a reliable source of water as well as a clean source because we over the years have sucked in a lot of debris and other items from the Willow Creek pond because of no maintenance. We’ve had to maintain those pumps over there because nobody is doing it. It’s our opinion if UICN’s phase one plan is adopted those problems will go away.”

The UICN plans could also increase property values around Willow Creek golf course, Shaw said. He added there’s an opportunity for the utility company to work with the Nye County School District, since Pahrump Valley High School is right across the street.

“I can’t make any promises to anyone until I get in and evaluate the property and ensure the safe and reliable operations of Plant 3 that serves over 2,500 connections, including the hospital, schools, homes and businesses. I have to take that first phase one, then I can work with members of the community on phase two,” Barnett concluded. “The refocus of Willow Creek I hope that will be a community project.”