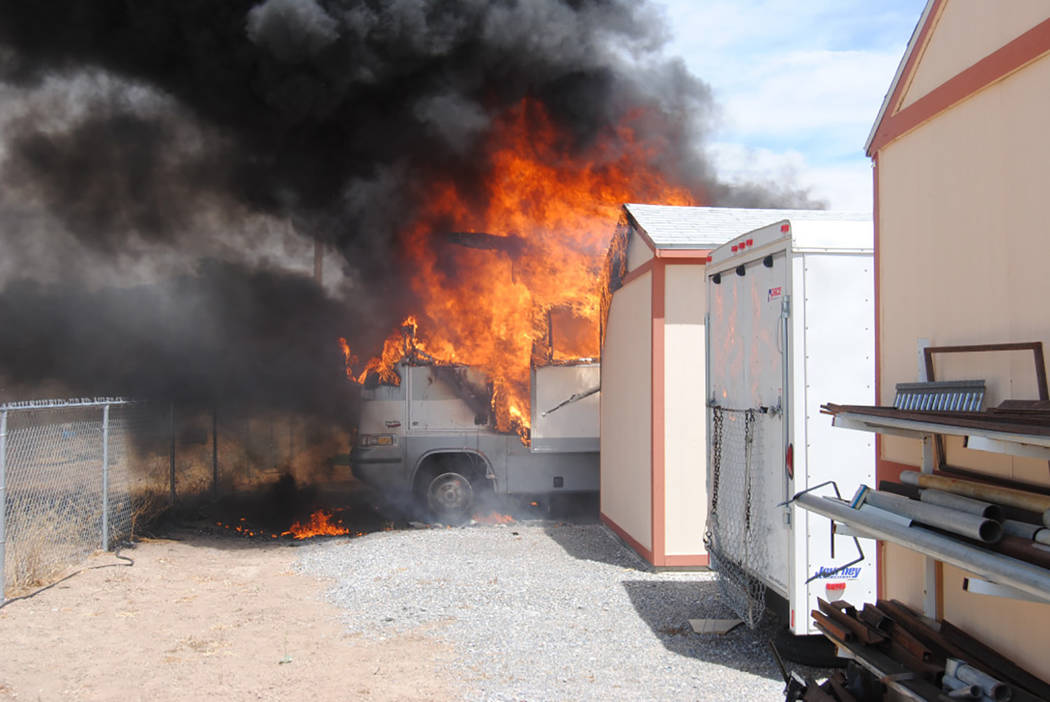 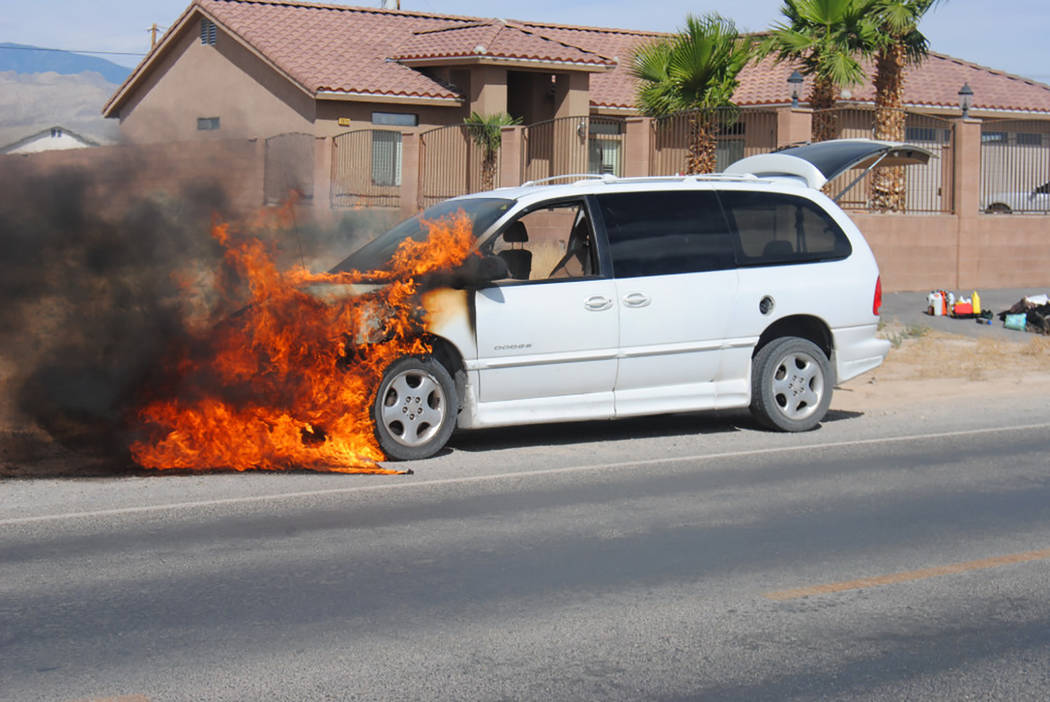 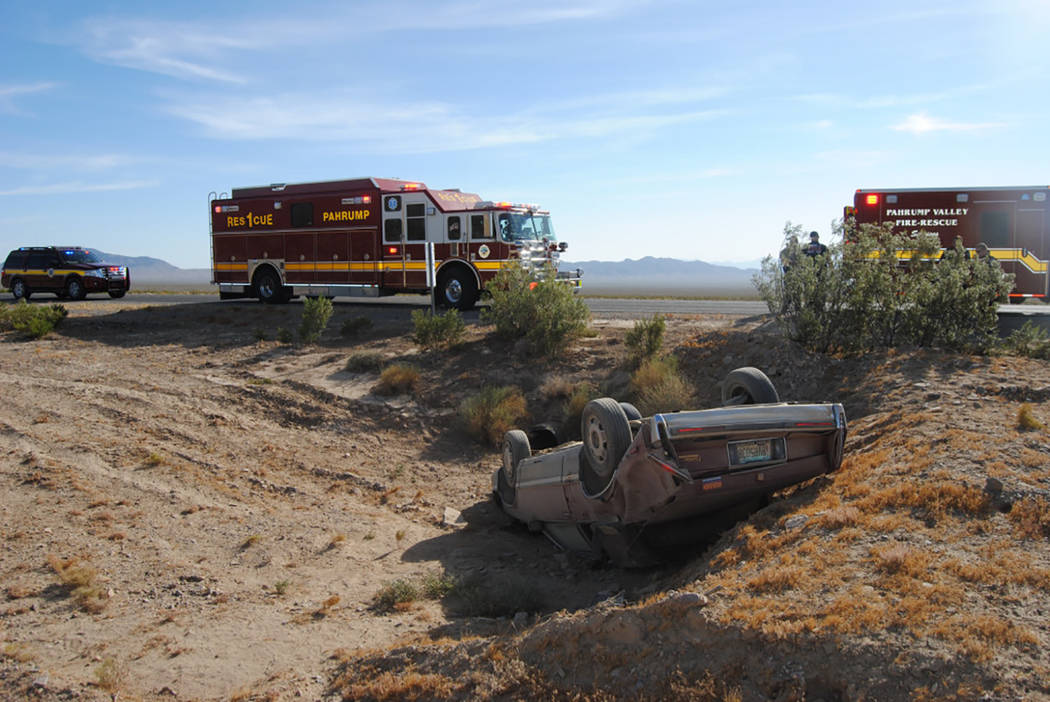 Windy conditions created additional challenges for local firefighters as they responded to numerous service calls throughout the valley.

“This was on a dirt road and it was a one-vehicle rollover accident with multiple rotations,” Lewis said. “One person was ejected and a second person egressed out of the vehicle on their own. Crews arrived upon location and found that the patient warranted a trauma center. Due to the geographical location, it was decided that it wasn’t safe to bring in Mercy Air directly to the scene, so we met with them at Desert View Hospital.”

Upon arrival, Lewis said emergency room personnel provided initial immediate care and the patient was transferred to Mercy Air at Desert View Hospital, where that patient was flown to trauma.”

Also on Wednesday, fire crews responded to a slow-moving grass fire along Stewart Valley Road near Highway 372, just after 10:30 a.m.

That fire was quickly extinguished without incident, Lewis said.

At 2:25 p.m., crews were dispatched to the area of Gamebird and Blagg roads for a brush fire, running alongside the roadway.

There were no immediate exposures and Lewis said the fire was quickly controlled without incident.

Roughly two hours later, fire crews were dispatched to the area of Highway 160 on the Pahrump side of the Crystal turn-off for a one-vehicle rollover accident.

“Upon arrival, the vehicle was well off the roadway and ended up down in an embankment resting on its roof,” Lewis said. “There was one person mechanically trapped inside the vehicle. Our Heavy Rescue One apparatus responded, along with Medic 5 and extricated that patient without incident. Patient care was transferred to Mercy Air, who flew the patient from the scene to UMC Trauma in Las Vegas.”

On Thursday fire crews were dispatched to the 4300 block of Medicine Man Road for a wind-driven motorhome fire at 2:19 p.m.

“Upon arrival, we found a Class-A motorhome sandwiched between two accessory outbuildings at the rear of the property,” Lewis said. “That motorhome was well involved in fire and extended to at least one of the nearby structures. That fire was quickly contained along with that structure with minimal damage.”

Lewis noted the motorhome was 50 percent consumed by the fire.

“Again, that fire was windswept and there were exposures to the next door neighbor’s property, which was also protected. The fire was quickly contained and controlled without any further extension and there were no injuries.”

Minutes later, fire crews were summoned to the area of Brian and Georgia streets for a brush fire.

Though it was initially reported as a small ground-cover blaze, the fire was quickly driven by the winds.

“It went from approximately a 20-to-30-square-foot fire, to a one-acre fire in a very short period of time,” Lewis said.

“It was a ground-cover fire with mixed fuels and mesquite groves. There were structure exposures in the area. However, crews protected them early on. A power pole was also on fire and Valley Electric crews responded and later replaced that pole. There were no injuries, but we had several callbacks to that particular area because of the windswept conditions, where the fire migrated underneath and was popping up in different areas.”

Just a short time later, crews were dispatched to the area of Dandelion Street and Mount Charleston Avenue for a passenger vehicle fire just after 4 p.m.

“Upon arrival, we found a well-involved Dodge Caravan which was converted into handicapped use,” Lewis said. “The occupant was out of the vehicle and placed in a safe area. Crews arrived and extinguished that fire with no extensions. However, there was heavy damage to the van.”

While traveling to southern California on early Friday afternoon, Lewis encountered what appeared to be a serious car accident with entrapment along the isolated Highway 127.

“My wife and I were on our way to California, and as we were driving down through Shoshone, we came across a one-vehicle rollover accident with a fourteen-year-old trapped inside the vehicle,” Lewis said.

At the time, Lewis said an Inyo County Sheriff’s deputy was on location where the deputy relayed information to Nye County dispatch via his radio, due to lack of cell phone service in the area.

“They were able to get ahold of our dispatch and send a heavy rescue apparatus along with a medic unit,” Lewis said. “They got those crews rolling, as well as the Inyo crews who were on their way.”

Prior to the additional crews’ arrival, Lewis said he and the deputy managed to stabilize the patient.

“We were able to extricate that patient, and Mercy Air was brought to the scene where that patient was subsequently flown to UMC Trauma in Las Vegas,” Lewis said. “Our crews arrived on scene and took two additional patients to Desert View Hospital.”

At 3:40 p.m., crews were dispatched for a two-vehicle, T-bone motor vehicle collision, with injuries on Money Street at Gamebird Road.

While there was no entrapment, Lewis said at least two people were transported to Desert View Hospital.

On the issue of fires throughout the valley, Lewis said residents should be mindful of Pahrump’s burn moratorium, which began more than 30 days ago.

“Despite the burn moratorium, there were several unauthorized controlled burns despite the windy weather conditions, but they were quickly extinguished,” he said. “Temperatures are supposed to rise over the next several days, and we’ve had five consecutive days of high fire warnings as well as red flag warnings due to the high temperatures, low relative humidity and windswept conditions, which are the perfect conditions for significant fires.”