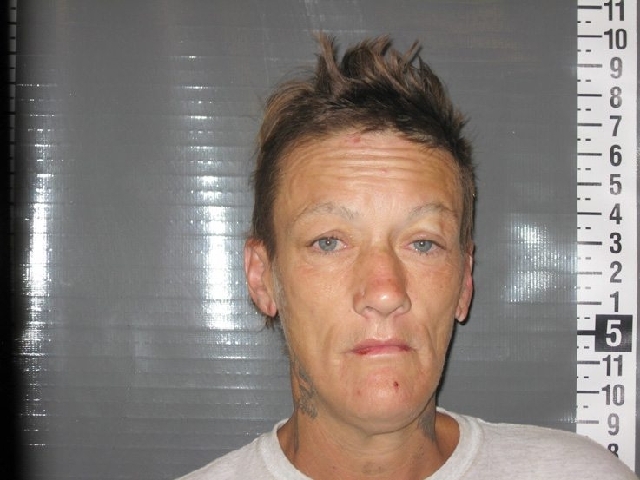 Police arrested one woman following a bizarre incident at an elderly man’s home last week that left him with multiple injuries.

Edna Crawford, 50, is accused of breaking into the man’s home in the middle of the night and battering him with his own walking cane.

She was taken into custody on charges of battery with intent to kill an elderly or vulnerable person, burglary, battery with a deadly weapon, break/injure/tamper with a vehicle with less than $250 in damages and two counts of destroy property of another with damages between $250 and $5,000.

According to an arrest report, on Aug. 1 just before 3 a.m., a Nye County Sheriff’s deputy was dispatched to a home in the 3800 block of Dyer Road for a report of a weapons offense. A neighbor called police telling dispatchers she thought she heard a gunshot and saw a flash in front of the residence.

When the officer arrived, he reportedly encountered Crawford in the front yard holding a hammer in her right hand and talking to herself.

The deputy told Crawford to put the item down and then had her relocate to the street.

Crawford allegedly told the officer there was a man in the main residence who barricaded himself inside, possibly with a weapon, and was acting strange. She allegedly further stated the man had a bomb and was growling at her.

The officer noted in Crawford’s arrest report that while she was telling him this story she was behaving bizarrely and could not stop talking.

When other deputies arrived on scene they made entry into the home where they encountered the 76-year-old victim who appeared to be suffering from multiple lacerations across his body.

The victim told police Crawford broke the windows to the home and made her way inside. He said he was unsure how she got in because he locked both the front and back doors.

Several windows around the home were reportedly broken as well, including a window next to the back door, which was open.

The victim said after Crawford broke in she took his cane from him and beat him with it while telling him she was going to kill him.

The cane, a black, four-legged version with rubber cushions on the bottom was located on the kitchen floor.

As deputies took a closer look at the home, the victim’s rear-view mirror from his vehicle was found lying in the front yard and there were holes on the outside walls of the structure.

Additionally, police found a glass electric meter had been broken and a wind chime and American flag tossed on the ground in the front yard.

When a deputy asked why she beat the victim, Crawford said she was trying to stop him from hurting people with the bomb he had inside the house.

Medics were called to the scene to treat the 76-year-old man who was eventually transported to Desert View Hospital for further care.

The woman was transported to the Nye County Detention Center to be booked into custody.

As she was being booked, she allegedly told deputies next time she will just let the man hurt people with the bomb and not do anything to stop him.

The arrest report did not note the discovery of any explosives inside the man’s home.

According to jail deputies, Crawford was scheduled to be released from custody Thursday afternoon as no charges had been filed by the district attorney’s office and a week had already passed since her arrest.

District Attorney Brian Kunzi said the reason charges haven’t been filed yet is the NCSO needed additional time to conduct further investigation into the details of the incident before turning over a full report to his office. The report wasn’t submitted until late Wednesday afternoon and there wasn’t enough time for one of the deputy district attorneys to go through all the material and file charges by Crawford’s next court appearance early the following morning.

Kunzi added after speaking with the prosecutor handling the case that charges are likely forthcoming.

“We’ve got such a short period of time to get cases filed and part of the issue is we can’t just keep innocent people in jail until we do. People are presumed innocent,” he said.