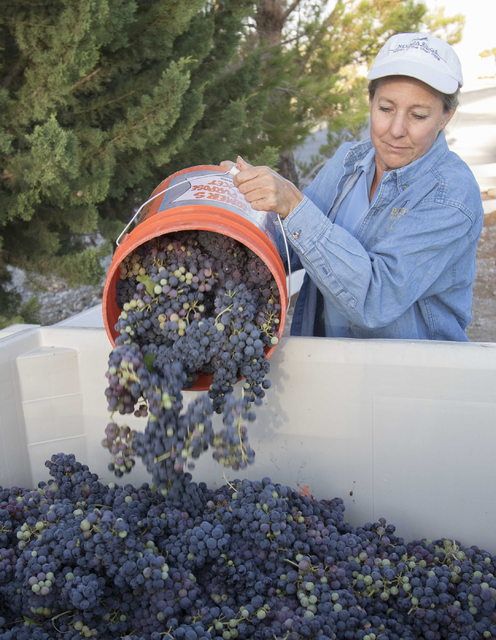 Winemaker Gretchen Loken dumps a bucket of red zinfandel grapes into a crate ready for transport during a grape harvest at the Pahrump Valley Winery in Pahrump, Nev., Thursday, Aug. 11, 2016. Richard Brian/Special to the Pahrump Valley Times

Nevada lags significantly behind all other states in the number of established wineries and vineyards. Statistically, we are near the bottom for number of wineries in the United States and dead last compared to all Western states.

Nevada currently has four federally bonded commercial wineries. Two wineries in Pahrump, one in Carson City, and one in Fallon. The next lowest number per state is Utah, where there are 10-plus wineries. After that the numbers jump significantly: Idaho has 55-plus wineries, Arizona 60-plus, Colorado 100-plus, Oregon 566-plus, Washington 850-plus, and of course the state that has the most wineries, California with over 3,600.

Arizona is as hot and dry as Southern Nevada if not hotter and dryer. In nearby Kingman, there are two wineries open now with two more planted and opening soon. Sedona, north of Phoenix, has over a dozen wineries. Southeastern Washington’s climate is similar to northern Nevada, and it is the major producing region for Washington State.

Alfalfa has been the predominant agriculture crop in Nevada but it consumes a lot of water. Most of the alfalfa that is grown in Nevada is shipped out of state with much of the alfalfa cubed and shipped to China. Wine grapevines return a significantly higher profit per acre than other agriculture products while using less water.

But to convince Nevada farmers to add grapevines to their production means that there has to be a market to buy the grapes. That means more Nevada wineries need to be opened to create more demand for locally-grown wine grapes. It’s a chicken and egg proposition. Farmers won’t plant an agriculture crop without buyers for their crop and wineries can’t make wine without grapes to crush.

It takes at least three to four years from the initial planting of a vineyard to producing quality grapes for wine production. Peak production is generally reached around year six, and vines will continue to produce for 30 to 70 years depending on the type and conditions.

In Washington, Chateau St. Michelle was the first winery in the state and is the largest wine producer. To meet their production needs they contract with vineyards to purchase all of the grapes that meet their quality standards. One such vineyard in Prossor, Washington is Andrews Family Vineyard.

Their farmland has been a major producer of cattle feed dating back to the turn of the century. They were also known for raising quality beef and would sell bulls at the annual Nugget Bull Sale in Reno. About 20 years ago they planted their first grapevines and over time they have converted their entire farm to grapevines. They now have over 1,800 acres planted and sell everything that they can produce.

In the United States, many wine-producing regions were started with wine hobbyists planting grapevines on their property and then learning to make wine.

Over time they grew the size of their vineyards and perfected their wine making. Soon their neighbors started planting grapevines and making wine. Eventually these hobbyist vineyards and wineries grew to the point where they had wine to sell and became federally-bonded wineries.

Wine trails were established and visitors would plan on spending a day or weekend in a particular area visiting several wineries. One such area is along the Western Sierra foothills along Highway 49 below Sacramento. There you will find dozens of small and large wineries that were started by wine enthusiasts who first planted grapevines. Eventually these areas become well known for the unique properties of wines from their area and establish an American Viticultural Area, or AVA.

The AVA is a designated wine grape-growing region in the United States distinguishable by geographic features, with boundaries defined by the Alcohol and Tobacco Tax and Trade Bureau of the United States Department of the Treasury. Nevada currently does not have a single AVA.

The Pahrump/Amargosa region has the potential to be Nevada’s first AVA. We have the state’s two largest and most successful wineries located here. We have several vineyards that are producing quality wine grapes for wine making.

The largest winery, Pahrump Valley Winery, sells over 9000 cases of wine annually and with their vineyard partners are aggressively planting vineyards here.

This last harvest season they harvested 35 tons of Nevada grapes. They have just finished planting 3,000 new vines in Amargosa and will plant 3,000 more in the spring. This region is producing high-quality wine grapes and there is demand for the grapes.

In Fallon, one hour east of Reno, the Frey Family Vineyard is the only Northern Nevada winery with vines, production, and tasting room onsite. But there are three new wineries opening in downtown Reno with two more in the planning stages. These urban wineries will have their wine production equipment in their downtown Reno tasting rooms and will source grapes from both their own vineyards and contracted vineyards.

The urban winery is a successful business model and a great example of this can be seen in the Woodinville area near Seattle, Washington. In Woodinville there are over 100 urban wineries located in two distinct areas, the Hollywood Schoolhouse District and the Warehouse District. Most are small wineries producing 500 cases or less annually. All of them source their grapes primarily from growers in the Yakima and Walla Walla areas. Woodinville is also home to two of Washington’s biggest wineries, Chateau St. Michelle and Columbia. The area has become a great day trip destination for wine tasting, food, and sightseeing.

In the northern half of the state there are established vineyards but more are needed to meet the upcoming demand. Wineries will have to source the majority of their grapes from California until more vines can be planted and matured. There is a strong network of hobbyist vineyards and winemakers in the valleys surrounding Reno, and Washoe County recently passed regulations allowing wineries in rural residential areas to help establish a “wine trail” outside of Reno for tourism. Many of those hobbyist vineyards and winemakers are taking advantage of the new regulation and are in the process of converting to small commercial wineries. It is not hard to envision the Reno area growing into an up and coming winery area.

If we chose to act the Pahrump area can be the leader in wineries in Nevada. Wineries attract both local residents and tourists. Bill Loken with Pahrump Valley Winery states that the majority of their visitors come from Las Vegas. Pahrump has some distinct advantages over the northern part of the state for wineries.

The largest population base in Nevada is just one hour away in Las Vegas. Importantly, there is experience here to draw from. There are two well-established wineries in town. There are several vineyards with a track record of producing quality wine grapes. There is room to plant more vineyards that take far less water than current crops.

Having several wineries in the same area brings more visitors because several wineries to visit create an ideal “day trip.” Government officials should be encouraged to look at the regulations and develop a plan to attract wineries for a wine trail. Vineyards can be planted here and there will be a market for those grapes. A Pahrump chapter of the American Wine Society has been recently formed to promote wine, wine making, and vineyards.

Creating an AVA and making this a known winery region takes vision, hard work, and passion but it would grow our economic base and help change our image in a very positive way. As a “day-trip” destination we would not be held back by the lack of hotels and services.

Many of the visitors would be from Las Vegas and we could change their perception of our area. We have an opportunity before us. Pahrump could become a cool “go-to” destination for visitors and entirely change our image to a much more positive one.

Will we choose to lead with the spirit of our pioneers or do we stay stuck in a time warp?