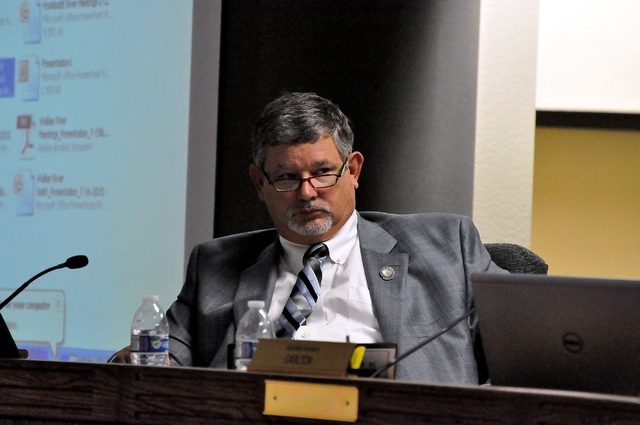 In a recent letter to the editor, Pahrump resident Tim Burke claimed that Dennis Hof, who is running against Assemblyman James Oscarson, is trying to “smear his opponent.”

Sorry, but it’s not a “smear” to tell the truth about a politician. And here’s the truth…

Assemblyman Oscarson ran as a conservative Republican who opposed taxes – then went to Carson City last year, got wined and dined by the governor and a bunch of high-priced lobbyists who whispered sweet nothings in his ear, and betrayed his constituents by voting for the largest tax hike in state history.

Assemblyman Oscarson is now trying to cover his keester to get re-elected by claiming he voted for that $1.4 billion tax hike “for the children” and is desperately trying to deflect criticism of his sell-out by making his entire campaign about Mr. Hof’s business.

A business, by the way, that has been legal in Nye County for decades and pumps hundreds of thousands of dollars into our local economy and government.

Mr. Burke also suggested that should Mr. Hof win as an independent candidate, and he would get “no committee memberships, no chairmanships, and hence no clout to protect the interests of Pahrump and Nye County residents.”

As the former assemblyman representing this district, I can assure you Mr. Burke doesn’t know what he’s talking about. That’s not how the “game” is played.

The reality is this: Should the Assembly be closely divided after November’s elections – and it will be – both sides of the aisle are going to be coming to Mr. Hof for his support.

So the truth is, Mr. Hof will be in the proverbial “cat bird’s” seat and his influence will be FAR greater and FAR more beneficial to the residents of Pahrump and Nye County than anything Mr. Oscarson could even dream about.

Secondly, Mr. Oscarson was a committee chairman last year – and proceeded to vote for 29 out of 32 proposed tax and fee increases. If that’s “protecting” the interests of Pahrump and Nye County residents then I have one request: PLEASE STOP PROTECTING US!

I voted for Mr. Oscarson in the last election. He fooled me. He fooled you. He broke his word. He betrayed our trust. As such, he doesn’t deserve another term representing us in Carson City. That’s why I’m voting for Dennis Hof. And I hope you will, too.

Ed Goedhart is the former Nevada State Assemblyman for District 36