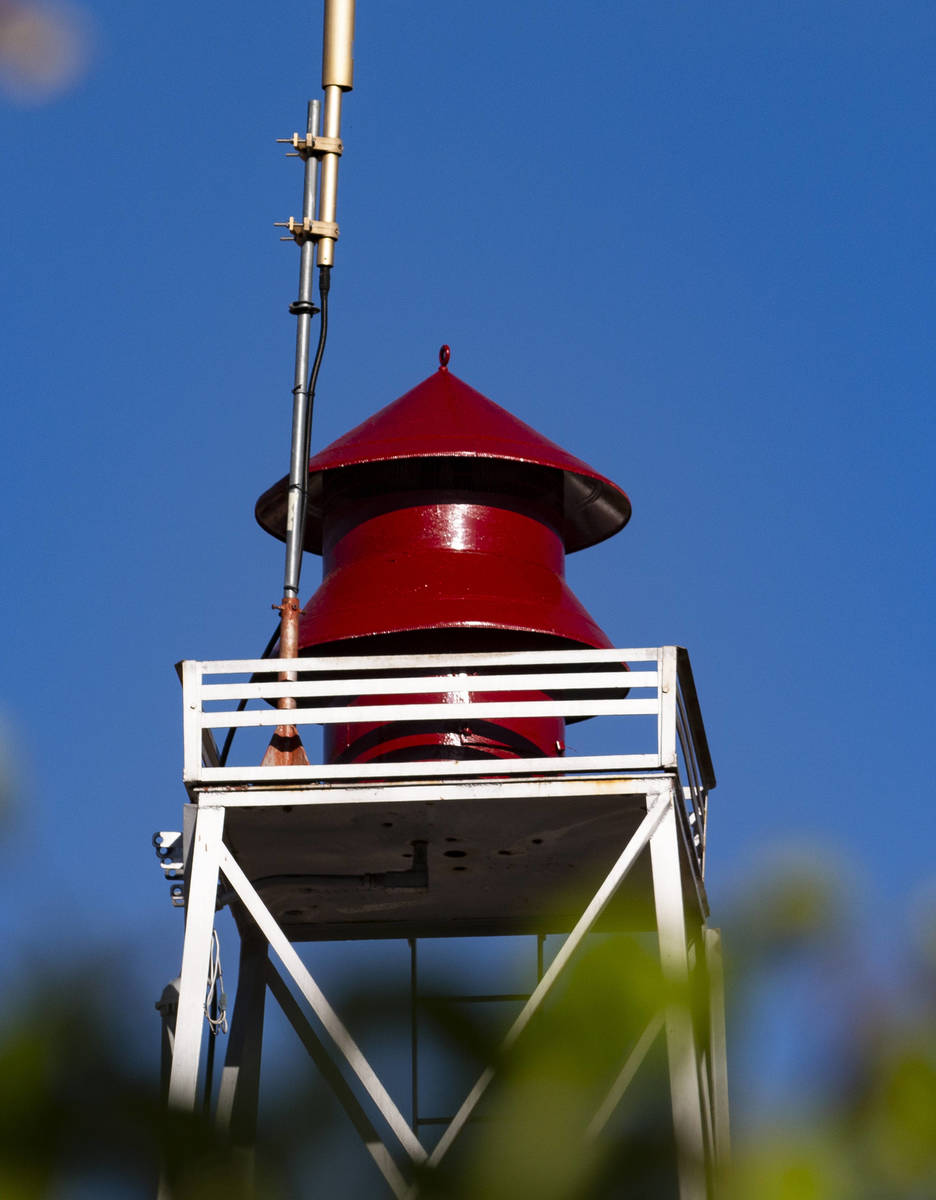 Colton Lochhead/Las Vegas Review-Journal The siren in Minden pictured on May 11, 2021.

I asked my German friend, who was my tour guide, “Why haven’t the buildings been restored?” Everywhere else in Germany, the buildings were pristine and beautiful. He told me, “It is to remind us of a time when we were stupid sheep and followed an insane man blindly into war. If we cover up our mistakes, the generations that follow will not see our failure and might make the same mistake.”

There is a difference between remembering a historical figure or event and celebrating that person or event. I attended a convention in New Orleans in the summer of 1980 during the World’s Fair. I vividly remember the opening of the convention, which had about 2,500 men in attendance. The convention opened with the playing of our national anthem, the “Star-Spangled Banner”, followed by the playing of “Dixie”, the confederate anthem from the Civil War. Many of the young men in attendance jumped to their feet, hooting and hollering during its playing. I remember sitting there in stunned silence, thinking to myself, “Oh my God, they don’t know they lost the war.” This was 115 years after the end of the Civil War.

In the United States, there has been an accelerating “cancel culture” movement to remove statues and to rename landmarks, mascots, professional sports teams’ names, and anything else that certain groups now deem offensive. After the death of George Floyd, statues were torn down during the riots that followed. In many cases, the rioters tore down Civil War statues and those of persons who were famous for being “anti-slavery.”

In an August 2017 statement on the monuments controversy, the American Historical Association (AHA) said that to remove a monument “is not to erase history, but rather to alter or call attention to a previous interpretation of history.” The AHA stated that most monuments were erected “without anything resembling a democratic process,” and recommended that it was “time to reconsider these decisions.” According to the AHA, most confederate monuments were erected during the late-nineteenth and early-twentieth century. This undertaking was “part and parcel of the initiation of legally mandated segregation and widespread disenfranchisement across the South.” According to the AHA, memorials to the confederacy erected during this period “were intended, in part, to obscure the terrorism required to overthrow Reconstruction, and to intimidate African Americans politically and isolate them from the mainstream of public life.” A later wave of monument building coincided with the civil rights movement, and according to the AHA, “these symbols of white supremacy are still being invoked for similar purposes.

Amendment No. 539 (also submitted by Assemblyman Watts) goes even further, prohibiting a county, city, or unincorporated town from sounding specific sirens, alarms, or bells. That amendment was aimed directly at the Nevada town of Minden, which historically has played a siren at noon and 6 p.m. each day. Many other towns in Nevada still play a siren, most often at noon. In other towns, and even in other countries, church bells might be substituted for sirens and played at noon and sunset. Historically, many small towns in the United States used blasts from a daily siren in the late afternoon to signal that people of color needed to get out of town before darkness fell. The county of Douglas, Nevada, did indeed have such an ordinance enacted in 1908 but later removed. Assemblyman Watts states that the bill had the backing of Nevada tribal leaders who found the town of Minden’s siren a reminder of historical discrimination.

Assemblyman Hafen (District 36) voted against the amendment, stating that “it was an overreach of the State Legislature to dictate to a small town in Nevada what they should do with their daily siren.” Officials in the tiny Douglas County town said they had no interest in abiding by the recently amended legislation.

Town Manager J.D. Frisby also went on to state, “There’s a (Minden) ordinance in place right now that says that the siren sounds every day in commemoration of our first responders. It never went off at 6:30, when the county had an ordinance to get Native Americans out of town.” Frisby adds that some residents enjoy the siren as a nostalgic “dinner bell” and dismisses the tribe’s concerns by comparing it to people objecting to church bells. “Where does it stop, you know? I could tell you the Lutheran bells that chime all day long are offensive to me, but being offended is a choice. At what point do we roll over and give up to everything someone is offended by?”

It is an emotional controversy, one that has many sides. But Manager Frisby makes a good point, when do we choose to stop being offended by everything?